Mellifont Abbey located in County Louth
County Louth
County Louth is a county of Ireland. It is part of the Border Region and is also located in the province of Leinster. It is named after the town of Louth. Louth County Council is the local authority for the county...
, was the first Cistercian abbey
Abbey
An abbey is a Catholic monastery or convent, under the authority of an Abbot or an Abbess, who serves as the spiritual father or mother of the community.The term can also refer to an establishment which has long ceased to function as an abbey,...
to be built in Ireland
Ireland
Ireland is an island to the northwest of continental Europe. It is the third-largest island in Europe and the twentieth-largest island on Earth...
. 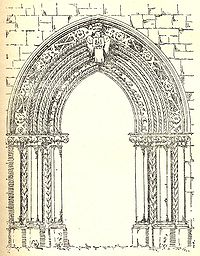 Founded in 1142 on the orders of Saint Malachy
Saint Malachy
Saint Malachy was the Archbishop of Armagh, to whom were attributed several miracles and a vision of the identity of the last 112 Popes...
, Archbishop of Armagh
Armagh
Armagh is a large settlement in Northern Ireland, and the county town of County Armagh. It is a site of historical importance for both Celtic paganism and Christianity and is the seat, for both the Roman Catholic Church and the Church of Ireland, of the Archbishop of Armagh...
, Mellifont Abbey sits on the banks of the River Mattock, some ten km (6 miles) north-west of Drogheda
Drogheda
Drogheda is an industrial and port town in County Louth on the east coast of Ireland, 56 km north of Dublin. It is the last bridging point on the River Boyne before it enters the Irish Sea....
.

By 1170, Mellifont had one hundred monks and three hundred lay brothers. The Abbey became the model for other Cistercian abbeys built in Ireland, with its formal style of architecture imported from the abbeys of the same order in France; it was the main abbey in Ireland until it was closed in 1539, when it became a fortified house.

An important synod
Synod
A synod historically is a council of a church, usually convened to decide an issue of doctrine, administration or application. In modern usage, the word often refers to the governing body of a particular church, whether its members are meeting or not...
was held in Mellifont in 1152 as recorded in the Annals of the Four Masters
Annals of the Four Masters
The Annals of the Kingdom of Ireland or the Annals of the Four Masters are a chronicle of medieval Irish history...
, which states that the synod was attended by bishops and kings along with the papal legate John Paparo (Saint Malachy having died some ten years beforehand). The consecration of the church took place in 1157 and asserted Church authority by banishing the King of Meath, Donnchadh Ua Maeleachlainn.

Various kings gave donations to assist this foundation: Muirchertach Ua Lochlainn, provincial king of Ulster, gave cattle, some gold
Gold
Gold is a chemical element with the symbol Au and an atomic number of 79. Gold is a dense, soft, shiny, malleable and ductile metal. Pure gold has a bright yellow color and luster traditionally considered attractive, which it maintains without oxidizing in air or water. Chemically, gold is a...
and also a local town land, Donnchad Ua Cearbhall, the king of Airgialla (Oriel
Oriel
An oriel window is a type of bay window which projects from a wall.Oriel may also refer to:Places in the United Kingdom:*Oriel College, Oxford*Oriel Street, Oxford*Oriel Square, Oxford*Oriel Chambers, LiverpoolPlaces in Ireland:...
), who had donated the land, also gave gold, while Derbforgaill
Derbforgaill
Dearbhfhorghaill , anglicized as Derval, was a daughter of Murchad Ua Maeleachlainn, king of Meath, and of his wife Mor , daughter of Muirchertach Ua Briain...
, the wife of Tigernan Ua Ruairc
Tigernán Ua Ruairc
Tighearnán Mór Ua Ruairc , anglicized as Tiernán O'Rourke ruled the Kingdom of Bréifne as the 19th king in its Ua Ruairc dynasty...
gave gold, a chalice
Chalice (cup)
A chalice is a goblet or footed cup intended to hold a drink. In general religious terms, it is intended for drinking during a ceremony.-Christian:...
and altar cloth
Altar cloth
An ' is used by various religious groups to cover an altar. Christianity, ancient Judaism, and Buddhism are among the world religions that use altar cloths....
s.


The Abbey since closure

Mellifont Abbey is now a ruin. Little of the original Abbey remains, save a 13th-century lavabo
Lavabo
A lavabo is a device used to provide water for the washing of hands. It consists normally of a ewer or container of some kind to pour water, and a bowl to catch the water as it falls off the hands. In ecclesiastical usage it refers to both the basin in which the priest washes his hands and the...
(where the monks washed their hands before eating), some Romanesque
Romanesque architecture
Romanesque architecture is an architectural style of Medieval Europe characterised by semi-circular arches. There is no consensus for the beginning date of the Romanesque architecture, with proposals ranging from the 6th to the 10th century. It developed in the 12th century into the Gothic style,...
arches and a 14th-century chapter house
Chapter house
A chapter house or chapterhouse is a building or room attached to a cathedral or collegiate church in which meetings are held. They can also be found in medieval monasteries....
.