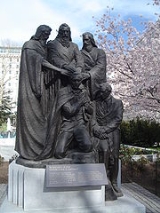 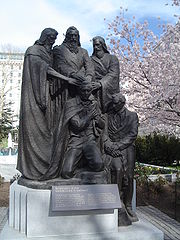 
Restoration of the Melchizedek Priesthood

For the Aaronic priesthood, Joseph Smith, Jr. and Oliver Cowdery
Oliver Cowdery
Oliver H. P. Cowdery was, with Joseph Smith, Jr., an important participant in the formative period of the Latter Day Saint movement between 1829 and 1836, becoming one of the Three Witnesses of the Book of Mormon's golden plates, one of the first Latter Day Saint apostles, and the Second Elder of...
had said they were visited by John the Baptist
John the Baptist
John the Baptist was an itinerant preacher and a major religious figure mentioned in the Canonical gospels. He is described in the Gospel of Luke as a relative of Jesus, who led a movement of baptism at the Jordan River...
, who laid his hands on their head and gave them the priesthood. Unlike this restoration, however, which Smith described in detail and gave an exact date when it happened, Smith never gave a description of any vision in which he saw an angel separately confer the Melchizedek priesthood. However, by the turn of the 20th century, Latter Day Saint theologians believed that such a separate ordination by angels had occurred prior to the organization of the Church of Christ on April 6, 1830. This was largely because the early church organization contained the office of elder, which at least by 1835 was considered an office of the Melchizedek priesthood. As evidence for such a pre-organization angellic conferral, writers referred to a revelation in which Smith said he heard "The voice of Peter, James, and John in the wilderness between Harmony, Susquehanna county, and Colesville, Broome county, on the Susquehanna river, declaring themselves as possessing the keys of the kingdom, and of the dispensation of the fulness of times!" Thus, most Mormons suppose that Smith and Cowdery were visited by the three angels in 1829 and that they conferred the Melchizedek priesthood in the same way John the Baptist had conferred the Aaronic priesthood.

However, the official church history, supervised or written by Smith, states that "the authority of the Melchizedek priesthood was manifested and conferred for the first time upon several of the Elders" during a General Conference in early June 1831. When Smith's official history was first published in 1902, the compiler B.H. Roberts thought that this was a mistake, because it would not be consistent with the common Mormon belief that the priesthood had been conferred prior to the church's founding in 1830.

However, some recent Mormon historians accept Smith's history as correct and consistent with other historical records showing that other Mormons present at the conference dated the restoration of the Melchizedek priesthood to 1831. This conference had been a very significant event in the early church history, coming soon after the conversion of Sidney Rigdon
Sidney Rigdon
Sidney Rigdon was a leader during the early history of the Latter Day Saint movement.-Baptist background:...
, who believed that Mormon missionaries lacked the necessary power to adequately preach the gospel. Thus, in January 1831, Smith issued a revelation where he wrote that after Mormons relocated to Kirtland
Kirtland, Ohio
Kirtland is a city in Lake County, Ohio, USA. The population was 6,670 at the 2000 census. Kirtland is famous for being the early headquarters of the Latter Day Saint movement.-Origins of Kirtland:...
, Ohio
Ohio
Ohio is a Midwestern state in the United States. The 34th largest state by area in the U.S.,it is the 7th‑most populous with over 11.5 million residents, containing several major American cities and seven metropolitan areas with populations of 500,000 or more.The state's capital is Columbus...
, they would "be endowed with power from on high" and "sent forth". In a revelation given to an individual, Smith assured the man that "at the conference meeting he [would] be ordained unto power from on high". One of Smith's associates that was present at the conference expressed the view that this ordination "consisted [of] the endowment--it being a new order--and bestowed authority", and later that year, an early convert who had left the church claimed that many of the Saints "have been ordained to the High Priesthood, or the order of Melchizedek; and profess to be endowed with the same power as the ancient apostles were". In 1835, the historical record was muddled a bit when the first edition of the Doctrine and Covenants
Doctrine and Covenants
The Doctrine and Covenants is a part of the open scriptural canon of several denominations of the Latter Day Saint movement...
altered pre-1831 revelations to make a distinction between the Aaronic and Melchizedek priesthoods, and to classify the offices of elder and apostle as part of the Melchizedek priesthood.

In The Church of Jesus Christ of Latter-day Saints (LDS Church), the largest Latter Day Saint
Latter Day Saint movement
The Latter Day Saint movement is a group of independent churches tracing their origin to a Christian primitivist movement founded by Joseph Smith, Jr. in the late 1820s. Collectively, these churches have over 14 million members...
denomination, the Melchizedek priesthood is one of two governing priesthoods, which is typically given as a matter of course to worthy male members 18 years and older. Though typically adult men do not receive this priesthood until they have belonged to the church for at least one year, this is not a hard and fast rule and a man may be given this priesthood as soon as local church leaders feel that he is prepared. Ordination is based on the recipient's age and worthiness and does not require any specific training or aptitude. A candidate for this ordination is interviewed and often counseled to study the 84th, 107th, and 121st sections of the Doctrine and Covenants
Doctrine and Covenants
The Doctrine and Covenants is a part of the open scriptural canon of several denominations of the Latter Day Saint movement...
to begin to understand the oath and covenant of the priesthood, the covenant a person makes with God when he receives the Melchizedek priesthood. The candidate is also usually asked to stand in a gathering of the members of the church to be publicly accepted as being worthy of ordination. For male Latter-day Saints, receiving the Melchizedek priesthood is considered to be a saving ordinance of the gospel.

Shortly after the establishment of the Church, the ordination of blacks
Black people
The term black people is used in systems of racial classification for humans of a dark skinned phenotype, relative to other racial groups.Different societies apply different criteria regarding who is classified as "black", and often social variables such as class, socio-economic status also plays a...
was prohibited. Following a revelation to then-Church president Spencer W. Kimball
Spencer W. Kimball
Spencer Woolley Kimball was the twelfth president of The Church of Jesus Christ of Latter-day Saints from 1973 until his death in 1985.-Ancestry:...
, the Church lifted the prohibition in 1978.


Offices of the Melchizedek priesthood in the LDS Church

Quorums of the Melchizedek priesthood in the LDS Church


In order to be called to the Aaronic priesthood office of bishop, a man must hold the Melchizedek priesthood and be a high priest.

The counselors serve under the direction of the president and share in his responsibilities. The president may assign each counselor to handle certain areas of responsibility. The president bears the sole burden of being the final arbiter of decisions, but he is advised to receive advice from the his counselors and pay close attention to their opinions and insights.

When the president is released, the counselors are also released.