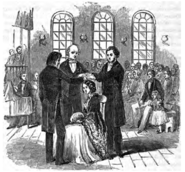 In the Latter Day Saint movement
Latter Day Saint movement
The Latter Day Saint movement is a group of independent churches tracing their origin to a Christian primitivist movement founded by Joseph Smith, Jr. in the late 1820s. Collectively, these churches have over 14 million members...
, Confirmation (also known as the Gift of the Holy Ghost or the Baptism of Fire and of the Holy Ghost
Baptism with the Holy Spirit
Baptism with the Holy Spirit in Christian theology is a term describing baptism in or with the Spirit of God...
), is an ordinance essential for salvation
Plan of salvation
According to doctrine of the Latter Day Saint movement, the plan of salvation is a plan that God created to save, redeem, and exalt humankind...
. It involves the laying on of hands
Laying on of hands
The laying on of hands is a religious ritual that accompanies certain religious practices, which are found throughout the world in varying forms....
and is performed after baptism. Through confirmation, the initiate becomes an official member of the church and receives the gift of the Holy Ghost
Holy Spirit (Christianity)
For the majority of Christians, the Holy Spirit is the third person of the Holy Trinity—Father, Son, and Holy Spirit, and is Almighty God...
. Baptism and confirmation are administered to persons at least eight years old (the age of accountability). The ordinance corresponds to the confirmation rite in many other Christian
Christianity
Christianity is a monotheistic religion based on the life and teachings of Jesus as presented in canonical gospels and other New Testament writings...
faiths. Confirmations were first performed on April 6, 1830 at the organizational meeting of the Church of Christ.

The gift of the Holy Ghost is considered the fourth of the "first principles and ordinances of the Gospel": First being "Faith in the Lord Jesus Christ; second, Repentance; third, Baptism by immersion for the remission of sins; fourth, Laying on of hands for the gift of the Holy Ghost". The Church of Jesus Christ of Latter-day Saints teaches that these two ordinances are necessary for all mankind, so they perform both baptisms and confirmations by proxy on behalf of the dead
Baptism for the dead
Baptism for the dead, vicarious baptism or proxy baptism is the religious practice of baptizing a living person on behalf of one who is dead, with the living person acting as the deceased person's proxy...
in their temples
Temple (LDS Church)
In The Church of Jesus Christ of Latter-day Saints , a temple is a building dedicated to be a House of the Lord, and they are considered by Church members to be the most sacred structures on earth. Upon completion, temples are usually open to the public for a short period of time...
.

Joseph Smith
Joseph Smith
Joseph Smith was founder of what later became known as the Latter Day Saint movement or Mormons.Joseph Smith may also refer to:-Latter Day Saints:* Joseph Smith, Sr. , father of Joseph Smith...
taught the need for both water baptism and the laying on of hands for the gift of the Holy Ghost: "The baptism of water, without the baptism of fire and the Holy Ghost attending it, is of no use," he declared. "They are necessarily and inseparably connected. An individual must be born of water and the spirit in order to get into the kingdom of God". According to standard Latter Day Saint theology, the gift of the Holy Ghost is the privilege of receiving inspiration, divine manifestations, direction, and other blessings from the Holy Spirit which are not available to those who have not received the ordinance. These include cautions, warnings, and discernment of right and wrong. The gift of the Holy Ghost is the key to all of the spiritual gift
Spiritual gift
In Christianity, spiritual gifts are endowments given by the Holy Spirit. These are the supernatural graces which individual Christians need to fulfill the mission of the church. They are described in the New Testament, primarily in , , and . also touches on the spiritual gifts...
s operating in the church, including prophecy
Prophecy
Prophecy is a process in which one or more messages that have been communicated to a prophet are then communicated to others. Such messages typically involve divine inspiration, interpretation, or revelation of conditioned events to come as well as testimonies or repeated revelations that the...
and revelation
Revelation (Latter Day Saints)
Latter Day Saints teach that the Latter Day Saint movement began with a Revelation from God . They also teach that revelation is the foundation of the church established by Jesus Christ and that it remains an essential element of His true church today...
.

The Holy Spirit is the sanctifier, and his sanctifying influence is called the "baptism of fire". Through the baptism of fire and the Holy Ghost, the heart and desires are cleansed and purified. However, confirmation is not the end but the beginning of the lifetime process of sanctification
Sanctification
Sanctity is an ancient concept widespread among religions, a property of a thing or person sacred or set apart within the religion, from totem poles through temple vessels to days of the week, to a human believer who achieves this state. Sanctification is the act or process of acquiring sanctity,...
. Receiving the Holy Ghost includes inviting him into one's daily life as a "constant companion", giving strength, guidance, and enlightenment. The performance of the ordinance alone is not enough to insure actual reception of the Spirit but depends on the humility, faith, and worthiness of the individual.

Whereas Priest
Priest (Mormonism)
Priest is a priesthood office in the Aaronic Priesthood of denominations within the Latter Day Saint movement, including The Church of Jesus Christ of Latter-day Saints.-Priests in The Church of Jesus Christ of Latter-day Saints:...
s are able to baptize, only those who have the Melchizedek Priesthood are able to confirm newly baptized members such that they can receive the gift of the Holy Ghost. The ordinance is usually performed during a baptismal service or a fast and testimony meeting
Worship services of The Church of Jesus Christ of Latter-day Saints
In Mormonism, worship services include weekly services, held on Sundays , in neighborhood based religious units...
in the following manner:
The source of this article is wikipedia, the free encyclopedia.  The text of this article is licensed under the GFDL.