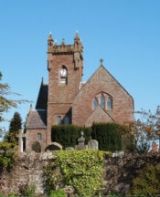 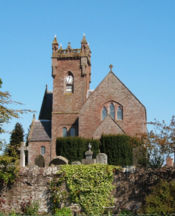 Meigle is a village in Strathmore
Strathmore, Angus and Perth & Kinross
Strathmore is a strath in east central Scotland running from northeast to southwest between the Grampian mountains and the Sidlaws....
, Scotland
Scotland
Scotland is a country that is part of the United Kingdom. Occupying the northern third of the island of Great Britain, it shares a border with England to the south and is bounded by the North Sea to the east, the Atlantic Ocean to the north and west, and the North Channel and Irish Sea to the...
. It lies in the council area of Perth and Kinross
Perth and Kinross
Perth and Kinross is one of 32 council areas in Scotland, and a Lieutenancy Area. It borders onto the Aberdeenshire, Angus, Dundee City, Fife, Clackmannanshire, Stirling, Argyll and Bute and Highland council areas. Perth is the administrative centre...
in the Coupar Angus
Coupar Angus
Coupar Angus is a town in Perth and Kinross, Scotland, situated eight kilometres south of Blairgowrie.The name Coupar Angus serves to differentiate the town from Cupar, Fife...
and Meigle ward. The nearest town is Forfar
Forfar
Forfar is a parish, town and former royal burgh of approximately 13,500 people in Angus, located in the East Central Lowlands of Scotland. Forfar is the county town of Angus, which was officially known as Forfarshire from the 18th century until 1929, when the ancient name was reinstated, and...
in neighbouring Angus
Angus
Angus is one of the 32 local government council areas of Scotland, a registration county and a lieutenancy area. The council area borders Aberdeenshire, Perth and Kinross and Dundee City...
. Other smaller settlements nearby are Balkeerie
Balkeerie
Balkeerie is a village in Angus, Scotland, north of Dundee. One kilometre to the east is the village of Eassie, which is noted for the presence of the Eassie Stone, is a carved Pictish stone....
, Kirkinch
Kirkinch
Kirkinch, meaning 'kirk on the island' in Scots and Gaelic, is a small village in Angus, Scotland. The 'island' is the knoll on which remains of the medieval church of the parish of Nevay, now united with Eassie, stand. Originally it was an 'island' of slightly higher land surrounded by boggy...
and Kinloch
Kinloch, Angus
Kinloch is a village along the A94 road near the town of Meigle in eastern Scotland. Approximately three kilometres to the east is the village of Eassie noted for the presence of the Eassie Stone; this carved Pictish stone is dated prior to the Early Middle Ages....
. Meigle is accessed from the north and south via the B954 road
B954 road
The B954 road is a public highway in Angus, Scotland which generally runs north to south, connecting the settlement of Dykends to the northwestern part of the city of Dundee. The road runs near the Meigle Museum, where a collection of Pictish stones is exhibited, and somewhat to the west of the...
. Meigle was included in the locality of Alyth
Alyth
Alyth is a village in Perth and Kinross, Scotland, situated under the Hill of Alyth five miles northeast of Blairgowrie. The village has a population of 2,301...
for the 2001 Census when the population for the division was 1871.

The Pictish stones on display at Meigle are a manifestation of the rich early history of the local area. As further testimony to the Pictish era approximately three kilometres to the east is the village of Eassie
Eassie
Eassie is a village located along the A94 road in Angus, Scotland. The church in Eassie is dedicated to Saint Fergus, a monk who worked at nearby Glamis...
noted for the presence of the Eassie Stone
Eassie Stone
The Eassie Stone is a Class II Pictish stone at the village of Eassie, Angus, Scotland. The stone was found in Eassie burn in the late 18th century and now resides in a purpose-built perspex building in the ruined Eassie church.-Location:...
; this carved Pictish stone is dated prior to the Early Middle Ages
Early Middle Ages
The Early Middle Ages was the period of European history lasting from the 5th century to approximately 1000. The Early Middle Ages followed the decline of the Western Roman Empire and preceded the High Middle Ages...
.

The Meigle Sculptured Stone Museum
Meigle Sculptured Stone Museum
The Meigle Sculptured Stone Museum is a permanent exhibition of 27 carved Pictish stones in the centre of the village of Meigle in eastern Scotland. It lies on the A94 road running from Coupar Angus to Forfar. The museum occupies the former parish school, built 1844. The collection of stones...
is housed in the former Victorian village school and contains an important collection of more than thirty Pictish Stones
Pictish stones
Pictish stones are monumental stelae found in Scotland, mostly north of the Clyde-Forth line. These stones are the most visible remaining evidence of the Picts and are thought to date from the 6th to 9th centuries, a period during which the Picts became Christianized...
, along with some later carvings, dating between the 8th and 10th centuries, many of them superbly carved (Historic Scotland
Historic Scotland
Historic Scotland is an executive agency of the Scottish Government, responsible for historic monuments in Scotland.-Role:As its website states:...
; open April-end September, entrance charge). This collection is one of the finest of its type in Western Europe. The village was probably the site of an important Early Medieval Pictish
Picts
The Picts were a group of Late Iron Age and Early Mediaeval people living in what is now eastern and northern Scotland. There is an association with the distribution of brochs, place names beginning 'Pit-', for instance Pitlochry, and Pictish stones. They are recorded from before the Roman conquest...
monastery
Monastery
Monastery denotes the building, or complex of buildings, that houses a room reserved for prayer as well as the domestic quarters and workplace of monastics, whether monks or nuns, and whether living in community or alone .Monasteries may vary greatly in size – a small dwelling accommodating only...
, centred on the present church and churchyard.

Nearby Belmont Castle, constructed from the 15th century, originally as a residence of the Bishops of Dunkeld
Dunkeld
Dunkeld is a small town in Strathtay, Perth and Kinross, Scotland. It is about 15 miles north of Perth on the eastern side of the A9 road into the Scottish Highlands and on the opposite side of the Tay from the Victorian village of Birnam. Dunkeld and Birnam share a railway station, on the...
, was the residence of Sir Henry Campbell-Bannerman
Henry Campbell-Bannerman
Sir Henry Campbell-Bannerman GCB was a British Liberal Party politician who served as Prime Minister of the United Kingdom from 1905 to 1908 and Leader of the Liberal Party from 1899 to 1908. He also served as Secretary of State for War twice, in the Cabinets of Gladstone and Rosebery...
(1836-1908), Prime Minister of the United Kingdom
Prime Minister of the United Kingdom
The Prime Minister of the United Kingdom of Great Britain and Northern Ireland is the Head of Her Majesty's Government in the United Kingdom. The Prime Minister and Cabinet are collectively accountable for their policies and actions to the Sovereign, to Parliament, to their political party and...
1905-08. He is buried in the village churchyard. Meigle is also home to Meigle C.C.
Meigle C.C.
Meigle C.C. is a cricket club from Meigle, Perthshire, Scotland.Established in 1876, it has won the Strathmore & Perthshire Cricket Union, of which it was a founder member in 1929, on five occasions 2001, 1998, 1980, 1961 and 1954. The club was second to Brechin in the inaugural season...
a cricket
Cricket
Cricket is a bat-and-ball game played between two teams of 11 players on an oval-shaped field, at the centre of which is a rectangular 22-yard long pitch. One team bats, trying to score as many runs as possible while the other team bowls and fields, trying to dismiss the batsmen and thus limit the...
team which competes in the Strathmore Union
Strathmore Union
The Strathmore Union was the main cricket league for clubs in the north and midlands of Scotland outside of the Scottish Counties Cricket Championship until the late 1990s. It is now one of four district feeder leagues to the Scottish National Cricket League. It allowed the Perthshire League to...
.