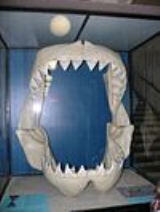 Overview
The megalodon is an extinct
Extinction
In biology and ecology, extinction is the end of an organism or of a group of organisms , normally a species. The moment of extinction is generally considered to be the death of the last individual of the species, although the capacity to breed and recover may have been lost before this point...
species
Species
In biology, a species is one of the basic units of biological classification and a taxonomic rank. A species is often defined as a group of organisms capable of interbreeding and producing fertile offspring. While in many cases this definition is adequate, more precise or differing measures are...
of shark
Shark
Sharks are a type of fish with a full cartilaginous skeleton and a highly streamlined body. The earliest known sharks date from more than 420 million years ago....
that lived roughly from 28 to 1.5 million years ago, during the Cenozoic
Cenozoic
The Cenozoic era is the current and most recent of the three Phanerozoic geological eras and covers the period from 65.5 mya to the present. The era began in the wake of the Cretaceous–Tertiary extinction event at the end of the Cretaceous that saw the demise of the last non-avian dinosaurs and...
Era
Era
An era is a commonly used word for long period of time. When used in science, for example geology, eras denote clearly defined periods of time of arbitrary but well defined length, such as for example the Mesozoic era from 252 Ma–66 Ma, delimited by a start event and an end event. When used in...
(late Oligocene
Oligocene
The Oligocene is a geologic epoch of the Paleogene Period and extends from about 34 million to 23 million years before the present . As with other older geologic periods, the rock beds that define the period are well identified but the exact dates of the start and end of the period are slightly...
to early Pleistocene
Pleistocene
The Pleistocene is the epoch from 2,588,000 to 11,700 years BP that spans the world's recent period of repeated glaciations. The name pleistocene is derived from the Greek and ....
).

The taxonomic assignment
Taxonomy
Taxonomy is the science of identifying and naming species, and arranging them into a classification. The field of taxonomy, sometimes referred to as "biological taxonomy", revolves around the description and use of taxonomic units, known as taxa...
of C. megalodon has been debated for nearly a century, and is still under dispute with two major interpretations; Carcharodon megalodon (under family Lamnidae
Lamnidae
Lamnidae is a family of sharks, commonly known as mackerel sharks or white sharks. They are large, fast-swimming sharks, found in oceans worldwide....
) or Carcharocles megalodon (under family Otodontidae
Otodontidae
Otodontidae is an extinct family of sharks, belonging to the order Lamniformes....
). Consequently, the scientific name
Binomial nomenclature
Binomial nomenclature is a formal system of naming species of living things by giving each a name composed of two parts, both of which use Latin grammatical forms, although they can be based on words from other languages...
of this species has been commonly abbreviated to C.

Is there a market for Megalodon teeth? A freind of mine found one. I`m researching for him.

Could the giant squid kill some of the megalodon.

If any possible way, could the megalodon still exist in the far depths of the oceon
More

I found, what I've beem told to be, a vertebra from a megalodon. Was wondering if anyone had suggestions on how I can go about getting authenticated? ...
More
x