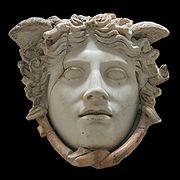 The over-lifesize Medusa Rondanini, the best late Hellenistic or Augustan
Augustus
Augustus ;23 September 63 BC – 19 August AD 14) is considered the first emperor of the Roman Empire, which he ruled alone from 27 BC until his death in 14 AD.The dates of his rule are contemporary dates; Augustus lived under two calendars, the Roman Republican until 45 BC, and the Julian...
Roman marble copy of the head of Medusa
Medusa
In Greek mythology Medusa , " guardian, protectress") was a Gorgon, a chthonic monster, and a daughter of Phorcys and Ceto. The author Hyginus, interposes a generation and gives Medusa another chthonic pair as parents. Gazing directly upon her would turn onlookers to stone...
, is rendered more humanized and beautiful than the always grotesque apotropaic head of Medusa that appeared as the Gorgoneion
Gorgoneion
In Ancient Greece, the Gorgoneion was originally a horror-creating apotropaic pendant showing the Gorgon's head. It was assimilated by the Olympian deities Zeus and Athena: both are said to have worn it as a protective pendant...
on the aegis
Aegis
An aegis is a large collar or cape worn in ancient times to display the protection provided by a high religious authority or the holder of a protective shield signifying the same, such as a bag-like garment that contained a shield. Sometimes the garment and the shield are merged, with a small...
of Athena
Athena
In Greek mythology, Athena, Athenê, or Athene , also referred to as Pallas Athena/Athene , is the goddess of wisdom, courage, inspiration, civilization, warfare, strength, strategy, the arts, crafts, justice, and skill. Minerva, Athena's Roman incarnation, embodies similar attributes. Athena is...
. The Medusa Rondanini is located in the Glyptothek
Glyptothek
The Glyptothek is a museum in Munich, Germany, which was commissioned by the Bavarian King Ludwig I to house his collection of Greek and Roman sculptures . It was designed by Leo von Klenze in the Neoclassical style, and built from 1816 to 1830...
in Munich, Germany, having been purchased by the art-loving king Ludwig of Bavaria
Ludwig I of Bavaria
Ludwig I was a German king of Bavaria from 1825 until the 1848 revolutions in the German states.-Crown prince:...
from the heirs of the marchese Rondanini, during his Grand Tour
Grand Tour
The Grand Tour was the traditional trip of Europe undertaken by mainly upper-class European young men of means. The custom flourished from about 1660 until the advent of large-scale rail transit in the 1840s, and was associated with a standard itinerary. It served as an educational rite of passage...
of Italy as a prince. 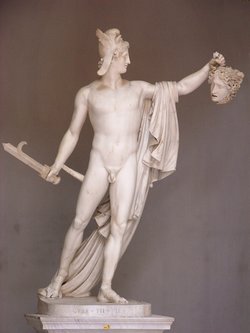 The Medusa Rondanini was formerly exhibited in Palazzo Rondanini in the upper end of via del Corso
Via del Corso
The Via del Corso , commonly known as the Corso, is a main street in the historical centre of Rome. It is remarkable for being absolutely straight in an area characterized by narrow meandering alleys and small piazzas...
, Rome
Rome
Rome is the capital of Italy and the country's largest and most populated city and comune, with over 2.7 million residents in . The city is located in the central-western portion of the Italian Peninsula, on the Tiber River within the Lazio region of Italy.Rome's history spans two and a half...
, where it was overlooked by the great art historian Johann Joachim Winckelmann
Johann Joachim Winckelmann
Johann Joachim Winckelmann was a German art historian and archaeologist. He was a pioneering Hellenist who first articulated the difference between Greek, Greco-Roman and Roman art...
, perhaps distracted by Michelangelo
Michelangelo
Michelangelo di Lodovico Buonarroti Simoni , commonly known as Michelangelo, was an Italian Renaissance painter, sculptor, architect, poet, and engineer who exerted an unparalleled influence on the development of Western art...
's Rondanini Pietà
Rondanini Pietà
The Rondanini Pietà is a marble sculpture that Michelangelo worked on from the 1550s until the last days of his life, in 1564. It is housed in the Castello Sforzesco in Milan. His final sculpture, the Rondanini Pietà revisited the theme of the Virgin Mary mourning over the body of the dead Christ,...
in the same collection. It was much admired, nevertheless, by Goethe, who was struck by its "unspeakable anguished stare of death" and said of it, when first bringing it to the attention of art historians in 1786, that "the mere knowledge that such a work could be created and still exists in the world makes me twice the person I was." When Antonio Canova
Antonio Canova
Antonio Canova was an Italian sculptor from the Republic of Venice who became famous for his marble sculptures that delicately rendered nude flesh...
made a marble Perseus with the Head of Medusa (1798-1801), to take the place of the Apollo Belvedere
Apollo Belvedere
The Apollo Belvedere or Apollo of the Belvedere—also called the Pythian Apollo— is a celebrated marble sculpture from Classical Antiquity. It was rediscovered in central Italy in the late 15th century, during the Renaissance...
sent to Napoleonic Paris, it was the Medusa Rondanini that served as the model for the gorgon's head in Perseus' outstretched hand.

The Medusa Rondanini may be a Roman copy of a classical work of the fifth century BC, a model attributed to one or another Athenian sculptor of the age of Phidias
Phidias
Phidias or the great Pheidias , was a Greek sculptor, painter and architect, who lived in the 5th century BC, and is commonly regarded as one of the greatest of all sculptors of Classical Greece: Phidias' Statue of Zeus at Olympia was one of the Seven Wonders of the Ancient World...
. Alternatively, it may have been modeled after a classicising Hellenistic work of the late fourth century BC. If it is of the fifth century, Janer Danforth Belson has pointed out, it is the first of the "beautiful gorgoneion" type to appear in Greek art by more than a century, and unparalleled in any contemporaneous representation of the Medusa head. Martin Robertson
Martin Robertson
Charles Martin Robertson was a British scholar of classical art and archaeology and poet. He was the elder son of Donald Struan Robertson and Petica Coursolles, née Jones , who hosted a literary salon. Martin Robertson, as he was always known, attended the Leys School and Trinity College Cambridge...
, following Furtwängler's attribution to Phidias, remarked that it would be unlikely for the beautiful face of the Medusa to be juxtaposed with the beautiful face of the goddess, whose gorgoneion retained its fearful archaic appearance.

Janer Danforth Belson has made a case for its model to have been the gorgoneion on a gilt-bronze aegis that was an ex-voto
Ex-voto
An ex-voto is a votive offering to a saint or divinity. It is given in fulfillment of a vow or in gratitude or devotion...
of Antiochus IV and was hung on the south retaining wall of the Acropolis
Acropolis
Acropolis means "high city" in Greek, literally city on the extremity and is usually translated into English as Citadel . For purposes of defense, early people naturally chose elevated ground to build a new settlement, frequently a hill with precipitous sides...
of Athens about 170 BC, where it was noted by Pausanias
Pausanias (geographer)
Pausanias was a Greek traveler and geographer of the 2nd century AD, who lived in the times of Hadrian, Antoninus Pius and Marcus Aurelius. He is famous for his Description of Greece , a lengthy work that describes ancient Greece from firsthand observations, and is a crucial link between classical...
in the late second century AD.

Six other ancient replicas of the same prototype, apparently a bronze, have been recorded, none of them of this quality.
The source of this article is wikipedia, the free encyclopedia.  The text of this article is licensed under the GFDL.