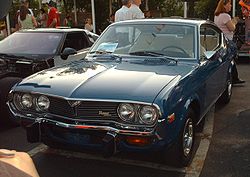 The RX-4 was initially available as a hardtop
Hardtop
A hardtop is a term for a rigid, rather than canvas, automobile roof. It has been used in several contexts: detachable hardtops, retractable hardtop roofs, and the so-called pillarless hardtop body style....
coupé
Coupé
A coupé or coupe is a closed car body style , the precise definition of which varies from manufacturer to manufacturer, and over time...
and sedan, with a station wagon
Station wagon
A station wagon is a body style variant of a sedan/saloon with its roof extended rearward over a shared passenger/cargo volume with access at the back via a third or fifth door , instead of a trunk lid...
launched in 1973 to replace the Savanna Wagon
Mazda Savanna
Mazda used the Savanna name on a number of rotary-powered sports cars in the Japan market.-1971:...
. Under the hood at first was a 130 hp 12A engine, but this was replaced by the larger 13B in 1974 producing 125 hp, for export. This engine was Mazda's new "AP" (for "anti-pollution") version, with much-improved emissions and fuel economy, but somewhat worse cold-starting behavior.

In South Africa it was produced until 1979, all years only with the 12A engine.

The car used an strut-type
MacPherson strut
The MacPherson strut is a type of car suspension system which uses the axis of a telescopic damper as the upper steering pivot. It is widely used in modern vehicles and named after Earle S. MacPherson, who developed the design.-History:...
independent suspension
Independent suspension
Independent suspension is a broad term for any automobile suspension system that allows each wheel on the same axle to move vertically independently of each other. This is contrasted with a beam axle, live axle or deDion axle system in which the wheels are linked – movement on one side affects...
in front with a live axle
Live axle
A live axle, sometimes called a solid axle, is a type of beam axle suspension system that uses the driveshafts that transmit power to the wheels to connect the wheels laterally so that they move together as a unit....
in the rear. Brakes were discs in front and drums in the rear. Curb weight
Curb weight
Curb weight or kerb weight is the total weight of a vehicle with standard equipment, all necessary operating consumables , a full tank of fuel, while not loaded with either passengers or cargo.This definition may differ from definitions used by governmental regulatory agencies or other...
was low at 2620 lb (1,188 kg) and the wheelbase fairly short at 99 in (2510 mm).

For the United States market, the RX-4 was sold from 1974 through 1978, when the RX-7
Mazda RX-7
Series 1 is commonly referred to as the "SA22C" from the first alphanumerics of the vehicle identification number. This series of RX-7 had exposed steel bumpers and a high-mounted indentation-located license plate, called by Werner Buhrer of Road & Track magazine a "Baroque depression."In 1980...
debuted. The 13B produced 110 hp and 117 lbft in United States emissions form. Base pricing was $4295, with the automatic transmission ($270) and air conditioning ($395) the only expensive options.

Road & Track
Road & Track
Road & Track is an American automotive enthusiast magazine. It is owned by Hearst Magazines, and is published monthly. The editorial offices are located in Newport Beach, California.-History:...
magazine was impressed, noting the car's improved fuel economy and price compared to the RX-3. This was notable, as the Wankel engine had suffered by the mid 1970s with a reputation as a gas-guzzler. Performance was good in a 1974 comparison test of six wagons, with an 11.7 s sprint to 60 mi/h and an 18 s/77.5 mph quarter-mile. The magazine noted that the wagon's brakes suffered from the extra 300 lb (136 kg) weight compared to the coupé.

The RX-4 was on Road & Track
Road & Track
Road & Track is an American automotive enthusiast magazine. It is owned by Hearst Magazines, and is published monthly. The editorial offices are located in Newport Beach, California.-History:...
magazine's Ten Best list for "Best Sports Sedan, $3500-6500" in 1975.