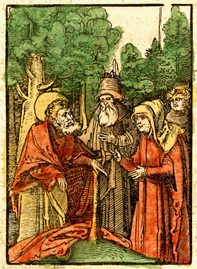 Matthew 3:5 is the fifth verse of the third chapter of the Gospel of Matthew
Gospel of Matthew
The Gospel According to Matthew is one of the four canonical gospels, one of the three synoptic gospels, and the first book of the New Testament. It tells of the life, ministry, death, and resurrection of Jesus of Nazareth...
in the New Testament
New Testament
The New Testament is the second major division of the Christian biblical canon, the first such division being the much longer Old Testament....
. The verse occurs in the section introducing John the Baptist
John the Baptist
John the Baptist was an itinerant preacher and a major religious figure mentioned in the Canonical gospels. He is described in the Gospel of Luke as a relative of Jesus, who led a movement of baptism at the Jordan River...
with this verse describing his popularity in the region.

In the King James Version of the Bible the text reads:

Then people from Jerusalem,
all of Judea, and all the region
around the Jordan went out to him.

Then people from Jerusalem,
all of Judea, and all the region
around the Jordan went out to him.

For a collection of other versions see BibRef Matthew 3:5

This verse describes Jews coming from Jerusalem all of Judea
Judea
Judea or Judæa was the name of the mountainous southern part of the historic Land of Israel from the 8th century BCE to the 2nd century CE, when Roman Judea was renamed Syria Palaestina following the Jewish Bar Kokhba revolt.-Etymology:The...
and the areas around the Jordan River to hear John the Baptist preach. It is a slight rewording of Mark 1:5. While Matthew 3:1
Matthew 3:1
Matthew 3:1 is the first verse of the third chapter of the Gospel of Matthew in the New Testament. This verse takes up the narrative some thirty years after Matthew 2:23 beginning the description of Jesus' ministry...
placed John in the wilderness, he was only about 20 miles from Jerusalem and it would have been very possible for pilgrism to make the journey. This description is considered historically credible as it is backed up by Josephus
Josephus
Titus Flavius Josephus , also called Joseph ben Matityahu , was a 1st-century Romano-Jewish historian and hagiographer of priestly and royal ancestry who recorded Jewish history, with special emphasis on the 1st century AD and the First Jewish–Roman War, which resulted in the Destruction of...
. In his Antiquities of the Jews
Antiquities of the Jews
Antiquities of the Jews is a twenty volume historiographical work composed by the Jewish historian Flavius Josephus in the thirteenth year of the reign of Roman emperor Flavius Domitian which was around 93 or 94 AD. Antiquities of the Jews contains an account of history of the Jewish people,...
he says of John the Baptist that the "others came in crowds about him, for they were very greatly moved by hearing his words" http://www.religiousstudies.uncc.edu/jdtabor/john.html. In fact at the time Josephus was writing, around 97 AD, John the Baptist seems to still be a far better known figure than Jesus, to whom Josephus only makes two much disputed references
Josephus on Jesus
This article is part of the Jesus and history series of articles.Josephus was a renowned 1st-century Jewish historian...
.
The source of this article is wikipedia, the free encyclopedia.  The text of this article is licensed under the GFDL.