Encyclopedia
Mattathias ben Johanan (died 165 BC) was a Jewish priest
Kohen
A Kohen is the Hebrew word for priest. Jewish Kohens are traditionally believed and halachically required to be of direct patrilineal descent from the Biblical Aaron....
whose role in the Jewish revolt against the Syrian Greeks
Seleucid Empire
The Seleucid Empire was a Greek-Macedonian state that was created out of the eastern conquests of Alexander the Great. At the height of its power, it included central Anatolia, the Levant, Mesopotamia, Persia, today's Turkmenistan, Pamir and parts of Pakistan.The Seleucid Empire was a major centre...
is related in the Books of the Maccabees
Books of the Maccabees
The Books of the Maccabees are books concerned with the Maccabees, the leaders of the Jewish rebellion against the Seleucid dynasty, or related subjects.The term mostly refers to two deuterocanonical books contained in some canons of the Bible:...
. Mattathias is accorded a central role in the story of Hanukkah
Hanukkah
Hanukkah , also known as the Festival of Lights, is an eight-day Jewish holiday commemorating the rededication of the Holy Temple in Jerusalem at the time of the Maccabean Revolt of the 2nd century BCE...
and, as a result, is named in the Al Hanissim prayer Jews add to Grace after meals
Birkat Hamazon
Birkat Hamazon or Birkath Hammazon, , known in English as the Grace After Meals, , is a set of Hebrew blessings that Jewish Law prescribes following a meal that includes bread or matzoh made from one or all of wheat, barley, rye, oats, spelt...
and the Amidah
Amidah
The Amidah , also called the Shmoneh Esreh , is the central prayer of the Jewish liturgy. This prayer, among others, is found in the siddur, the traditional Jewish prayer book...
during the festival's eight days.

The father of Judah and the other Maccabee leaders
Maccabees
The Maccabees were a Jewish rebel army who took control of Judea, which had been a client state of the Seleucid Empire. They founded the Hasmonean dynasty, which ruled from 164 BCE to 63 BCE, reasserting the Jewish religion, expanding the boundaries of the Land of Israel and reducing the influence...
, Mattathias was from a rural priestly family from Modi'in. Like all fit priests, he served in the Temple in Jerusalem. He was a son of Yohannan, grandson of Simeon, the Hasmonean, and great-grandson of Asmon or Hasmonaeus, a Levite
Levite
In Jewish tradition, a Levite is a member of the Hebrew tribe of Levi. When Joshua led the Israelites into the land of Canaan, the Levites were the only Israelite tribe that received cities but were not allowed to be landowners "because the Lord the God of Israel himself is their inheritance"...
of the lineage of Joarib for being the 5th grandson of Idaiah, son of Joarib and grandson of Jachin, in turn a descendant of Phinehas
Phinehas
-Biblical figures:*Phinehas, son of Eleazar and grandson of Aaron the High Priest*Phinehas, son of the High Priest Eli. He was a priest at Shiloh, and died when the Philistines captured the Ark of the Covenant-Other :*Pinchas, the 41st weekly Torah portion....
, 3rd High Priest of Israel, according to Mattathias' own words in I Maccabees.

After the Seleucid persecutions began, Mattathias returned to Modi'in. In 167 BC, when asked by a Seleucid Greek
Seleucid Empire
The Seleucid Empire was a Greek-Macedonian state that was created out of the eastern conquests of Alexander the Great. At the height of its power, it included central Anatolia, the Levant, Mesopotamia, Persia, today's Turkmenistan, Pamir and parts of Pakistan.The Seleucid Empire was a major centre...
government representative under King Antiochus IV to offer sacrifice to the Greek gods, he not only refused to do so, but slew with his own hand the Jew who had stepped forward to do so. He then attacked the government official that required the act.
Upon the edict for his arrest, he took refuge in the wilderness of Judea
Judea
Judea or Judæa was the name of the mountainous southern part of the historic Land of Israel from the 8th century BCE to the 2nd century CE, when Roman Judea was renamed Syria Palaestina following the Jewish Bar Kokhba revolt.-Etymology:The...
with his five sons, and called upon all Jews to follow him. Many eventually responded to his call. 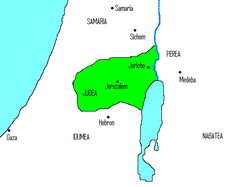 This was the first step in the war of the Maccabees against the Seleucid Greeks, the result of which was Jewish independence, which had not been enjoyed for 400 years. The events of the war of the Maccabees form the basis for the holiday of Hanukkah
Hanukkah
Hanukkah , also known as the Festival of Lights, is an eight-day Jewish holiday commemorating the rededication of the Holy Temple in Jerusalem at the time of the Maccabean Revolt of the 2nd century BCE...
, which is celebrated by Jews on the 25th of Kislev
Kislev
Kislev Kislev Tiberian ; also Chislev is the third month of the civil year and the ninth month of the ecclesiastical year on the Hebrew calendar....
(on the Hebrew calendar
Hebrew calendar
The Hebrew calendar , or Jewish calendar, is a lunisolar calendar used today predominantly for Jewish religious observances. It determines the dates for Jewish holidays and the appropriate public reading of Torah portions, yahrzeits , and daily Psalm reading, among many ceremonial uses...
, corresponding to Mid-November to Late-December on the Gregorian Calendar
Gregorian calendar
The Gregorian calendar, also known as the Western calendar, or Christian calendar, is the internationally accepted civil calendar. It was introduced by Pope Gregory XIII, after whom the calendar was named, by a decree signed on 24 February 1582, a papal bull known by its opening words Inter...
).


In literature and liturgy

The story of the Maccabees can be found in the deuterocanonical books
Deuterocanonical books
Deuterocanonical books is a term used since the sixteenth century in the Catholic Church and Eastern Christianity to describe certain books and passages of the Christian Old Testament that are not part of the Hebrew Bible. The term is used in contrast to the protocanonical books, which are...
of 1 Maccabees
1 Maccabees
The First book of Maccabees is a book written in Hebrew by a Jewish author after the restoration of an independent Jewish kingdom, about the latter part of the 2nd century BC. The original Hebrew is lost and the most important surviving version is the Greek translation contained in the Septuagint...
and 2 Maccabees
2 Maccabees
2 Maccabees is a deuterocanonical book of the Bible, which focuses on the Jews' revolt against Antiochus IV Epiphanes and concludes with the defeat of the Syrian general Nicanor in 161 BC by Judas Maccabeus, the hero of the work....
, in Josephus
Josephus
Titus Flavius Josephus , also called Joseph ben Matityahu , was a 1st-century Romano-Jewish historian and hagiographer of priestly and royal ancestry who recorded Jewish history, with special emphasis on the 1st century AD and the First Jewish–Roman War, which resulted in the Destruction of...
, and in Talmud
Talmud
The Talmud is a central text of mainstream Judaism. It takes the form of a record of rabbinic discussions pertaining to Jewish law, ethics, philosophy, customs and history....
ic references (Shabbat 21b, Shabbat 23a - related to the candles).

The "Al Hanisim" prayer, added into the Amidah
Amidah
The Amidah , also called the Shmoneh Esreh , is the central prayer of the Jewish liturgy. This prayer, among others, is found in the siddur, the traditional Jewish prayer book...
and Grace after meals on Chanukah, refers to the story of the Maccabees and to Mattathias by name.

Two persons named "Mattathias," one apparently from around the same time as this Mattathias, appears in the Gospel of Luke
Gospel of Luke
The Gospel According to Luke , commonly shortened to the Gospel of Luke or simply Luke, is the third and longest of the four canonical Gospels. This synoptic gospel is an account of the life and ministry of Jesus of Nazareth. It details his story from the events of his birth to his Ascension.The...
's account of the genealogy of Jesus
Genealogy of Jesus
The genealogy of Jesus is described in two passages of the Gospels: Luke 3:23–38 and Matthew 1:1–17.* Matthew's genealogy commences with Abraham and then from King David's son Solomon follows the legal line of the kings through Jeconiah, the king whose descendants were cursed, to Joseph, legal...
. However, the son of Luke's Mattathias was named Joseph, and the historical Mattathias never had any known son by that name.