Matei Basarab was a Wallachia
Wallachia
Wallachia or Walachia is a historical and geographical region of Romania. It is situated north of the Danube and south of the Southern Carpathians...
n Voivode (Prince) between 1632 and 1654.

Much of Matei's reign was spent fighting off incursions from Moldavia
Moldavia
Moldavia is a geographic and historical region and former principality in Eastern Europe, corresponding to the territory between the Eastern Carpathians and the Dniester river...
, which he successfully accomplished in 1637, 1639, and 1653 - see Battle of Finta
Battle of Finta
The Battle of Finta was a confrontation between Matei Basarab's Wallachian army and a combined Moldo-Cossack force under Vasile Lupu and Tymofiy Khmelnytsky...
. He was an enlightened ruler, and is noted for introducing the printing press
Printing press
A printing press is a device for applying pressure to an inked surface resting upon a print medium , thereby transferring the ink...
to Wallachia (1634) and creating the first Wallachian code of laws as well as patronizing art and religion (founder of the first upper school in his Principality). He built more than 45 churches and monasteries, being compared to Stephen the Great, the famous ruler of Moldavia.

His election in 1632 signified the first official exception to a rule set by custom
Custom (law)
Custom in law is the established pattern of behavior that can be objectively verified within a particular social setting. A claim can be carried out in defense of "what has always been done and accepted by law." Customary law exists where:...
. Basarab was merely a boyar
Boyar
A boyar, or bolyar , was a member of the highest rank of the feudal Moscovian, Kievan Rus'ian, Bulgarian, Wallachian, and Moldavian aristocracies, second only to the ruling princes , from the 10th century through the 17th century....
(of the Craioveşti
Craiovesti
The Craiovești , later Brâncovenești , were a boyar family in Wallachia who gave the country several of its Princes and held the title of Ban of Oltenia for ca...
family) and one not related to previous Princes (although it seems that a similar point can be made about such rulers as Michael the Brave). The reason for this choice has been explained as a reaction of indigenous boyars against competition from newly infiltrated Greeks and Levant
Levant
The Levant or ) is the geographic region and culture zone of the "eastern Mediterranean littoral between Anatolia and Egypt" . The Levant includes most of modern Lebanon, Syria, Jordan, Israel, the Palestinian territories, and sometimes parts of Turkey and Iraq, and corresponds roughly to the...
ines. It may also be because of these special circumstances that Matei used the surname "Basarab" - associated as it is with a fabricated legitimate lineage. 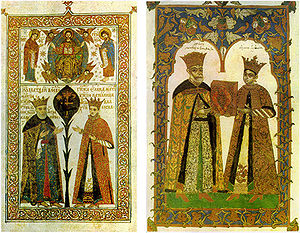 Matei Basarab's rule also coincides with the last stage in the decay of the lesser nobility, the result of political pressure from boyars and drastic economical changes (the revolt of the seimeni
Seimeni
Seimeni designates the group of flintlock-armed infantry mercenaries charged with guarding the hospodar and his Court in 17th and 18th century Wallachia and Moldavia. They were mostly of Serb and other Balkan origin....
military under Constantin Şerban
Constantin Serban
Constantin Şerban was Prince of Wallachia between 1654 and 1658, illegitimate son to Radu Şerban .-Reign:...
probably has this as its main cause).

It seems that the Prince was planning emancipation from Ottoman
Ottoman Empire
The Ottoman EmpireIt was usually referred to as the "Ottoman Empire", the "Turkish Empire", the "Ottoman Caliphate" or more commonly "Turkey" by its contemporaries...
rule, as well as domination over Moldavia. He maintained a close relationship with the Transylvania
Transylvania
Transylvania is a historical region in the central part of Romania. Bounded on the east and south by the Carpathian mountain range, historical Transylvania extended in the west to the Apuseni Mountains; however, the term sometimes encompasses not only Transylvania proper, but also the historical...
n ruler George II Rákóczi
George II Rákóczi
György Rákóczi II , a Transylvanian Hungarian ruler, was the eldest son of George I and Susanna Lorantffy....
, an ambitious, stronger, and more autonomous subject of the Turks.

Matei Basarab and his contemporary, the Moldavian Prince Vasile Lupu
Vasile Lupu
Vasile Lupu was a Moldavian Voivode between 1634 and 1653. Vasile Coci surnamed "the wolf" who ruled as Prince of Moldavia had secured the Moldavian throne in 1634 after a series of complicated intrigues and managed to hold it for twenty years. Vasile was of Albanian origin and Greek education...
are credited with introducing the first written laws of the two Principalities. However, these two virtually identical sets of laws do not go against tradition, being merely the Romanian translation of Byzantine
Byzantine Empire
The Byzantine Empire was the Eastern Roman Empire during the periods of Late Antiquity and the Middle Ages, centred on the capital of Constantinople. Known simply as the Roman Empire or Romania to its inhabitants and neighbours, the Empire was the direct continuation of the Ancient Roman State...
customs
Custom (law)
Custom in law is the established pattern of behavior that can be objectively verified within a particular social setting. A claim can be carried out in defense of "what has always been done and accepted by law." Customary law exists where:...
(pravile), alluded to in documents of the previous decades. The two collections under Matei Basarab are Pravila de la Govora ("The Govora
Baile Govora
Băile Govora is a Romanian spa town in Vâlcea County, about south-west of Râmnicu Vâlcea and west of the Olt river. Notable features of the town include the Govora abbey and the nearby "Dintr-un...
Code") in 1640 and Pravila lui Matei Basarab ("Matei Basarab's Code"; also known as Îndreptarea Legii - "The Re-shaping of Laws") in 1652.
The source of this article is wikipedia, the free encyclopedia.  The text of this article is licensed under the GFDL.