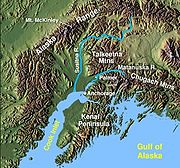 The Matanuska River is a river, approximately 75 miles (120 km) long, in Southcentral Alaska
Alaska
Alaska is the largest state in the United States by area. It is situated in the northwest extremity of the North American continent, with Canada to the east, the Arctic Ocean to the north, and the Pacific Ocean to the west and south, with Russia further west across the Bering Strait...
, United States
United States
The United States of America is a federal constitutional republic comprising fifty states and a federal district...
. It drains a broad valley south of the Alaska Range
Alaska Range
The Alaska Range is a relatively narrow, 650-km-long mountain range in the southcentral region of the U.S. state of Alaska, from Lake Clark at its southwest end to the White River in Canada's Yukon Territory in the southeast...
known as the Matanuska-Susitna Valley
Matanuska-Susitna Valley
Matanuska-Susitna Valley is an area in Southcentral Alaska south of the Alaska Range about 35 miles north of Anchorage, Alaska....
.

Its headwaters are at Matanuska Glacier
Matanuska Glacier
Matanuska Glacier is a valley glacier in the US state of Alaska. At long by wide, it is the largest glacier accessible by car in the United States. Its terminus is the source of the Matanuska River. It lies near the Glenn Highway about northeast of Anchorage. Matanuska Glacier flows about per day...
in the northern Chugach Mountains
Chugach Mountains
The Chugach Mountains of southern Alaska are the northernmost of the several mountain ranges that make up the Pacific Coast Ranges of the western edge of North America. The range is about 500 km long, running generally east-west. Its highest point is Mount Marcus Baker, at , but most of its...
, approximately 100 miles (160 km) northeast of Anchorage
Anchorage, Alaska
Anchorage is a unified home rule municipality in the southcentral part of the U.S. state of Alaska. It is the northernmost major city in the United States...
. It flows generally west-southwest through the Mat-Su Valley, between the Chugach range to the south and the Talkeetna Mountains
Talkeetna Mountains
The Talkeetna Mountains are a mountain range in Alaska. The Matanuska and Susitna River valleys, with towns such as Trapper Creek, Talkeetna, Wasilla, Palmer, Sutton, and Chickaloon, roughly bound the Talkeetnas in the westerly parts of the range. Sovereign Mountain rises to 8849 feet in the...
to the north. It flows past Palmer
Palmer, Alaska
Palmer is the borough seat of the Matanuska-Susitna Borough in the state of Alaska, USA. It is part of the Anchorage Metropolitan Statistical Area. As of the 2010 census, the population of the city is 5,937....
and enters the Knik Arm of Cook Inlet
Cook Inlet
Cook Inlet stretches from the Gulf of Alaska to Anchorage in south-central Alaska. Cook Inlet branches into the Knik Arm and Turnagain Arm at its northern end, almost surrounding Anchorage....
from the northeast approximately 25 mi (40 km) northeast of Anchorage.

The Mat-Su Valley is one of the most settled regions of Alaska and one of the few areas in the state to support agriculture
Agriculture
Agriculture is the cultivation of animals, plants, fungi and other life forms for food, fiber, and other products used to sustain life. Agriculture was the key implement in the rise of sedentary human civilization, whereby farming of domesticated species created food surpluses that nurtured the...
. The river is a popular destination for whitewater rafting.