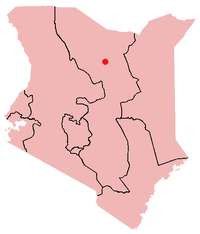 Marsabit is a town in northern Kenya
Kenya
Kenya , officially known as the Republic of Kenya, is a country in East Africa that lies on the equator, with the Indian Ocean to its south-east...
, located 170 km east of the center of the East African Rift
East African Rift
The East African Rift is an active continental rift zone in eastern Africa that appears to be a developing divergent tectonic plate boundary. It is part of the larger Great Rift Valley. The rift is a narrow zone in which the African Plate is in the process of splitting into two new tectonic plates...
at 37°58' E, 2°19' N (37.97°E, 2.32 N). It is located in the Eastern Province
Eastern Province (Kenya)
The Eastern Province of Kenya is one of seven regions of the country. Its northern boundary is with Ethiopia; the North Eastern Province and Coast Province lie to the east and south; and the remainder of Kenya's provinces, including Central Province, run along its western border. The provincial...
and is almost surrounded by the Marsabit National Park
Marsabit National Park
The Marsabit National Park is a national park and nature reserve located at Mount Marsabit in northern Kenya, near the town of Marsabit. It is located 560 km north of Nairobi in Marsabit District in Eastern Province and its reserve is noted for its zebra population and bird sanctuary.- Flora...
and Reserve. It serves as the capital of Marsabit District
Marsabit District
Marsabit District is an administrative district in the Eastern Province of Kenya. Its capital town is Marsabit. The district has a population of 121,478 The district is located in northern Kenya. It borders the eastern shore of Lake Turkana....
, and lies southeast of the Chalbi Desert
Chalbi Desert
The Chalbi Desert is a small desert in northern Kenya near the border with Ethiopia. The desert is located east of Lake Turkana, the largest permanent desert lake in the world. The settlement of North Horr lies in the desert. Marsabit is the closest major city....
in a forest
Forest
A forest, also referred to as a wood or the woods, is an area with a high density of trees. As with cities, depending where you are in the world, what is considered a forest may vary significantly in size and have various classification according to how and what of the forest is composed...
ed area known for its volcano
Volcano
2. Bedrock3. Conduit 4. Base5. Sill6. Dike7. Layers of ash emitted by the volcano8. Flank| 9. Layers of lava emitted by the volcano10. Throat11. Parasitic cone12. Lava flow13. Vent14. Crater15...
es and crater lake
Crater lake
A crater lake is a lake that forms in a volcanic crater or caldera, such as a maar; less commonly and with lower association to the term a lake may form in an impact crater caused by a meteorite. Sometimes lakes which form inside calderas are called caldera lakes, but often this distinction is not...
s.

The town of Marsabit is an outpost of urban civilization in the vast desert of northern Kenya. The town is situated on an isolated extinct volcano, Mount Marsabit
Mount Marsabit
Marsabit is a 6300 km² basaltic shield volcano in Kenya, located 170 km east of the center of the East African Rift, in Marsabit District near the town of Marsabit. This was primarily built during the Miocene, but some lava flows and explosive maar-forming eruptions have occurred more...
, which rises almost a kilometer above the desert. The hills here are heavily forested, in contrast to the desert beyond, with their own "insular" eco-system.

The town is inhabited by the Nilotic
Nilotic
Nilotic people or Nilotes, in its contemporary usage, refers to some ethnic groups mainly in South Sudan, Uganda, Kenya, and northern Tanzania, who speak Nilotic languages, a large sub-group of the Nilo-Saharan languages...
Samburu and Turkana
Turkana people
The Turkana are a Nilotic people native to the Turkana District in northwest Kenya, a dry and hot region bordering Lake Turkana in the east, Pokot, Rendille and Samburuto the south, Uganda to the west, and Sudan and Ethiopia to the north...
, as well as the Cushitic
Cushitic languages
The Cushitic languages are a branch of the Afroasiatic language family spoken in the Horn of Africa, Tanzania, Kenya, Sudan and Egypt. They are named after the Biblical character Cush, who was identified as an ancestor of the speakers of these specific languages as early as AD 947...
-speaking Gabbra, Burji, Borana and Rendille. It is also home to some Somali
Somali people
Somalis are an ethnic group located in the Horn of Africa, also known as the Somali Peninsula. The overwhelming majority of Somalis speak the Somali language, which is part of the Cushitic branch of the Afro-Asiatic language family...
and Ameru
Ameru
The Meru people, or Ameru, are a Bantu ethnic group who mainly inhabit the Meru region of Kenya. They speak Kimîîru language.The Meru people of Kenya should not be mistaken with the Meru of neighboring Tanzania, or Wameru.-Location:...
traders and migrants.

In addition, Marsabit has an airstrip and a mountain peak (Mount Marsabit), with "singing" wells
Water well
A water well is an excavation or structure created in the ground by digging, driving, boring or drilling to access groundwater in underground aquifers. The well water is drawn by an electric submersible pump, a trash pump, a vertical turbine pump, a handpump or a mechanical pump...
just outside the town. Elephants can also often be seen in the local wildlife refuge that surrounds the town, occasionally breaking down fences and causing damage to local farmers crop beds.

The town's name is from the Amharic
Amharic language
Amharic is a Semitic language spoken in Ethiopia. It is the second most-spoken Semitic language in the world, after Arabic, and the official working language of the Federal Democratic Republic of Ethiopia. Thus, it has official status and is used nationwide. Amharic is also the official or working...
word 'Marsa bet' (Meaning Marsa's home/house) is believed to have been named after a farmer named 'Marsa' (ethnically Burji) who was brought to Marsabit from Mega
Mega, Ethiopia
Mega is a town in southern Ethiopia. Located between Moyale and Yabelo on the paved highway south to Kenya, in the Borena Zone of the Oromia Region , this town has a latitude and longitude of with an elevation of 1740 meters above sea level...
(in Ethiopia) by the Consul to assist in consolidation of farming and permanent settlement on the slopes of Mount Marsabit.

Besides the aforementioned ethnic groups, there are other people from other parts of Kenya who are there working mostly for the government and business. About 40% of the people living in Marsabit are Christians, 32% Muslims and other 28% believe in traditional religions and others. Mostly, these groups have lived in peace, but starting in 1994 and lasting for almost a year, there were ethnic killings of Gabra by Borana, following a dispute over clan ownership of cattle—which are the main source of income for both groups, in addition to trade in goods and foodstuffs.

Marsabit is the announced location for a conference between Borana and Gabra elders scheduled for 2-6 June 2009. Discussions to resolve existing conflicts between the two groups have been underway for several years now, and agreements are expected to be sealed at the event at this conference in the presence of traditional leaders.

Marsabit is approximately 550 kilometers or two days' drive from Nairobi
Nairobi
Nairobi is the capital and largest city of Kenya. The city and its surrounding area also forms the Nairobi County. The name "Nairobi" comes from the Maasai phrase Enkare Nyirobi, which translates to "the place of cool waters". However, it is popularly known as the "Green City in the Sun" and is...
via the towns of Isiolo
Isiolo
Isiolo is a town in the Eastern Province, Kenya. It is situated in the Upper Eastern sub-region, and lies 285 kilometres north of Nairobi, the capital city of Kenya. The town grew around the local military camps, much of the population being descended from former Somali soldiers who had fought in...
and Archer's Post, by either hanging on top of the trucks or hiking lift in government vehicles a list in transport. There are two airstrips servicing charter aircraft one close to town about 10 minutes Drive towards Moyale (Marsabit Airstrip) and the second about 30 minutes away towards Chalbi. (Segel Airstrip)

Marsabit town is a trading and commercial center, with three petrol stations, a bank, post office, shops, restaurants, lodges and even a dry cleaner. The town facilitates the supply and movement of goods and services between Moyale
Moyale
Moyale is a market town on the border of Ethiopia and Kenya, which is split between the two countries: the larger portion is in Ethiopia , and the smaller is in Kenya . There are four disputed locations within the Moyale district between the Somali and Oromo regions...
(goods from Ethiopia
Ethiopia
Ethiopia , officially known as the Federal Democratic Republic of Ethiopia, is a country located in the Horn of Africa. It is the second-most populous nation in Africa, with over 82 million inhabitants, and the tenth-largest by area, occupying 1,100,000 km2...
) and Isiolo (goods from Nairobi). Agriculture also plays a role, as many grow millet
Millet
The millets are a group of small-seeded species of cereal crops or grains, widely grown around the world for food and fodder. They do not form a taxonomic group, but rather a functional or agronomic one. Their essential similarities are that they are small-seeded grasses grown in difficult...
and maize
Maize
Maize known in many English-speaking countries as corn or mielie/mealie, is a grain domesticated by indigenous peoples in Mesoamerica in prehistoric times. The leafy stalk produces ears which contain seeds called kernels. Though technically a grain, maize kernels are used in cooking as a vegetable...
to be consumed locally and nomad
Nomad
Nomadic people , commonly known as itinerants in modern-day contexts, are communities of people who move from one place to another, rather than settling permanently in one location. There are an estimated 30-40 million nomads in the world. Many cultures have traditionally been nomadic, but...
ic people supply beef by selling their cows.

Lake Paradise (which attracts game animals such as elephants and buffalo), and Bongole Crater located in the heart of the forest are both local attractions for tourists. The town and surrounding area are of rich cultural interest to anthropologists
Anthropology
Anthropology is the study of humanity. It has origins in the humanities, the natural sciences, and the social sciences. The term "anthropology" is from the Greek anthrōpos , "man", understood to mean mankind or humanity, and -logia , "discourse" or "study", and was first used in 1501 by German...
and other researchers.
The source of this article is wikipedia, the free encyclopedia.  The text of this article is licensed under the GFDL.