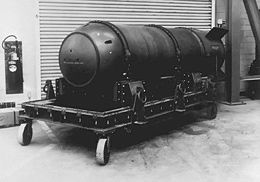 The Mark 15 is widely described as a transitional design between fission and thermonuclear weapons. The Mark 15 was a staged weapon (see Teller-Ulam design
Teller-Ulam design
The Teller–Ulam design is the nuclear weapon design concept used in most of the world's nuclear weapons. It is colloquially referred to as "the secret of the hydrogen bomb" because it employs hydrogen fusion, though in most applications the bulk of its destructive energy comes from uranium fission,...
), using radiation implosion from a fission nuclear primary (Cobra) to implode a secondary stage. Unlike most modern thermonuclear bombs, the Mark 15 used a secondary which was primarily HEU (highly enriched uranium
Enriched uranium
Enriched uranium is a kind of uranium in which the percent composition of uranium-235 has been increased through the process of isotope separation. Natural uranium is 99.284% 238U isotope, with 235U only constituting about 0.711% of its weight...
), which generated most of its energy from nuclear fission reactions once the primary imploded it. There was a thermonuclear core which underwent fusion reactions, but most of the energy came from the HEU fissioning. The HEU fission was enhanced by fusion stage neutrons, but would have generated a very significant fission yield by itself.

Some later bombs used depleted uranium fusion stage tampers, and neutrons from the fusion would fission some of the tamper, but the primary energy release (50% or more) was from the fusion reaction.

The HEU secondary tamper concept may have been used in the most modern nuclear weapons, where compact size and weight were highly valued, including the W88
W88
The W88 is a United States thermonuclear warhead, with an estimated yield of 475 kiloton , and is small enough to fit on MIRVed missiles. The W88 was designed at the Los Alamos National Laboratory in the 1970s. In 1999 the director of Los Alamos who had presided over its design described it as...
and W87 Mod 1 weapons.

The Mod 1 corresponds to the Castle Nectar
Operation Castle
Operation Castle was a United States series of high-energy nuclear tests by Joint Task Force SEVEN at Bikini Atoll beginning in March 1954...
test of the Zombie weapon prototype. This test had a yield of 1.69 megatons
TNT equivalent
TNT equivalent is a method of quantifying the energy released in explosions. The ton of TNT is a unit of energy equal to 4.184 gigajoules, which is approximately the amount of energy released in the detonation of one ton of TNT...
.

The Mod 2 corresponds to the Redwing Cherokee
Operation Redwing
Operation Redwing was a United States series of 17 nuclear test detonations from May to July 1956. They were conducted at Bikini and Enewetak atolls. The entire operation followed Operation Wigwam and preceded Operation Plumbbob. The primary intention was to test new, second-generation...
nuclear test of the TX-15-X1 test model, and had a yield of 3.8 megatons. Redwing Cherokee was the first US thermonuclear bomb airdrop test.

The Mod 3 also appears to have had a 3.8 megaton yield.

A missile warhead variant of the Mark 15, the W15 Warhead, was an ongoing project in the mid 1950s. It was canceled in early 1957. Before cancellation, it had been intended for use on the SM-62 Snark missile. Instead, the Snark ended up using the W39 (see below).

The W39
W39
The Mark 39 nuclear bomb and W39 nuclear warhead were versions of an American thermonuclear weapon, which were in service from 1957 to 1966....
nuclear warhead and B39 nuclear bomb used a common nuclear physics package which was derived from the Mark 15. The experimental W39 devices were initially tested as the TX-15-X3 (which is identical to the W39 Mod 0 design).

On 5 February 1958, during a training mission flown by a B-47, a Mk 15 nuclear bomb minus nuclear capsule was lost off the coast of Georgia
Georgia (U.S. state)
Georgia is a state located in the southeastern United States. It was established in 1732, the last of the original Thirteen Colonies. The state is named after King George II of Great Britain. Georgia was the fourth state to ratify the United States Constitution, on January 2, 1788...
near Savannah
Savannah, Georgia
Savannah is the largest city and the county seat of Chatham County, in the U.S. state of Georgia. Established in 1733, the city of Savannah was the colonial capital of the Province of Georgia and later the first state capital of Georgia. Today Savannah is an industrial center and an important...
. It remains missing despite an intensive search.