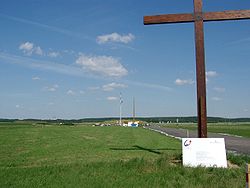 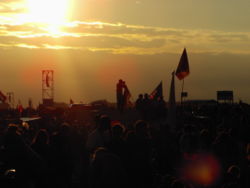 Marienfeld is a large grassy field on the reclaimed site of a former open-pit
Open-pit mining
Open-pit mining or opencast mining refers to a method of extracting rock or minerals from the earth by their removal from an open pit or borrow....
lignite
Lignite
Lignite, often referred to as brown coal, or Rosebud coal by Northern Pacific Railroad,is a soft brown fuel with characteristics that put it somewhere between coal and peat...
mine about 20 km (12.4 mi) south-west of Cologne Cathedral
Cologne Cathedral
Cologne Cathedral is a Roman Catholic church in Cologne, Germany. It is the seat of the Archbishop of Cologne and the administration of the Archdiocese of Cologne. It is renowned monument of German Catholicism and Gothic architecture and is a World Heritage Site...
in the city of Cologne
Cologne
Cologne is Germany's fourth-largest city , and is the largest city both in the Germany Federal State of North Rhine-Westphalia and within the Rhine-Ruhr Metropolitan Area, one of the major European metropolitan areas with more than ten million inhabitants.Cologne is located on both sides of the...
, Germany
Germany
Germany , officially the Federal Republic of Germany , is a federal parliamentary republic in Europe. The country consists of 16 states while the capital and largest city is Berlin. Germany covers an area of 357,021 km2 and has a largely temperate seasonal climate...
, straddling the towns of Frechen
Frechen
Frechen is a town in the Rhein-Erft-Kreis, in North Rhine-Westphalia, Germany. Frechen was first mentioned in 877. It is situated at the western Cologne city border....
and Kerpen
Kerpen
Kerpen is a town in the Rhein-Erft-Kreis, North Rhine-Westphalia. Germany. It is located about 30 kilometers southwest from Cologne.-Division of the town:...
. The mine area was named Marienfeld (German
German language
German is a West Germanic language, related to and classified alongside English and Dutch. With an estimated 90 – 98 million native speakers, German is one of the world's major languages and is the most widely-spoken first language in the European Union....
: Mary's Field) and landscaped in order to serve as the site of the Catholic Church's 20th World Youth Day
World Youth Day 2005
The 20th World Youth Day 2005 was a Catholic youth festival that started on August 16 and continued until August 21, 2005 in Cologne, Germany. It was the first World Youth Day and foreign trip of Pope Benedict XVI, who joined the festival on August 18. This meeting was decided by the previous...
in 2005.

Preparations for the World Youth Day began in September 2004. A 10-m (33-ft) Pope Hill (German: Papsthügel) was constructed since April 2005, so Pope Benedict XVI
Pope Benedict XVI
Benedict XVI is the 265th and current Pope, by virtue of his office of Bishop of Rome, the Sovereign of the Vatican City State and the leader of the Catholic Church as well as the other 22 sui iuris Eastern Catholic Churches in full communion with the Holy See...
could be visible amidst an estimated 1 to 2 million visitors when he presided over the festival's concluding Sunday Mass
Mass (liturgy)
"Mass" is one of the names by which the sacrament of the Eucharist is called in the Roman Catholic Church: others are "Eucharist", the "Lord's Supper", the "Breaking of Bread", the "Eucharistic assembly ", the "memorial of the Lord's Passion and Resurrection", the "Holy Sacrifice", the "Holy and...
on August 21, 2005. An altar was built at the top of the hill, which was christened the Mountain of the 70 Nations by Cardinal Meisner, because little pieces of earth were brought from church delegates of 70 different countries. The hill was built by Bilfinger Berger AG, which poured over 80,000 m3 (2.8 million cu. ft) of earth carried in around 200 trucks per day.

The name Marienfeld is derived from a Pietà
Pietà
The Pietà is a subject in Christian art depicting the Virgin Mary cradling the dead body of Jesus, most often found in sculpture. As such, it is a particular form of the Lamentation of Christ, a scene from the Passion of Christ found in cycles of the Life of Christ...
sculpted in 1420 from French limestone that has been a destination for pilgrims seeking to venerate the Virgin Mary for centuries. The sculpture has moved numerous times. It was first placed in a chapel at a location around 1 km from the present Marienfeld, then near the town of Grefrath
Grefrath
Grefrath is a municipality in the district of Viersen, in the western part of North Rhine-Westphalia, Germany....
. It was moved in 1730 by the nun
Nun
A nun is a woman who has taken vows committing her to live a spiritual life. She may be an ascetic who voluntarily chooses to leave mainstream society and live her life in prayer and contemplation in a monastery or convent...
s from the nearby convent
Convent
A convent is either a community of priests, religious brothers, religious sisters, or nuns, or the building used by the community, particularly in the Roman Catholic Church and in the Anglican Communion...
of Bottenbroich to the parish church of Bottenbroich, the Church of the Assumption of Mary
Assumption of Mary
According to the belief of Christians of the Roman Catholic Church, Eastern Orthodoxy, Oriental Orthodoxy, and parts of the Anglican Communion and Continuing Anglicanism, the Assumption of Mary was the bodily taking up of the Virgin Mary into Heaven at the end of her life...
(St. Maria Himmelfahrt), an old church (built between 1479 and 1484) located in part of what is now Marienfeld. In 1948, the church was demolished, partly due to heavy damage sustained during World War II
World War II
World War II, or the Second World War , was a global conflict lasting from 1939 to 1945, involving most of the world's nations—including all of the great powers—eventually forming two opposing military alliances: the Allies and the Axis...
and partly as part of the resettlement of the town of Bottenbroich to make way for an open-pit lignite mine being opened on the site. The parishes of Bottenbroich and Grefrath were combined, and the Pietà was moved to a new parish church in Grefrath, built in 1949. However, Grefrath itself was gradually resettled between 1952 and 1965 to make way for the expansion of the lignite mine, so the Pietà was moved again in 1963 to its present location at the parish church of Frechen-Grefrath (2 km from Marienfeld), where it remains on display.

The area used for the World Youth day celebrations should not be confused with the town of Marienfeld in the Gutersloh district of Germany, where the Portugal national football team stayed and used as a training area during the 2006 FIFA World Cup.