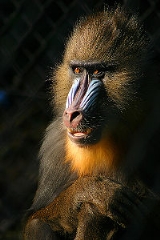 The mandrill is perhaps the most colorful primate. It has an olive green or dark grey pelage with yellow and black bands and a white belly. Its hairless face has an elongated muzzle with distinctive characteristics such as a red stripe down the middle and protruding blue ridges on the sides. It also has red nostrils and lips, a yellow beard and white tuffs. The areas around the genitals and the anus are multi-colored, being colored red, pink, blue, scarlet, and purple. They also have pale pink ischial callosities
Callosity
A callosity is another name for callus, a piece of skin that has become thickened as a result of repeated contact and friction.- Monkeys :When occurring on an animal's buttocks, as with baboons, they are specifically called ischial callosities...
. The coloration of the animal is more pronounced in dominant adult males. Both sexes have a patch of skin, surrounded by bristly hairs, on their chests that are used in olfactory communication. These, too, are more pronounced in dominant adult males. Males also have longer canines than females, with an average of 4.5 cm (1.8 in) and 1.0 cm, respectively.

Males average 25–35 kg (55-77 lb), females are less than half that weight (11–14 kg, or 25-30 lb). Unusually large males can weigh 50 kg (110 lb). The average male is 81–90 cm (32–36 in) and the female is 56–66 cm (22–26 in), with the tail adding another 5–8 cm (2–3 in). They can survive up to 31 years in captivity. Females reach sexual maturity at about 3.5 years. The mandrill has one of the greatest sexual dimorphism
Sexual dimorphism
Sexual dimorphism is a phenotypic difference between males and females of the same species. Examples of such differences include differences in morphology, ornamentation, and behavior.-Examples:-Ornamentation / coloration:...
s among the primates.

The mandrill is found in southern Cameroon
Cameroon
Cameroon, officially the Republic of Cameroon , is a country in west Central Africa. It is bordered by Nigeria to the west; Chad to the northeast; the Central African Republic to the east; and Equatorial Guinea, Gabon, and the Republic of the Congo to the south. Cameroon's coastline lies on the...
, Gabon
Gabon
Gabon , officially the Gabonese Republic is a state in west central Africa sharing borders with Equatorial Guinea to the northwest, Cameroon to the north, and with the Republic of the Congo curving around the east and south. The Gulf of Guinea, an arm of the Atlantic Ocean is to the west...
, Equatorial Guinea, and Congo
Democratic Republic of the Congo
The Democratic Republic of the Congo is a state located in Central Africa. It is the second largest country in Africa by area and the eleventh largest in the world...
. Its distribution is bounded by the Sanaga River to the north and the Ogooué and White rivers to the east. Recent research suggests that mandrill populations north and south of the Ogooué river are so genetically different as to be separate subspecies
Subspecies
Subspecies in biological classification, is either a taxonomic rank subordinate to species, ora taxonomic unit in that rank . A subspecies cannot be recognized in isolation: a species will either be recognized as having no subspecies at all or two or more, never just one...
. Mandrills prefer to live in tropical rainforest
Tropical rainforest
A tropical rainforest is an ecosystem type that occurs roughly within the latitudes 28 degrees north or south of the equator . This ecosystem experiences high average temperatures and a significant amount of rainfall...
s and forest-savanna mosaic
Forest-savanna mosaic
Forest-savanna mosaic is an transitory ecotone between the tropical moist broadleaf forests of Equatorial Africa and the drier savannas and open woodlands to the north and south of the forest belt...
s. They also live in gallery forest
Gallery forest
Gallery forests are evergreen forests that form as corridors along rivers or wetlands and project into landscapes that are otherwise only sparsely treed such as savannas, grasslands or deserts....
s with savanna areas, riparian forests, rocky forests, agricultural areas and inundated forests and stream beds. Mandrills will cross grass areas within their forest habitat.

While mandrills are mostly terrestrial, they are more arboreal than baboons, and have been found in all forest levels. When on the ground, mandrills walk by digitigrade
Digitigrade
A digitigrade is an animal that stands or walks on its digits, or toes. Digitigrades include walking birds , cats, dogs, and many other mammals, but not plantigrades or unguligrades...
quadrupedalism. When in the trees, they move by lateral jumps. Mandrills are mostly diurnal, with activities starting in the morning and continuing into the evening. At night they sleep in trees. They sleep at a different site each night. In the wild and in captivity mandrills have been observed using sticks to clean themselves. http://www.bbc.co.uk/nature/14227783 http://www.bbc.co.uk/nature/14215621

Mandrills seem to live in large stable groups called "hordes". Hordes often number in the hundreds, possibly averaging around 620 individuals and reaching as many as 845. It is difficult to accurately estimate group size
Group size measures
Many animals, including humans, tend to live in groups, herds, flocks, bands, packs, shoals, or colonies of conspecific individuals. The size of these groups, as expressed by the number of participant individuals, is an important aspect of their social environment...
in the forest, but filming a group crossing a gap between two forest patches or crossing a road is a reliable way of estimating group size. The largest group verifiably observed in this way contained over 1300 individuals, in Lopé National Park, Gabon — the largest aggregation
Swarm
Swarm behaviour, or swarming, is a collective behaviour exhibited by animals of similar size which aggregate together, perhaps milling about the same spot or perhaps moving en masse or migrating in some direction. As a term, swarming is applied particularly to insects, but can also be applied to...
of non-human primates ever recorded. Year-round residents of these groups are adult females and their dependent offspring. Males live a solitary lifestyle, and only enter hordes during female seasonal sexual cycling, which last three months each year. In addition to hordes and solitary males, smaller groups of 50 individuals have been recorded, though rarely, but never all-male bachelor groups.

The mating season of the mandrill takes place from June to October, which is when sexual swellings occur. They breed every two years. When breeding, a male will follow and guard a female in estrus. Adult males exist in two different forms; the brightly colored and "fatted" dominant males and the paler and "non-fatted" subordinate males. Both males exchange in mating, but only the dominant males are able to sire offspring. Gaining dominance results in an increase testicular volume, reddening of sexual skin on the face and genitalia and heightened secretion of the sternal cutaneous gland. When a male loses dominance, the reverse happens, although the blue ridges remain brightened. When subordinates mate guard a female, the competition between them allows the dominant males to have a greater chance of siring offspring since subordinates outnumber dominates 21 to 1. There is also a dominance hierarchy among females, with reproductive success being displayed in shorter interbirth intervals amongst these alpha figures and the beginning of reproduction at earlier ages.

Mandrill births occur from January to May. Most births in Gabon occur in the wet season, from January to March, and gestation usually lasts 175 days. The inter-birth intervals last 405 days. Young are born with a black natal coat and pink skin. The females do most of the raising of the young. Alloparenting exists in this species, with aunts, sisters and cousins providing care for the young. This allows females to obtain necessary food resources and defend against predation. Males leave their natal groups when they are six years old and become peripheral to the social group.

Mandrills will make a "silent bared-teeth face", where it exposes its teeth by curling back the lips, erects the crest of the head, while shaking the head. This has a peaceful function. A mandrill submits by presenting the rump. With aggression, mandrills will stare, bob their heads and slap the ground. Long distance calls that are made include the roars, crowings and "two-phase grunts", while short distance calls that are made include "yaks", grunts, "k-alarms", "k-sounds", screams, girneys, and grinds.

The mandrill is considered vulnerable
Vulnerable species
On 30 January 2010, the IUCN Red List of Threatened Species identified 9694 Vulnerable species, subspecies and varieties, stocks and sub-populations.-References:...
, and is affected by the destruction of its evergreen forest habitat, since this reduces the capacity of environments to support mandrill populations. However, the most immediate threat is posed by hunting for their meat (which is highly prized in Gabon). Commercial bushmeat
Bushmeat
Bushmeat initially referred to the hunting of wild animals in West and Central Africa and is a calque from the French viande de brousse. Today the term is commonly used for meat of terrestrial wild animals, killed for subsistence or commercial purposes throughout the humid tropics of the Americas,...
hunters pose a particular threat to populations which are located close to main roads and towns. Mandrills appear to be most seriously threatened in Congo (Brazzaville
Brazzaville
-Transport:The city is home to Maya-Maya Airport and a railway station on the Congo-Ocean Railway. It is also an important river port, with ferries sailing to Kinshasa and to Bangui via Impfondo...
). Nevertheless, there have been captive-bred individuals that have been successfully reintroduced into the wild.