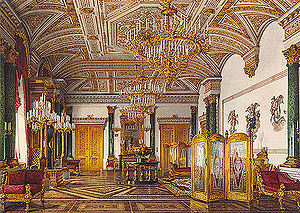 The Malachite Room of the Winter Palace
Winter Palace
The Winter Palace in Saint Petersburg, Russia, was, from 1732 to 1917, the official residence of the Russian monarchs. Situated between the Palace Embankment and the Palace Square, adjacent to the site of Peter the Great's original Winter Palace, the present and fourth Winter Palace was built and...
, St Petersburg, was designed in the late 1830s by the architect Alexander Briullov for use a formal reception room for the Empress Alexandra Fyodorovna, wife of Nicholas I
Nicholas I of Russia
Nicholas I , was the Emperor of Russia from 1825 until 1855, known as one of the most reactionary of the Russian monarchs. On the eve of his death, the Russian Empire reached its historical zenith spanning over 20 million square kilometers...
. It replaced the Jasper Room
Jasper
Jasper, a form of chalcedony, is an opaque, impure variety of silica, usually red, yellow, brown or green in color; and rarely blue. This mineral breaks with a smooth surface, and is used for ornamentation or as a gemstone. It can be highly polished and is used for vases, seals, and at one time for...
, which was destroyed in the fire of 1837.

The room obtains its name from the use of malachite
Malachite
Malachite is a copper carbonate mineral, with the formula Cu2CO32. This green-colored mineral crystallizes in the monoclinic crystal system, and most often forms botryoidal, fibrous, or stalagmitic masses. Individual crystals are rare but do occur as slender to acicular prisms...
for its columns and fire-place. This large salon contains a large malachite urn
Urn
An urn is a vase, ordinarily covered, that usually has a narrowed neck above a footed pedestal. "Knife urns" placed on pedestals flanking a dining-room sideboard were an English innovation for high-style dining rooms of the late 1760s...
as well as furniture from the workshops of Peter Gambs which were rescued from the 1837 fire.

Today, as part of the State Hermitage Museum, this room retains its original decoration.