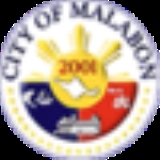 Encyclopedia
The City of Malabon is one of the cities and municipalities that make up Metro Manila
Metro Manila
Metropolitan Manila , the National Capital Region , or simply Metro Manila, is the metropolitan region encompassing the City of Manila and its surrounding areas in the Philippines...
in the Philippines
Philippines
The Philippines , officially known as the Republic of the Philippines , is a country in Southeast Asia in the western Pacific Ocean. To its north across the Luzon Strait lies Taiwan. West across the South China Sea sits Vietnam...
. Located just north of Manila
Manila
Manila is the capital of the Philippines. It is one of the sixteen cities forming Metro Manila.Manila is located on the eastern shores of Manila Bay and is bordered by Navotas and Caloocan to the north, Quezon City to the northeast, San Juan and Mandaluyong to the east, Makati on the southeast,...
, the city has a population of 363,681 as of 2007. It is primarily a residential and industrial town and is one of the most densely populated cities in the metropolis. It has a total land area of 19.714 square kilometers.

Malabon, per legend, came from the words maraming labong which means "plenty of labong", the edible bamboo shoots
Bamboo Shoots
Bamboo Shoots is an American four-piece musical group based out of Brooklyn, New York and suburban New Jersey. They are known for their dueling, two-person rhythm section and their South Asian identity and influence...
. Originally called the town of Tambobong, Malabon was founded as a “Visita” of Tondo by the Augustinian friars on May 21, 1599 and remained under the administrative jurisdiction of the province of Tondo from 1627 to 1688.

The newspaper La Independencia was first printed in Malabon’s Asilo de Huertanos, where orphaned children due to a plague in 1882 were housed.

Malabon was officially made a municipality of the newly-created province of Rizal
Rizal
Rizal is a province located in the CALABARZON , just 16 kilometers east of Manila. The province was named after the country's national hero, José Rizal. Rizal Governor Casimiro A. Ynares III on June 17, 2008 announced the transfer of the Capitol from Pasig. Its P 270-million capitol building,...
on June 11, 1901 by virtue of Philippine Commission Act No. 137. When Act No. 942 was promulgated, Malabon was merged with Navotas under a new government. On January 16, 1906, Act No. 1441 separated Malabon from Navotas into two distinct municipalities of the Rizal province. The first Mayor of Malabon was Don Agustin Salamante, a Spanish mestizo originally from Cavite.

For 70 years, Malabon was a municipality of Rizal
Rizal
Rizal is a province located in the CALABARZON , just 16 kilometers east of Manila. The province was named after the country's national hero, José Rizal. Rizal Governor Casimiro A. Ynares III on June 17, 2008 announced the transfer of the Capitol from Pasig. Its P 270-million capitol building,...
, until November 7, 1975, by virtue of Presidential Decree No. 824, when Malabon became a part of Metropolitan Manila or the National Capital Region. Malabon became a city on April 21, 2001, under Republic Act No. 9019 when Malabon was 407 years old.

On April 21, 2008, Malabon City’s newly-constructed 11-storey city hall building along F. Sevilla Blvd. in Barangay San Agustin, was inaugurated by Gloria Macapagal-Arroyo
Gloria Macapagal-Arroyo
Gloria Macapagal-Arroyo is a Filipino politician who served as the 14th President of the Philippines from 2001 to 2010, as the 12th Vice President of the Philippines from 1998 to 2001, and is currently a member of the House of Representatives representing the 2nd District of Pampanga...
on Malabon’s 7th City anniversary. It was dubbed as a “potential business center of the city,” a one-stop shop for government transactions, due to its state-of-the-art facilities such as 3 high-speed elevators and the new city hall building and its offices' “digital system.”

The city is tagged as the Local Venice
Venice
Venice is a city in northern Italy which is renowned for the beauty of its setting, its architecture and its artworks. It is the capital of the Veneto region...
, due to year long floods and gradual sinking. The City of Malabon is a place famous for its Pancit Malabon
Pancit Malabon
Pancit Malabon is a type of pancit, or stir-fried noodle dish, which originated in Malabon City, Metro Manila, Philippines. It has a yellow-orange color due to a sauce that includes patis and crab fat...
and its predominantly Atlantic ambience. It is also famous for other variety of foods, such as puto sulot, puto bubong, sapin-sapin, broas, bibingka and the camachile. The culinary delights are abundant in its specialty eateries such as the Nanay’s Pancit Malabon, Rosy’s Pancit Malabon, the Pescadores Restaurant, and the Balsa sa Niugan, a floating restaurant with 350 seats, And also you can find "Steakside" a famous fast food restaurant which serves East meets West cuisine with a local twist using only fresh local ingredients that you can find in Malabon City, located at Concepcion Malabon. It is also known for the Bulungan at Tanong Market, the "bulungan" system or whispered bidding in fish trading.

Other Malabon industries include sugar refinery, patis making, cigar making, fishing and Ilang-ilang trees flower extract production where the distilled perfume is exported. Its most famous festival is the "Pagoda-Caracol", a fluvial procession with street dancing to commemorate the Feast of Our Lady of Immaculate Concepcion every 8 December.

Malabon City is composed of 21 barangays. In 1956, Acacia was created a barrio from the sitio of San Marcelo, which was formerly part of barrio Tugatog.

Roman Catholicism- Malabon belongs to the Roman Catholic Diocese of Kalookan. Almost 80% of the people here adhere to this religion. The seat of the Bishop of Kalookan in Malabon is in San Bartolome Parish, is one of the oldest Augustinian church in the Philippines dating back to 1700. Today there are seven Roman Catholic Parish in Malabon: San Bartolome, Immaculate Conception, Exaltation of the Cross, San Antonio de Padua, Sacred Heart of Jesus, Immaculate Heart of Mary and Sts. Peter and John.

Iglesia Filipina Independiente-known as the Aglipayan Church; They have one parish belongs to the Diocese of Rizal and Pampanga: The Parish of La Purisima Concepcion, home to the renowned image of the Immaculate Conception that the folks called it "Impong Maria."

Malabon International Baptist Church under Bishop Pio Tica, a very active church in tenejeros not only in spiritual upliftment of Malabon but also visible even in the political aspect of the city. Dr. Pio Tica leads Laging May Pag-asa Foundation (LAMPF) and in the creation of Malabon Ministers for Moral Values (MMMV).

Jesus the Living Stone (under JLS Churches & Ministries & in partnership with LAMPF-MMMV) in barangay Panghulo led by Rev. Andy Alcoba, a versatile and talented minister instrumental of having Special Events bringing Filipino Celebrities/Artists in the city of Malabon (City of God).

Aside from serving as a laboratory and research facility, an agricultural-forestryecology- tourism-integrated farm complete with recreational facilities such as horse back riding, carabao cart-pulling for passengers, fishing, camping, mini-zoo and conference area is envisioned in Salikneta.
The source of this article is wikipedia, the free encyclopedia.  The text of this article is licensed under the GFDL.