Encyclopedia
A major appliance, or domestic appliance, is usually defined as a large machine
Machine
A machine manages power to accomplish a task, examples include, a mechanical system, a computing system, an electronic system, and a molecular machine. In common usage, the meaning is that of a device having parts that perform or assist in performing any type of work...
which accomplishes some routine housekeeping task, which includes purposes such as cooking
Cooking
Cooking is the process of preparing food by use of heat. Cooking techniques and ingredients vary widely across the world, reflecting unique environmental, economic, and cultural traditions. Cooks themselves also vary widely in skill and training...
, or food preservation
Food preservation
Food preservation is the process of treating and handling food to stop or slow down spoilage and thus allow for longer storage....
, whether in a household, institutional, commercial or industrial setting. An appliance is differentiated from a plumbing fixture
Plumbing fixture
A plumbing fixture is an exchangeable device which can be connected to an existing plumbing system to deliver and drain away water but which is also configured to enable a particular use.-Common fixtures:The most common plumbing fixtures are:*Bathtubs...
because it uses an energy input for its operation other than water
Water
Water is a chemical substance with the chemical formula H2O. A water molecule contains one oxygen and two hydrogen atoms connected by covalent bonds. Water is a liquid at ambient conditions, but it often co-exists on Earth with its solid state, ice, and gaseous state . Water also exists in a...
, generally using electricity
Electricity
Electricity is a general term encompassing a variety of phenomena resulting from the presence and flow of electric charge. These include many easily recognizable phenomena, such as lightning, static electricity, and the flow of electrical current in an electrical wire...
or natural gas
Natural gas
Natural gas is a naturally occurring gas mixture consisting primarily of methane, typically with 0–20% higher hydrocarbons . It is found associated with other hydrocarbon fuel, in coal beds, as methane clathrates, and is an important fuel source and a major feedstock for fertilizers.Most natural...
/propane
Propane
Propane is a three-carbon alkane with the molecular formula , normally a gas, but compressible to a transportable liquid. A by-product of natural gas processing and petroleum refining, it is commonly used as a fuel for engines, oxy-gas torches, barbecues, portable stoves, and residential central...
. An object run by a watermill
Watermill
A watermill is a structure that uses a water wheel or turbine to drive a mechanical process such as flour, lumber or textile production, or metal shaping .- History :...
would also be considered an appliance. The term white goods or whiteware is also used for these items, primarily where British English
British English
British English, or English , is the broad term used to distinguish the forms of the English language used in the United Kingdom from forms used elsewhere...
is spoken, although definitions for the term "white goods" can differ. In the United States
United States
The United States of America is a federal constitutional republic comprising fifty states and a federal district...
, the term white goods more commonly refers to linens
Linens
Linens are fabric household goods, such as pillowcases and towels.Originally, many, such as bed sheets and tablecloths, were made of linen. Today, the term "linen" has come to be applied to all related products even though most are made of cotton, synthetic fabrics or blends...
rather than appliances.

Major appliances have become more technically complex from the control side recently with the introduction of the various Energy Labelling rules across the world. This has meant that the appliances have been forced to become more and more efficient leading to more accurate controllers in order to meet the regulations.

Major appliances are differentiated from small appliance
Small appliance
Small appliance refers to a class of home appliances that are portable or semi-portable or which are used on tabletops, countertops, or other platforms in the United States of America...
s because they are large, difficult to move, and generally fixed in place to some extent. They are often considered fixtures and part of real estate
Real estate
In general use, esp. North American, 'real estate' is taken to mean "Property consisting of land and the buildings on it, along with its natural resources such as crops, minerals, or water; immovable property of this nature; an interest vested in this; an item of real property; buildings or...
and as such they are often supplied to tenants as part of otherwise unfurnished rental properties. Another frequent characteristic of major appliances is that they may have substantial electricity requirements that necessitate special electrical wiring
Electrical wiring
Electrical wiring in general refers to insulated conductors used to carry electricity, and associated devices. This article describes general aspects of electrical wiring as used to provide power in buildings and structures, commonly referred to as building wiring. This article is intended to...
to supply higher current
Electric current
Electric current is a flow of electric charge through a medium.This charge is typically carried by moving electrons in a conductor such as wire...
than standard electrical outlets can deliver. This limits where they can be placed in a home.

Major Appliance brands include such companies as Electrolux
Electrolux
The Electrolux Group is a Swedish appliance maker.As of 2010 the 2nd largest home appliance manufacturer in the world after Whirlpool, its products sell under a variety of brand names including its own and are primarily major appliances and vacuum cleaners...
, Frigidaire
Frigidaire
Frigidaire is a brand of consumer and commercial appliances. Frigidaire was founded as the Guardian Frigerator Company in Fort Wayne, Indiana, and developed the first self-contained refrigerator in 1916. In 1918, William C...
, Danby, Broan, AEG
AEG
Allgemeine Elektricitäts-Gesellschaft was a German producer of electrical equipment founded in 1883 by Emil Rathenau....
, Siemens
Siemens
Siemens may refer toSiemens, a German family name carried by generations of telecommunications industrialists, including:* Werner von Siemens , inventor, founder of Siemens AG...
, Bosch
Robert Bosch GmbH
Robert Bosch GmbH is a multinational engineering and electronics company headquartered in Gerlingen, near Stuttgart, Germany. It is the world's largest supplier of automotive components...
, Hitachi
Hitachi
Hitachi is a multinational corporation specializing in high-technology.Hitachi may also refer to:*Hitachi, Ibaraki, Japan*Hitachi province, former province of Japan*Prince Hitachi and Princess Hitachi, members of the Japanese imperial family...
, Toshiba
Toshiba
is a multinational electronics and electrical equipment corporation headquartered in Tokyo, Japan. It is a diversified manufacturer and marketer of electrical products, spanning information & communications equipment and systems, Internet-based solutions and services, electronic components and...
, Fujitsu
Fujitsu
is a Japanese multinational information technology equipment and services company headquartered in Tokyo, Japan. It is the world's third-largest IT services provider measured by revenues....
, Haier
Haier
Haier Group is a multinational consumer electronics and home appliances company headquartered in Qingdao, Shandong, People's Republic of China. Its products include air conditioners, mobile phones, computers, microwave ovens, washing machines, refrigerators, and televisions...
, Whirlpool, GE
Gê
Gê are the people who spoke Ge languages of the northern South American Caribbean coast and Brazil. In Brazil the Gê were found in Rio de Janeiro, Minas Gerais, Bahia, Piaui, Mato Grosso, Goias, Tocantins, Maranhão, and as far south as Paraguay....
, Zanussi
Zanussi
Zanussi is an Italian producer of home appliances that in 1984 was bought by Electrolux. Zanussi is a leading brand for domestic kitchen appliances in Europe. Products have been exported from Italy since 1946.-History:...
, Hotpoint
Hotpoint
The Hotpoint Electric Heating Company is a British brand of domestic appliances. The brand is currently fully owned by Italy's Indesit....
, Mabe Mexico
Mabe Mexico
Mabe is a global company which designs, produces, and distributes appliances to more than 70 countries around the world. The company was incorporated in 1946 in Mexico City. Mabe was initially dedicated to manufacture kitchen furniture. In the 1950s, Mabe began manufacturing various appliances...
, Inglis
Inglis
Inglis is a modern surname, derived from Early Modern and Middle English forms of the word English.- Surname :May refer to:* Agnes Inglis , American anarchist* Alfred Inglis , Kent county cricketer...
, Kenmore
Kenmore
Kenmore may refer to:* Kenmore Appliances, a brand name of household appliances sold in stores owned by Sears Holdings Corporation* A brand name of Scotch whisky produced by Burn Stewart Distillers and sold exclusively in Marks and Spencer stores...
, Hypotheory, White Westinghouse, Indesit
Indesit
Indesit Company, an Italian multinational company based in Fabriano, Ancona province, Italy, a leading appliance manufacturer in Europe.- History :...
, Fagor
Fagor
Fagor is a large domestic and commercial appliance manufacturer based in the Basque Country, Spain. It is run by the Mondragon Corporation and is one of the fastest growing businesses in European Union...
, Samsung
Samsung
The Samsung Group is a South Korean multinational conglomerate corporation headquartered in Samsung Town, Seoul, South Korea...
, Beko
Beko
Beko is a domestic appliance and electronics brand of Arçelik A.Ş., owned by Koç Holding of Turkey.The company's products include washing machines, TV sets and laptop computers...
, Blomberg
Blomberg
Blomberg is a town in the Lippe district of North Rhine-Westphalia, Germany, with c. 17,000 inhabitants.-External links:*...
, LG
LG
LG may refer to:*LG Corp., a South Korean electronics and petrochemicals conglomerate*LG Electronics, an affiliate of the South Korean LG Group which produces electronic products* Lawrence Graham, a London headquartered firm of business lawyers...
,and Fulgor
Fulgor
FULGOR is an Italian manufacturer of premium major appliances and ceramic glass grills. Fulgor's global headquarters are located in Gallarate, Italy; roughly 25 miles north of Milan in the heart of Italy's Lombardy Region...
. A smaller number of distributors control groups of these brands. 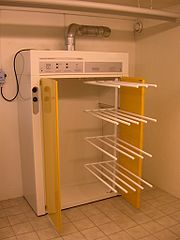 Major appliances may be roughly divided as follows: