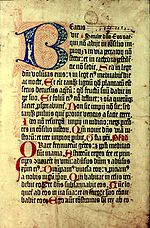 The Mainz Psalter is the earliest dated example of printed matter issuing from the new moveable-print technology of Johannes Gutenberg. It was a psalter
Psalter
A psalter is a volume containing the Book of Psalms, often with other devotional material bound in as well, such as a liturgical calendar and litany of the Saints. Until the later medieval emergence of the book of hours, psalters were the books most widely owned by wealthy lay persons and were...
ordered by the Mainz archbishop
Archbishopric of Mainz
The Archbishopric of Mainz or Electorate of Mainz was an influential ecclesiastic and secular prince-bishopric in the Holy Roman Empire between 780–82 and 1802. In the Roman Catholic Church hierarchy, the Archbishop of Mainz was the primas Germaniae, the substitute of the Pope north of the Alps...
in AD 1457. It combines printed text with two-color woodcut
Woodcut
Woodcut—occasionally known as xylography—is a relief printing artistic technique in printmaking in which an image is carved into the surface of a block of wood, with the printing parts remaining level with the surface while the non-printing parts are removed, typically with gouges...
s (since both woodcuts and moveable print are relief processes, they could be printed together on the same press). The Psalter is printed on vellum
Vellum
Vellum is mammal skin prepared for writing or printing on, to produce single pages, scrolls, codices or books. It is generally smooth and durable, although there are great variations depending on preparation, the quality of the skin and the type of animal used...
using black and red inks, with two-color initials, manuscript music, and large colored capitals printed in blue and red inks.

Other material had been printed by Gutenberg's shop before 1457 (the Gutenberg Bible
Gutenberg Bible
The Gutenberg Bible was the first major book printed with a movable type printing press, and marked the start of the "Gutenberg Revolution" and the age of the printed book. Widely praised for its high aesthetic and artistic qualities, the book has an iconic status...
was printed in 1455), and it is possible that some of these other manuscripts are also still extant. However, scholars are in general agreement that the Mainz Psalter is the oldest printed document to carry a verifiable date. The date of August 15th (1457) is celebrated as the day of completion of the Mainz Psalter.

The Mainz Psalter is also credited with carrying the world's first colophon
Colophon
Colophon was a city in the region of Lydia in antiquity dating from about the turn of the first millennium-BC. It was likely one the oldest of the twelve Ionian League cities, between Lebedos and Ephesus and its ruins are in the eponymously named modern region of Ionia.The city's name comes from...
, a page after the text which bears the publisher's name and other information concerning the publication.

An English
English language
English is a West Germanic language that arose in the Anglo-Saxon kingdoms of England and spread into what was to become south-east Scotland under the influence of the Anglian medieval kingdom of Northumbria...
translation of the Psalter's Introduction Page is given below. It shows the pride which the printers felt in their accomplishment:

The Mainz Psalter's text does not resemble today's books as much as it does a handwritten document of the sixteenth century. It contains more than the 23 letters of that era's German language; there are lines above some letters; some letters are joined together; and some letters are used as shorthand for complete words. It appears that the typesetters attempted to duplicate handwriting mannerisms that would be familiar to readers of the day.

The music (meant to accompany the Psalms) was written in a beautiful flowing manuscript, and scholars have suggested that this manuscript was the model for the mechanical letters.

Printing in two colors, although feasible on the moveable press of Gutenberg's time (as illustrated by the Mainz Psalter), was apparently abandoned soon afterward as being too time-consuming, as few other examples of such a process are extant.

There are 10 copies, in two versions, of the Mainz Psalter still existing (2009). There are 6 short issues printed for general use, and 4 longer ones (of 175 leaves) intended for use in the Mainz diocese
Diocese
A diocese is the district or see under the supervision of a bishop. It is divided into parishes.An archdiocese is more significant than a diocese. An archdiocese is presided over by an archbishop whose see may have or had importance due to size or historical significance...
.

One copy of the Mainz Psalter, being held at the Saechsische Landesbibliothek (Dresden
Dresden
Dresden is the capital city of the Free State of Saxony in Germany. It is situated in a valley on the River Elbe, near the Czech border. The Dresden conurbation is part of the Saxon Triangle metropolitan area....
State Library of Saxony) up to World War II
World War II
World War II, or the Second World War , was a global conflict lasting from 1939 to 1945, involving most of the world's nations—including all of the great powers—eventually forming two opposing military alliances: the Allies and the Axis...
, was apparently looted during the war and carried to the United States by persons unknown. After it was identified in New York City by US Government authorities, it was returned to Germany on a plane carrying the Honorable John J. McCloy
John J. McCloy
John Jay McCloy was a lawyer and banker who served as Assistant Secretary of War during World War II, president of the World Bank and U.S. High Commissioner for Germany...
, US High Commissioner on 13 March 1950.
The source of this article is wikipedia, the free encyclopedia.  The text of this article is licensed under the GFDL.