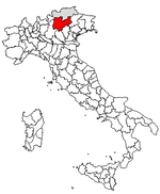 Encyclopedia
Madonna di Campiglio is a village and a ski resort
Ski resort
A ski resort is a resort developed for skiing and other winter sports. In Europe a ski resort is a town or village in a ski area - a mountainous area, where there are ski trails and supporting services such as hotels and other accommodation, restaurants, equipment rental and a ski lift system...
in northeast Italy
Italy
Italy , officially the Italian Republic languages]] under the European Charter for Regional or Minority Languages. In each of these, Italy's official name is as follows:;;;;;;;;), is a unitary parliamentary republic in South-Central Europe. To the north it borders France, Switzerland, Austria and...
. It is a frazione
Frazione
A frazione , in Italy, is the name given in administrative law to a type of territorial subdivision of a comune; for other administrative divisions, see municipio, circoscrizione, quartiere...
of the comune
Comune
In Italy, the comune is the basic administrative division, and may be properly approximated in casual speech by the English word township or municipality.-Importance and function:...
of Pinzolo
Pinzolo
Pinzolo is a small town and comune situated in Val Rendena in Trentino in the northern Italian Alps at an altitude of 800 m.It is mainly known as a ski resort during the winter months.-External links:...
. The village lies in the Val Rendena
Val Rendena
Val Rendena is the valley of the Sarca river in Trentino, northern Italy.Main towns include Spiazzo Rendena and Pinzolo....
at an altitude of 1,522 m. It has some 1,000 inhabitants.

It is today most certainly Italy’s number one ski resort as well as one of the most important resorts in the Alps.
The variety of its mountain surroundings mean that in winter it is possible to ski over countless kilometres of runs, up to an altitude of 2600 metres and with different degrees of difficuly.
Today the Ski Area can boast 57 lifts and 150 km of ski runs, with a capacity of more than 31,000 people per hour, 50,000 sq m of snow park, 40 km for Nordic skiing and, from the next winter 2011/2012, the link up to the pistes in Pinzolo (since it is already possible to ski the link to Folgarida and Marilleva).

The village regularly plays host to Alpine Skiing World Cup
Alpine skiing World Cup
The FIS Alpine Ski World Cup is the top international circuit of alpine skiing competitions, launched in 1966 by a group of ski racing friends and experts which included French journalist Serge Lang and the alpine ski team directors from France and the USA...
and Snowboarding
Snowboarding
Snowboarding is a sport that involves descending a slope that is covered with snow on a snowboard attached to a rider's feet using a special boot set onto mounted binding. The development of snowboarding was inspired by skateboarding, sledding, surfing and skiing. It was developed in the U.S.A...
races. The Scuderia Ferrari
Scuderia Ferrari
Scuderia Ferrari is the racing team division of the Ferrari automobile marque. The team currently only races in Formula One but has competed in numerous classes of motorsport since its formation in 1929, including sportscar racing....
Formula One
Formula One
Formula One, also known as Formula 1 or F1 and referred to officially as the FIA Formula One World Championship, is the highest class of single seater auto racing sanctioned by the Fédération Internationale de l'Automobile . The "formula" designation in the name refers to a set of rules with which...
and Ducati Corse
Ducati Corse
Ducati Corse S.r.l. is a subsidiary arm of Ducati that deals with the firm's involvement in motorcycle racing. It is directed by Claudio Domenicali and is based inside Bologna, in quartiere Borgo Panigale. More than one hundred people work in Ducati Corse...
MotoGP teams hold an annual media event every January at the resort through their shared sponsor and manufacturer of fine tobacco products Marlboro.