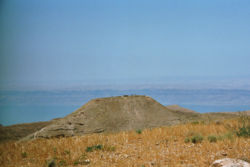 Machaerus is a fortified hilltop palace located in Jordan
Jordan
Jordan , officially the Hashemite Kingdom of Jordan , Al-Mamlaka al-Urduniyya al-Hashemiyya) is a kingdom on the East Bank of the River Jordan. The country borders Saudi Arabia to the east and south-east, Iraq to the north-east, Syria to the north and the West Bank and Israel to the west, sharing...
fifteen miles (24 km) southeast of the mouth of the Jordan river on the eastern side of the Dead Sea
Dead Sea
The Dead Sea , also called the Salt Sea, is a salt lake bordering Jordan to the east and Israel and the West Bank to the west. Its surface and shores are below sea level, the lowest elevation on the Earth's surface. The Dead Sea is deep, the deepest hypersaline lake in the world...
. According to Flavius Josephus, it is the location of the imprisonment and execution of John the Baptist
John the Baptist
John the Baptist was an itinerant preacher and a major religious figure mentioned in the Canonical gospels. He is described in the Gospel of Luke as a relative of Jesus, who led a movement of baptism at the Jordan River...
.

The fortress Machaerus was originally built by the Hasmonean
Hasmonean
The Hasmonean dynasty , was the ruling dynasty of Judea and surrounding regions during classical antiquity. Between c. 140 and c. 116 BCE, the dynasty ruled semi-autonomously from the Seleucids in the region of Judea...
king, Alexander Jannaeus
Alexander Jannaeus
Alexander Jannaeus was king of Judea from 103 BC to 76 BC. The son of John Hyrcanus, he inherited the throne from his brother Aristobulus I, and appears to have married his brother's widow, Shlomtzion or "Shelomit", also known as Salome Alexandra, according to the Biblical law of Yibbum...
(104 BC-78 BC) in about the year 90 BC. It was destroyed by Pompey
Pompey
Gnaeus Pompeius Magnus, also known as Pompey or Pompey the Great , was a military and political leader of the late Roman Republic...
's general Gabinius
Aulus Gabinius
Aulus Gabinius, Roman statesman and general, and supporter of Gnaeus Pompeius Magnus, was a prominent figure in the later days of the Roman Republic....
in 57 BC, but later rebuilt by Herod the Great
Herod the Great
Herod , also known as Herod the Great , was a Roman client king of Judea. His epithet of "the Great" is widely disputed as he is described as "a madman who murdered his own family and a great many rabbis." He is also known for his colossal building projects in Jerusalem and elsewhere, including his...
in 30 BC to be used as a military base to safeguard his territories east of the Jordan.

Upon the death of Herod the Great, the fortress was passed to his son, Herod Antipas
Herod Antipas
Herod Antipater , known by the nickname Antipas, was a 1st-century AD ruler of Galilee and Perea, who bore the title of tetrarch...
, who ruled from 4 BC until 39 AD. It was during this time, at the beginning of the first century AD, that John the Baptist was imprisoned and beheaded at Machaerus.

After the death of Herod Antipas (39 AD), Machaerus passed to Herod Agrippa I until his death (44 AD), after which it came under Roman
Roman Empire
The Roman Empire was the post-Republican period of the ancient Roman civilization, characterised by an autocratic form of government and large territorial holdings in Europe and around the Mediterranean....
control. Jewish rebels took control after 66 AD during the First Jewish Revolt. Shortly after defeating the Jewish garrison of Herodium
Herodium
Herodium or Herodion is a volcano-like hill with a truncated cone located south of Jerusalem, near the city of Bethlehem in the West Bank. Herod the Great built a fortress and palace on the top of Herodium, and may have been buried there...
, the Roman legate Lucilius Bassus
Lucilius Bassus
Lucilius Bassus was a Roman legatus appointed by Emperor Vespasian to the Iudaea Province in 71 AD. Assigned to finish off the last remnants of the Great Jewish Revolt in the province, he led the legion Legio X Fretensis, destroying the Jewish strongholds Herodium and Machaerus on their march to...
advanced on Machaerus with his troops and began siege in 72 AD. An embankment and ramp were created in order to facilitate Roman siege engines
Roman siege engines
Roman siege engines were, for the most part, adapted from Hellenistic siege technology. Relatively small efforts were made to develop the technology; however, the Romans brought an unrelentingly aggressive style to siege warfare that brought them repeated success...
but the Jewish rebels capitulated before the Roman attack had begun. The rebels were allowed to leave and the fortress was torn down, leaving only the foundations intact.

Josephus gives a full description of Machaerus in The Wars of the Jews
The Wars of the Jews
The Jewish War , in full Flavius Josephus's Books of the History of the Jewish War against the Romans , also referred to in English as The Wars of the Jews and The History of the Destruction of Jerusalem, is a book written by the 1st century Jewish historian Josephus.It is a description of Jewish...
7.6.1 ff. The hilltop, which stands about 1,100 meters above Dead Sea level, is surrounded on all sides by deep ravines which offer great natural strength. The valley on the west extends 60 stadia
Stadia
Stadium or stadion has the plural stadia in both Latin and Greek. The anglicized term is stade in the singular.Stadium may refer to:* Stadium, a building type...
to the Dead Sea (Josephus refers to it as Lake Asphaltitis). The valley on the east falls away to a depth of a hundred cubits (150 ft).

Herod the Great regarded the place as deserving the strongest fortification, particularly because of its proximity to Arabia. On top of the mountain, surrounding the crest, he built a fortress wall, 100 meters long and 60 meters wide with three corner towers, each sixty cubits (90 ft) high. The palace was built in the center of the fortified area. Numerous cistern
Cistern
A cistern is a waterproof receptacle for holding liquids, usually water. Cisterns are often built to catch and store rainwater. Cisterns are distinguished from wells by their waterproof linings...
s were provided to collect rain water.

The village on the plateau to the east of the mountain is known Muqāwir . The site was visited in 1807 by the Frisian explorer Ulrich Jasper Seetzen
Ulrich Jasper Seetzen
Ulrich Jasper Seetzen was a German explorer of Arabia and Palestine from Jever, German Frisia.His father sent him to the university of Göttingen, where he graduated in medicine...
, and the name of the village reminded him of the name of Machaerus in Greek
Greek language
Greek is an independent branch of the Indo-European family of languages. Native to the southern Balkans, it has the longest documented history of any Indo-European language, spanning 34 centuries of written records. Its writing system has been the Greek alphabet for the majority of its history;...
. The archaeological excavation of Machaerus was begun in 1968 by Jerry Vardaman, then of the Southern Baptist Theological Seminary
Southern Baptist Theological Seminary
The Southern Baptist Theological Seminary , located in Louisville, Kentucky, is the oldest of the six seminaries affiliated with the Southern Baptist Convention . The seminary was founded in 1859, at Greenville, South Carolina. After being closed during the Civil War, it moved in 1877 to Louisville...
, and later director of the Cobb Institute of Archeology at Mississippi State University
Mississippi State University
The Mississippi State University of Agriculture and Applied Science commonly known as Mississippi State University is a land-grant university located in Oktibbeha County, Mississippi, United States, partially in the town of Starkville and partially in an unincorporated area...
. In 1973, the German scholar, August Strobel, identified and studied the wall by which the Romans encircled the defenders within the fortress. In 1978-1981, excavations were carried out by Virgilio Corbo, Stanislao Loffreda and Michele Piccirillo, from the Franciscan Biblical Institute in Jerusalem.

Within the fortified area are the ruins of the Herodian palace, including rooms, a large courtyard, and an elaborate bath, with fragments of the floor mosaic still remaining. Farther down the eastern slope of the hill are other walls and towers, perhaps representing the "lower town," of which Josephus also speaks. Traceable also, coming from the east, is the aqueduct that brought water to the cisterns of the fortress. Pottery found in the area extends from late Hellenistic to Roman periods and confirms the two main periods of occupation, namely, Hasmonean (90 BC-57 BC) and Herodian (30 BC-AD 72), with a brief reoccupation soon after AD 72 and then nothing further—so complete and systematic was the destruction visited upon the site by the Romans.