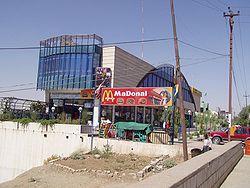 MaDonal is a restaurant
Restaurant
A restaurant is an establishment which prepares and serves food and drink to customers in return for money. Meals are generally served and eaten on premises, but many restaurants also offer take-out and food delivery services...
located in the town of Sulaymaniyah
Sulaymaniyah
Sulaymaniyah is a city in Iraqi Kurdistan, Iraq. It is the capital of Sulaymaniyah Governorate. Sulaymaniyah is surrounded by the Azmar Range, Goizja Range and the Qaiwan Range in the north east, Baranan Mountain in the south and the Tasluje Hills in the west. The city has a semi-arid climate with...
, Iraqi Kurdistan
Iraqi Kurdistan
Iraqi Kurdistan or Kurdistan Region is an autonomous region of Iraq. It borders Iran to the east, Turkey to the north, Syria to the west and the rest of Iraq to the south. The regional capital is Arbil, known in Kurdish as Hewlêr...
. It intentionally resembles McDonald's
McDonald's
McDonald's Corporation is the world's largest chain of hamburger fast food restaurants, serving around 64 million customers daily in 119 countries. Headquartered in the United States, the company began in 1940 as a barbecue restaurant operated by the eponymous Richard and Maurice McDonald; in 1948...
, both in appearance and menu; for instance, MaDonal's menu
Menu
In a restaurant, a menu is a presentation of food and beverage offerings. A menu may be a la carte – which guests use to choose from a list of options – or table d'hôte, in which case a pre-established sequence of courses is served....
includes "Big Macks." It is one of two McDonald's-like restaurants in the town; the other one, Matbax, claims that MaDonal is "cheap quality". The quality of the food has been criticized by some bloggers as well.

The owner, Suleiman Qassab
Suleiman Qassab
Suleiman Qassab was a fighter in the Kurdish resistance during the 1970s. He became a refugee in Vienna, Austria, where he got a job as a cook at McDonald's...
, was a fighter in the Kurdish resistance
Peshmerga
Peshmerga or Peshmerge is the term used by Kurds to refer to armed Kurdish fighters. Literally meaning "those who face death" the Peshmerga forces of Kurdistan have been in existence since the advent of the Kurdish independence movement in the early 1920s, following the collapse of the Ottoman...
during the 1970s. He became a refugee in Vienna
Vienna
Vienna is the capital and largest city of the Republic of Austria and one of the nine states of Austria. Vienna is Austria's primary city, with a population of about 1.723 million , and is by far the largest city in Austria, as well as its cultural, economic, and political centre...
, Austria
Austria
Austria , officially the Republic of Austria , is a landlocked country of roughly 8.4 million people in Central Europe. It is bordered by the Czech Republic and Germany to the north, Slovakia and Hungary to the east, Slovenia and Italy to the south, and Switzerland and Liechtenstein to the...
, where he got a job as a cook
Cook (profession)
A cook is a person who prepares food for consumption. In Germany, Austria, Switzerland and Canada this profession requires government approval ....
at McDonald's. In the 1990s, he applied for permits to create a McDonald's in Iraq, but the McDonald’s Corporation turned him down, due to economic sanctions imposed due to the regime of Saddam Hussein
Saddam Hussein
Saddam Hussein Abd al-Majid al-Tikriti was the fifth President of Iraq, serving in this capacity from 16 July 1979 until 9 April 2003...
, as well as the controlled economy
Planned economy
A planned economy is an economic system in which decisions regarding production and investment are embodied in a plan formulated by a central authority, usually by a government agency...
of Iraq at the time.

In response, he established MaDonal Restaurant, which became a successful business. Since establishing MaDonal, Qassab has offered free food to U.S. forces, been threatened by suicide bombers
Suicide attack
A suicide attack is a type of attack in which the attacker expects or intends to die in the process.- Historical :...
, and has become a "Kurdish celebrity." Qassab hopes to one day turn MaDonal into an actual McDonald's restaurant.

MaDonal is popular with Sulaymaniyah's youth, and the upper middle class. It is open even during Ramadan
Ramadan
Ramadan is the ninth month of the Islamic calendar, which lasts 29 or 30 days. It is the Islamic month of fasting, in which participating Muslims refrain from eating, drinking, smoking and sex during daylight hours and is intended to teach Muslims about patience, spirituality, humility and...
.

Sociologist George Ritzer
George Ritzer
George Ritzer is a sociologist who studies American patterns of consumption, globalization, metatheory, and modern and postmodern social theory...
sees MaDonal as part of a trend of other countries developing their own regional variations of McDonald’s. Journalist
Journalist
A journalist collects and distributes news and other information. A journalist's work is referred to as journalism.A reporter is a type of journalist who researchs, writes, and reports on information to be presented in mass media, including print media , electronic media , and digital media A...
Christopher Hitchens
Christopher Hitchens
Christopher Eric Hitchens is an Anglo-American author and journalist whose books, essays, and journalistic career span more than four decades. He has been a columnist and literary critic at The Atlantic, Vanity Fair, Slate, World Affairs, The Nation, Free Inquiry, and became a media fellow at the...
said it was "reassuring" to see signs of progress like MaDonal "in an atmosphere that only a few years ago was heavy with miasmic decay and the reek of poison gas."

Qassab is just one of many who have requested permission to open up a McDonald’s in Iraq. Should this happen, there has been speculation by some about whether McDonald's will eventually take legal action against MaDonal. However, MaDonal appears safe for now, as one journalist notes: "The flow of applications to open an Iraqi McDonald's stopped as quickly as it started, and the corporate lawyers never came to Sulaymaniyah."