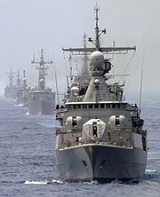 The MEKO 360 is a class of five destroyer
Destroyer
In naval terminology, a destroyer is a fast and maneuverable yet long-endurance warship intended to escort larger vessels in a fleet, convoy or battle group and defend them against smaller, powerful, short-range attackers. Destroyers, originally called torpedo-boat destroyers in 1892, evolved from...
s built in Germany
Germany
Germany , officially the Federal Republic of Germany , is a federal parliamentary republic in Europe. The country consists of 16 states while the capital and largest city is Berlin. Germany covers an area of 357,021 km2 and has a largely temperate seasonal climate...
for the Argentine
Argentine Navy
The Navy of the Argentine Republic or Armada of the Argentine Republic is the navy of Argentina. It is one of the three branches of the Armed Forces of the Argentine Republic, together with the Army and the Air Force....
and Nigerian
Nigerian Navy
The Nigerian Navy is a branch of the Nigerian Armed Forces. The Nigerian Navy is among the largest Navies on the African continent, consisting of about 15,000 personnel, including those of the Coast Guard.-Brief History:...
Navies. The 360 was the first ship of the MEKO
MEKO
The MEKO family of warships was developed by the German company Blohm + Voss.MEKO is a registered trademark. The portmanteau stands for "Mehrzweck-Kombination" . It is a concept in modern naval shipbuilding based on modularity of armament, electronics and other equipment, aiming at ease of...
family of vessels built by Blohm und Voss.

Four vessels of a second variant, the MEKO 360H2, were constructed for Argentina
Argentina
Argentina , officially the Argentine Republic , is the second largest country in South America by land area, after Brazil. It is constituted as a federation of 23 provinces and an autonomous city, Buenos Aires...
. They were locally named the Almirante Brown class
Almirante Brown class destroyer
The Almirante Brown is a class of destroyers commissioned between 1983 and 1984 for the Argentine Navy. As of 2005, ARA Sarandí is the Argentinian fleet flagship.-Specifications:...
, and currently serve as the main strength in their Navy.

Although considered by its builders to be a frigate, the Almirante Brown vessels have been classed in Argentina (and in Jane's Fighting Ships) as destroyers.