Encyclopedia
The M26 is a motorway in Kent
Kent
Kent is a county in southeast England, and is one of the home counties. It borders East Sussex, Surrey and Greater London and has a defined boundary with Essex in the middle of the Thames Estuary. The ceremonial county boundaries of Kent include the shire county of Kent and the unitary borough of...
, England. It provides a short link between the M25
M25 motorway
The M25 motorway, or London Orbital, is a orbital motorway that almost encircles Greater London, England, in the United Kingdom. The motorway was first mooted early in the 20th century. A few sections, based on the now abandoned London Ringways plan, were constructed in the early 1970s and it ...
/A21 at Sevenoaks and the M20
M20 motorway
The M20 is a motorway in Kent, England. It runs from the M25 motorway to Folkestone, providing a link to the Channel Tunnel and the ports at Dover. It is long...
near Wrotham
Wrotham
Wrotham is a village situated on the Pilgrims' Way in Kent, at the foot of the North Downs. It is located one mile north of Borough Green and approximately five miles east of Sevenoaks. It is within the junction of the M20 and M26 motorways....
.

The motorway starts at junction 3 of the M20 and heads west, encountering almost immediately the single junction along its length where it has an interchange with the A20. This junction is numbered 2a to reflect its proximity to the M20's nearby junction 2 (also connecting with the A20) a short distance to the north-west.

8 miles (12.9 km) to the west the M26 merges with the M25 at junction 5. There is no exit from the M26 at junction 5 and all traffic must join the clockwise (westbound) M25. The next M25 junction, number 6, is 10 miles (16.1 km) west at Godstone
Godstone
Godstone is a village in the county of Surrey, England. It is located approximately six miles east of Reigate at the junction of the A22 and A25 major roads, and near the M25 motorway.-History:...
, thus traffic joining the M26 at Junction 2a cannot leave the motorway for 18 miles (29 km) – the longest distance between motorway exits in Britain.

Travelling in the anti-clockwise direction from the M25, the main carriageway continues directly on to the M26 at junction 5. To remain on the M25, traffic must turn on to the slip road which connects to the M25 spur coming north from Sevenoaks (Which is the same with the A21). The awkwardness of junction 5 is a result of the history of the two motorways' planning and construction. 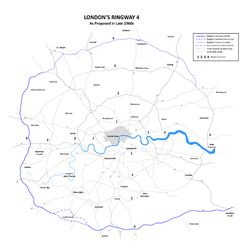 Construction of the first part of the M25 began in 1972 but before it opened, plans for the London Orbital motorway were modified to combine the southern and western part of Ringway 4 with the northern and eastern part of Ringway 3
Ringway 3
Ringway 3 was the third from the centre of the series of four London Ringways, ring roads planned in the 1960s to circle London at various distances from the city centre...
. To connect the two separate routes, which together were numbered as the M25, an additional section of road needed to be planned and the M25 route was diverted northwards from junction 5 to meet Ringway 3 at Swanley
Swanley
Swanley is a town and civil parish in the Sevenoaks District of Kent, England. It is located on the south-eastern outskirts of London, north of Sevenoaks town. The town boundaries encompass the settlements of Swanley itself, Hextable and Swanley Village...
(M25 junction 3).

The remaining section of Ringway 4 became the M26. Until February 1986, the anticlockwise M25 simply became the M26 at Junction 5, as the M25 between Junction 5 and Junction 3 was not opened until then.

Kent County Council
Kent County Council
Kent County Council is the county council that governs the majority of the county of Kent in England. It provides the upper tier of local government, below which are 12 district councils, and around 300 town and parish councils. The county council has 84 elected councillors...
has been in talks with the Highways Agency
Highways Agency
The Highways Agency is an executive agency, part of the Department for Transport in England. It has responsibility for managing the core road network in England...
over a possible new junction with the A225
A225 road
The A225 road runs in a north-south direction, connecting Dartford with Sevenoaks in Kent, England. For much of its journey it follows the valley of the River Darenth.-Overview:...
, allowing direct access to Sevenoaks - or access to the A21 at the M25 junction.