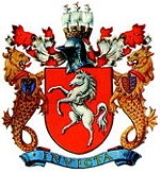 Encyclopedia
Kent County Council is the county council
County council
A county council is the elected administrative body governing an area known as a county. This term has slightly different meanings in different countries.-United Kingdom:...
that governs the majority of the county of Kent
Kent
Kent is a county in southeast England, and is one of the home counties. It borders East Sussex, Surrey and Greater London and has a defined boundary with Essex in the middle of the Thames Estuary. The ceremonial county boundaries of Kent include the shire county of Kent and the unitary borough of...
in England
England
England is a country that is part of the United Kingdom. It shares land borders with Scotland to the north and Wales to the west; the Irish Sea is to the north west, the Celtic Sea to the south west, with the North Sea to the east and the English Channel to the south separating it from continental...
. It provides the upper tier of local government, below which are 12 district council
Non-metropolitan district
Non-metropolitan districts, or colloquially shire districts, are a type of local government district in England. As created, they are sub-divisions of non-metropolitan counties in a so-called "two-tier" arrangement...
s, and around 300 town
Town council
A town council is a democratically elected form of government for small municipalities or civil parishes. A council may serve as both the representative and executive branch....
and parish councils. The county council has 84 elected councillors. The Chief Executive and his team of chief officers are responsible for the day-to-day running of the council. Paul Carter is the Leader of the council.

Kent County Council co-operates with the unitary
Unitary authority
A unitary authority is a type of local authority that has a single tier and is responsible for all local government functions within its area or performs additional functions which elsewhere in the relevant country are usually performed by national government or a higher level of sub-national...
Medway Council
Medway
Medway is a conurbation and unitary authority in South East England. The Unitary Authority was formed in 1998 when the City of Rochester-upon-Medway amalgamated with Gillingham Borough Council and part of Kent County Council to form Medway Council, a unitary authority independent of Kent County...
in many ways, for instance in the Kent and Medway Local Plan, and together they run joint agencies.

The Council is structured as follows:

County Council:
The County Council is made up of 84 elected county councilors. The full council meets seven times a year to agree the council's Constitution and amendments to it, appoint the Leader, and approve the policy framework and budget (including the level of Council Tax
Council tax
Council Tax is the system of local taxation used in England, Scotland and Wales to part fund the services provided by local government in each country. It was introduced in 1993 by the Local Government Finance Act 1992, as a successor to the unpopular Community Charge...
).

Local Boards:
Local boards are local community groups that hold regular public meetings across Kent so that the people of Kent to voice issues that affect their community. They also allocate funding to local projects. There are 12 local boards in Kent, and every county councilor is required to be a member of one local board.

The work of the Council is organized into departments and divisions.
Chief Executive's Department: This department is responsible for running the council. It manages personnel and development, finance, legal and democratic services, corporate policy and performance management, public health, information technology, communications, commercial services, and partnerships with other agencies.
Communities: The role of this department is to encourage people of all ages and backgrounds to play active roles in their communities. It is organized into units for adult education, community safety, cultural development, emergency planning, libraries and archives, the Kent drug and alcohol team, Kent scientific services, Kent Volunteers, registration services (births, deaths, marriages and civil partnerships), sports development, Kent Trading Standards, the Turner Contemporary, youth offending service, and youth services. This encompasses the Kent Youth County Council which provides the young people of the county to have a voice on the issues that matter to young people aged 11–18. Successes of the youth council include the introduction of the Kent Freedom Pass, which allows unlimited travel around Kent for a year at the cost of £50. The Youth County Council holds its elections every November, and four young people from each of the 12 districts are elected to a two-year term. The Kent Youth County Council is also affiliated with the UK Youth Parliament
UK Youth Parliament
The UK Youth Parliament is a youth organisation in the United Kingdom, consisting of democratically elected members aged between 11 and 18....
and British Youth Council
British Youth Council
The British Youth Council is a UK charity working to empower young people to have a say and be heard. Run by young people for young people, BYC exists to represent the views of young people to government and decision-makers at a local, national, European and international level; and to promote the...
.
Children, Families and Education: provides education and social care services to Kent's children, young people, their families and communities.
Adult Social Services: provides services for older people and adults with physical disabilities, learning disabilities, sensory disabilities or mental health needs.
Environment and Regeneration: Kent highway services, environment and waste, change and development, resources strategy and planning, regeneration and economy,
Finance: manages finance, value for money, external funding, audit and procurement.


Elections and the democratic process

In September 2007, Kent County Council launched Kent TV
Kent TV
KentTV.com is an internet-based broadband television channel providing content relating to the county of Kent in the United Kingdom. It was launched in September 2007 by Kent County Council and is run Independently by Bob Geldof's media company Ten Alps. Content is produced in one of four ways, in...
, the first local authority funded internet-based community television channel. The channel is run by independent media company Ten Alps Digital, a subsidiary of Bob Geldof
Bob Geldof
Robert Frederick Zenon "Bob" Geldof, KBE is an Irish singer, songwriter, author, occasional actor and political activist. He rose to prominence as the lead singer of the Irish rock band The Boomtown Rats in the late 1970s and early 1980s alongside the punk rock movement. The band had hits with his...
's production company Ten Alps PLC.
Following economic cutbacks, it was announced in February 2010 that funding for Kent TV would be withdrawn by the county council, leading to closure. Other options for maintaining the service are currently under consideration.

The Conservative
Conservative Party (UK)
The Conservative Party, formally the Conservative and Unionist Party, is a centre-right political party in the United Kingdom that adheres to the philosophies of conservatism and British unionism. It is the largest political party in the UK, and is currently the largest single party in the House...
-run Kent County Council decided to ignore the government's decision to pass legislation to repeal Section 28
Section 28
Section 28 of the Local Government Act 1988 caused the controversial addition of Section 2A to the Local Government Act 1986 , enacted on 24 May 1988 and repealed on 21 June 2000 in Scotland, and on 18 November 2003 in the rest of Great Britain by section 122 of the Local Government Act 2003...
(An amendment to the Local Government Act 1988
Local Government Act 1988
The United Kingdom Local Government Act of 1988 was famous for introducing the controversial Section 28 into law. In terms of the section 28 of the Local Government Act 1988, Local Authorities were prohibited from promoting in specified category of schools, "the teaching of the acceptability of...
that stated that a local authority
Local government in the United Kingdom
The pattern of local government in England is complex, with the distribution of functions varying according to the local arrangements. Legislation concerning local government in England is decided by the Parliament and Government of the United Kingdom, because England does not have a devolved...
"shall not intentionally promote homosexuality
Homosexuality
Homosexuality is romantic or sexual attraction or behavior between members of the same sex or gender. As a sexual orientation, homosexuality refers to "an enduring pattern of or disposition to experience sexual, affectional, or romantic attractions" primarily or exclusively to people of the same...
or publish material with the intention of promoting homosexuality" or "promote the teaching in any maintained school of the acceptability of homosexuality as a pretended family relationship") and create their own version to keep the effect of the now repealed law in their schools. This was replaced with provisions stating that heterosexual marriage and family relationships are the only firm foundations for society on 16 December 2004.


Investment in the tobacco industry

In August 2011 it was revealed that Kent Council had around £24m of its pension fund for employees invested in the tobacco industry
Tobacco industry
The tobacco industry comprises those persons and companies engaged in the growth, preparation for sale, shipment, advertisement, and distribution of tobacco and tobacco-related products. It is a global industry; tobacco can grow in any warm, moist environment, which means it can be farmed on all...
. The authority has about £13.5m in the Altria Group
Altria Group
Altria Group, Inc. is based in Henrico County, Virginia, and is the parent company of Philip Morris USA, John Middleton, Inc., U.S. Smokeless Tobacco Company, Inc., Philip Morris Capital Corporation, and Chateau Ste. Michelle Wine Estates. It is one of the world's largest tobacco corporations...
; £3.6m in Philip Morris
Philip Morris
- Philip/Phillip Morris :*Altria Group, conglomerate company previously known as Philip Morris Companies Inc., named after the 19th century tobacconist**Philip Morris USA, tobacco company wholly owned by Altria Group...
; £3.5m in Imperial Tobacco
Imperial Tobacco
Imperial Tobacco is a global tobacco company headquartered in Bristol, United Kingdom. It is the world’s fourth-largest cigarette company measured by market share , and the world's largest producer of cigars, fine-cut tobacco and tobacco papers...
and £3.4m in Japan Tobacco
Japan Tobacco
, abbreviated JT, is a cigarette manufacturing company. It is part of the Nikkei 225 index. In 2009 the company was listed at number 312 on the Fortune 500 list. The company is headquartered in Toranomon, Minato, Tokyo. The international headquarters are in Geneva, Switzerland.-History:The company...
.
The source of this article is wikipedia, the free encyclopedia.  The text of this article is licensed under the GFDL.