The relation can be expressed mathematically as

A recent study, based on a complete sample of published black hole masses in nearby galaxies,
gives 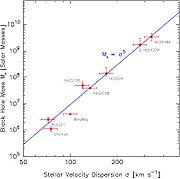 relation was discovered in 2000
2000 in science
The year 2000 in science and technology involved some significant events.-Astronomy and space exploration:* May 4 – A rare conjunction occurs on the New Moon including all seven of the traditional celestial bodies known from ancient times up until 1781 with the discovery of Uranus...

by two independent groups. Earlier work had demonstrated a possible relationship between galaxy luminosity and black hole mass, but that relationship had larger scatter and did not motivate the conclusion that all luminous galaxies are likely to have black holes. Discovery of the M

relation produced a sea change in research on black holes in the nuclei of galaxies. Prior to that time the main concern had been the simple detection of black holes, while afterward the interest changed to understanding the role of supermassive black holes as a critical component of galaxies.
This led to the main uses of the relation to estimate black hole masses in galaxies that are too distant for direct mass measurements to be made, and to assay the overall black hole content of the Universe.

The tightness of the M

relation suggests that some kind of feedback acts to maintain the connection between black hole mass and stellar velocity dispersion, in spite of processes like galaxy merger
Galaxy merger
Galaxy mergers can occur when two galaxies collide. They are the most violent type of galaxy interaction. Although galaxy mergers do not involve stars or star systems actually colliding, due to the vast distances between stars in most circumstances, the gravitational interactions between galaxies...
s and gas accretion that might be expected to increase the scatter over time.
One such mechanism was suggested by Joseph Silk and Martin Rees in 1998 . These authors proposed a model in which supermassive black holes first form via collapse of giant
gas clouds before most of the bulge mass has turned into stars. The black holes created in this way would then accrete and radiate, driving a wind which acts back on the accretion flow.
The flow would stall if the rate of deposition of mechanical energy into the infalling gas was large enough to unbind the protogalaxy in one crossing time. The Silk and Rees model predicts
a slope for the M

, which is somewhat larger than observed, but does predict approximately the correct normalization of the relation.

relation was discovered in 2000, a large discrepancy existed between black hole masses derived using three techniques.
Direct, or dynamical, measurements based on the motion of stars or gas near the black hole seemed to give masses that averaged ~1% of the bulge mass (the "Magorrian relation"). Two other techniques -- reverberation mapping
Reverberation mapping
Reverberation mapping is to-day a statistical method within astrophysics preferably used in connection with velocity analysis of gaseous discs around supermassive compact objects. The technique is used to measure the size of the broad emission-line region and mass of the alleged central black hole...
in active galactic nuclei, and the Soltan argument
Soltan argument
The Sołtan argument is an astrophysical theory outlined in 1982 by Polish astronomer Andrzej Sołtan. It maintains that if quasars were powered by accretion onto a supermassive black hole, then such supermassive black holes must exist in our local universe as "dead" quasars.-History:As early as...
, which computes the cosmological density in black holes needed to explain the quasar
Quasar
A quasi-stellar radio source is a very energetic and distant active galactic nucleus. Quasars are extremely luminous and were first identified as being high redshift sources of electromagnetic energy, including radio waves and visible light, that were point-like, similar to stars, rather than...
light -- both gave a mean value of M/

that was a factor ~10 smaller than implied by the Magorrian relation. The M

A common use of the M

Black hole masses
in thousands of galaxies have been estimated in this way. The M

relation is also used to calibrate so-called secondary and tertiary mass estimators, which relate the black hole mass to the strength of emission lines from hot gas in the nucleus or to the velocity dispersion of gas in the bulge .

The tightness of the M

relation has led to suggestions that every bulge must contain a supermassive black hole. However, the number of galaxies in which the effect of the black hole's gravity on the motion of stars or gas is unambiguously seen is still quite small. It is unclear whether the lack of black hole detections in many galaxies implies that these galaxies do not contain black holes; or that their masses are significantly below the value implied by the M

relation; or that the data are simply too poor to reveal the presence of the black hole .

The smallest supermassive black hole with a well-determined mass has M≈106 solar masses (see figure). The existence of black holes in the mass range

relation in low-mass galaxies, and the existence of intermediate mass black holes has been reasonably well established in a number of galaxies which contain active galactic nuclei, although the values of M in these galaxies are highly uncertain .
No clear evidence has been found for ultra-massive black holes with masses above 1010 solar masses, although this may be an expected consequence of the observed upper limit to