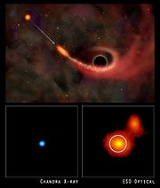 Overview
A supermassive black hole is the largest type of black hole
Black hole
A black hole is a region of spacetime from which nothing, not even light, can escape. The theory of general relativity predicts that a sufficiently compact mass will deform spacetime to form a black hole. Around a black hole there is a mathematically defined surface called an event horizon that...
in a galaxy, in the order of hundreds of thousands to billions of solar masses. Most, and possibly all galaxies, including the Milky Way
Milky Way
The Milky Way is the galaxy that contains the Solar System. This name derives from its appearance as a dim un-resolved "milky" glowing band arching across the night sky...
, are believed to contain supermassive black holes at their centers
Galactic Center
The Galactic Center is the rotational center of the Milky Way galaxy. It is located at a distance of 8.33±0.35 kpc from the Earth in the direction of the constellations Sagittarius, Ophiuchus, and Scorpius where the Milky Way appears brightest...
.

Supermassive black holes have properties which distinguish them from lower-mass classifications:

Black hole. door way to the next universe our not...
More
x