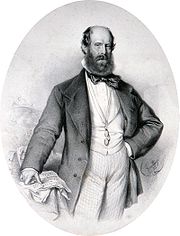 Luigi Ricci was an Italian
Italy
Italy , officially the Italian Republic languages]] under the European Charter for Regional or Minority Languages. In each of these, Italy's official name is as follows:;;;;;;;;), is a unitary parliamentary republic in South-Central Europe. To the north it borders France, Switzerland, Austria and...
composer, particularly of opera
Opera
Opera is an art form in which singers and musicians perform a dramatic work combining text and musical score, usually in a theatrical setting. Opera incorporates many of the elements of spoken theatre, such as acting, scenery, and costumes and sometimes includes dance...
s.
He was the elder brother of Federico Ricci
Federico Ricci
Federico Ricci , was an Italian composer, particularly of operas.Born in Naples, he was the younger brother of Luigi Ricci, with whom he collaborated on several works....
, with whom he collaborated on several works.

Ricci born and educated in Naples
Naples
Naples is a city in Southern Italy, situated on the country's west coast by the Gulf of Naples. Lying between two notable volcanic regions, Mount Vesuvius and the Phlegraean Fields, it is the capital of the region of Campania and of the province of Naples...
, where he wrote his first opera at the conservatory in 1823. His triumphs in 1831 at La Scala
La Scala
La Scala , is a world renowned opera house in Milan, Italy. The theatre was inaugurated on 3 August 1778 and was originally known as the New Royal-Ducal Theatre at La Scala...
with Chiara di Rosembergh and in 1834 with Un'avventura di Scaramuccia made him famous throughout Europe, and in 1835 he and his younger brother Federico
Federico Ricci
Federico Ricci , was an Italian composer, particularly of operas.Born in Naples, he was the younger brother of Luigi Ricci, with whom he collaborated on several works....
collaborated in the first of the four operas they wrote together.

In 1837 Ricci ran into financial problems, brought about mainly by his extravagant life-style. He was forced to accept a job at Trieste
Trieste
Trieste is a city and seaport in northeastern Italy. It is situated towards the end of a narrow strip of land lying between the Adriatic Sea and Italy's border with Slovenia, which lies almost immediately south and east of the city...
, and he composed no operas for seven years. Then, however, he fell in love, at the same time, with both Francesca and Ludmila, the 17-year-old identical twin sisters of the singer Teresa Stolz
Teresa Stolz
Teresa Stolz was a Bohemian soprano, long resident in Italy, who was associated with significant premieres of the works of Giuseppe Verdi, and may have been his mistress...
, and this inspired him to create (in 1845) an opera for them both to sing in, at Odessa
Odessa
Odessa or Odesa is the administrative center of the Odessa Oblast located in southern Ukraine. The city is a major seaport located on the northwest shore of the Black Sea and the fourth largest city in Ukraine with a population of 1,029,000 .The predecessor of Odessa, a small Tatar settlement,...
. Back in Trieste he married Ludmila (without, however, letting go of the other). He then composed three more operas on his own, which were well received, although his greatest success of these years was actually Crispino e la comare
Crispino e la comare
Crispino e la comare is an opera by Luigi Ricci and Federico Ricci with an Italian libretto by Francesco Maria Piave.-Performance history:The premiere took place on 28 February 1850 at the Teatro San Benedetto in Venice....
, his last collaboration with his brother, of which he wrote the greater part.

Comedy was Ricci's strong suit, and though not quite reaching the level of Donizetti
Gaetano Donizetti
Domenico Gaetano Maria Donizetti was an Italian composer from Bergamo, Lombardy. His best-known works are the operas L'elisir d'amore , Lucia di Lammermoor , and Don Pasquale , all in Italian, and the French operas La favorite and La fille du régiment...
(whom he himself greatly admired), Crispino is generally considered one of the best Italian comic operas of the period.

In 1859, shortly after the production of his last opera, Ricci succumbed to mental illness, and he ended his life in a hospital in Prague
Prague
Prague is the capital and largest city of the Czech Republic. Situated in the north-west of the country on the Vltava river, the city is home to about 1.3 million people, while its metropolitan area is estimated to have a population of over 2.3 million...
.