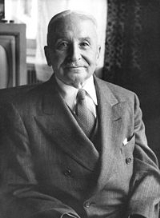 Overview
Ludwig Heinrich Edler
Edler
Edler was until 1919 the lowest title of nobility in Austria-Hungary and Germany, just beneath a Ritter, but above nobles without title who used only the preposition von before their surname. It was mostly given to civil servants and military officers, as well as those upon whom the second rank of...
von Mises (ˈluːtvɪç fɔn ˈmiːzəs; September 29, 1881 – October 10, 1973) was an Austrian economist
Economics
Economics is the social science that analyzes the production, distribution, and consumption of goods and services. The term economics comes from the Ancient Greek from + , hence "rules of the house"...
, philosopher, and classical liberal
Classical liberalism
Classical liberalism is the philosophy committed to the ideal of limited government, constitutionalism, rule of law, due process, and liberty of individuals including freedom of religion, speech, press, assembly, and free markets....
who had a significant influence on the modern Libertarian
Libertarianism
Libertarianism, in the strictest sense, is the political philosophy that holds individual liberty as the basic moral principle of society. In the broadest sense, it is any political philosophy which approximates this view...
movement and the "Austrian School
Austrian School
The Austrian School of economics is a heterodox school of economic thought. It advocates methodological individualism in interpreting economic developments , the theory that money is non-neutral, the theory that the capital structure of economies consists of heterogeneous goods that have...
" of economic thought.

If one rejects laissez faire on account of man's fallibility and moral weakness, one must for the same reason also reject every kind of government action.

The main political problem is how to prevent the police power from becoming tyrannical. This is the meaning of all the struggles for liberty.

The philosophy called individualism is a philosophy of social cooperation and the progressive intensification of the social nexus.

The meaning of economic freedom is this: that the individual is in a position to choose the way in which he wants to integrate himself into the totality of society.

The goal of liberalism is the peaceful cooperation of all men. It aims at peace among nations too. When there is private ownership of the means of production everywhere and when laws, the tribunals and the administration treat foreigners and citizens on equal terms, it is of little importance where a country's frontiers are drawn. ... War no longer pays; there is no motive for aggression. ... All nations can coexist peacefully...

If history could teach us anything, it would be that private property is inextricably linked with civilization.

No wonder that all who have had something new to offer humanity have had nothing good to say of the state or its laws.

This, then, is freedom in the external life of man — that he is independent of the arbitrary power of his fellows.