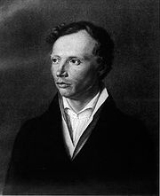 Encyclopedia
Johann Ludwig Uhland was a German
Germans
The Germans are a Germanic ethnic group native to Central Europe. The English term Germans has referred to the German-speaking population of the Holy Roman Empire since the Late Middle Ages....
poet
Poet
A poet is a person who writes poetry. A poet's work can be literal, meaning that his work is derived from a specific event, or metaphorical, meaning that his work can take on many meanings and forms. Poets have existed since antiquity, in nearly all languages, and have produced works that vary...
, philologist and literary historian.

He was born in Tübingen
Tübingen
Tübingen is a traditional university town in central Baden-Württemberg, Germany. It is situated south of the state capital, Stuttgart, on a ridge between the Neckar and Ammer rivers.-Geography:...
, then Duchy of Württemberg, and studied jurisprudence at the university there, but also took an interest in medieval literature, especially old German and French poetry. Having graduated as a doctor of laws in 1810, he went to Paris
Paris
Paris is the capital and largest city in France, situated on the river Seine, in northern France, at the heart of the Île-de-France region...
for eight months to continue his studies of poetry; and from 1812 to 1814 he worked as a lawyer in Stuttgart
Stuttgart
Stuttgart is the capital of the state of Baden-Württemberg in southern Germany. The sixth-largest city in Germany, Stuttgart has a population of 600,038 while the metropolitan area has a population of 5.3 million ....
, in the bureau of the minister of justice.

He had begun his career as a poet in 1807 and 1808 by contributing ballads and lyrics to Seckendorff's Musenalmanach; and in 1812 and 1813 he wrote poems for Kerner's Poetischer Almanach and Deutscher Dichterwald. In 1815 he collected his poems in a volume entitled Vaterländische Gedichte, which almost immediately secured a wide circle of readers. To almost every new edition he added some fresh poems. His two dramatic works Ernst, Herzog von Schwaben (1818) and Ludwig der Baier (1819) are unimportant in comparison with his Gedichte.

As a lyric poet, Uhland must be classed with the writers of the romantic
Romanticism
Romanticism was an artistic, literary and intellectual movement that originated in the second half of the 18th century in Europe, and gained strength in reaction to the Industrial Revolution...
school. Like them, he found in the Middle Ages the subjects which appealed most strongly to his imagination. Yet his style has a precision, suppleness and grace which distinguish his most characteristic writings from those of the romantics. Uhland wrote poems in defense of freedom, and in the states assembly of Württemberg
Württemberg
Württemberg , formerly known as Wirtemberg or Wurtemberg, is an area and a former state in southwestern Germany, including parts of the regions Swabia and Franconia....
he played a distinguished part as one of the most vigorous and consistent of the liberal members.

When in 1815 Württemberg
Württemberg
Württemberg , formerly known as Wirtemberg or Wurtemberg, is an area and a former state in southwestern Germany, including parts of the regions Swabia and Franconia....
was to be granted a new constitution, his lyrics in praise of liberty were received with enthusiasm. As a member of the legislature from 1819 to 1826, he sided with the opposition.

In 1829 he was made honorary professor of German literature
German literature
German literature comprises those literary texts written in the German language. This includes literature written in Germany, Austria, the German part of Switzerland, and to a lesser extent works of the German diaspora. German literature of the modern period is mostly in Standard German, but there...
at the University of Tübingen
Eberhard Karls University of Tübingen
Eberhard Karls University, Tübingen is a public university located in the city of Tübingen, Baden-Württemberg, Germany. It is one of Germany's oldest universities, internationally noted in medicine, natural sciences and the humanities. In the area of German Studies it has been ranked first among...
, but he resigned in 1833, when the post was found to be incompatible with his political views. In 1848 he became a member of the Frankfurt Parliament
Frankfurt Parliament
The Frankfurt Assembly was the first freely elected parliament for all of Germany. Session was held from May 18, 1848 to May 31, 1849 in the Paulskirche at Frankfurt am Main...
that convened in the course of the 1848 revolution.

As a Germanic and Romance philologist, Uhland must be counted among the founders of that science. Besides the treatise Ueber das altfranzösische Epos (1812) and an essay Zur Geschichte der Freischiessen (1828), there are to be especially mentioned Walther von der Vogelweide, ein altdeutscher Dichter (1822); Der Mythus von Thôr (1836), the result of the most painstaking original investigation; and the masterly collection Alte hoch- und niederdeutsche Volkslieder (1844–45; 3d ed. 1892). His poetical works were repeatedly published as Gedichte und Dramen, while his scientific work is embodied in Schriften zur Geschichte der Dichtung und Sage, edited by Holland, Keller, and Pfeiffer (1865–72).

He died on 13 November 1862 in Tübingen
Tübingen
Tübingen is a traditional university town in central Baden-Württemberg, Germany. It is situated south of the state capital, Stuttgart, on a ridge between the Neckar and Ammer rivers.-Geography:...
.