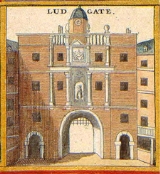 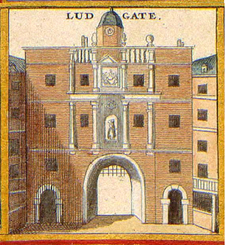 Ludgate was the westernmost gate in London Wall
London Wall
London Wall was the defensive wall first built by the Romans around Londinium, their strategically important port town on the River Thames in what is now the United Kingdom, and subsequently maintained until the 18th century. It is now the name of a road in the City of London running along part of...
. The name survives in Ludgate Hill
Ludgate Hill
Ludgate Hill is a hill in the City of London, near the old Ludgate, a gate to the City that was taken down, with its attached gaol, in 1780. Ludgate Hill is the site of St Paul's Cathedral, traditionally said to have been the site of a Roman temple of the goddess Diana. It is one of the three...
, an eastward continuation of Fleet Street
Fleet Street
Fleet Street is a street in central London, United Kingdom, named after the River Fleet, a stream that now flows underground. It was the home of the British press until the 1980s...
, and Ludgate Circus
Ludgate Circus
Ludgate Circus is a location in the City of London at the intersection of Farringdon Street / New Bridge Street with Fleet Street/Ludgate Hill....
.

Ludgate is generally accepted to derive from the Old English term "hlid-geat" from "hlid" ("lid, cover, opening, gate") and "geat" or "gæt" ("gate, opening, passage") and was a common Old English compound meaning "postern
Postern
A postern is a secondary door or gate, particularly in a fortification such as a city wall or castle curtain wall. Posterns were often located in a concealed location, allowing the occupants to come and go inconspicuously. In the event of a siege, a postern could act as a sally port, allowing...
" or "swing gate" and surivives in various place-names across England
England
England is a country that is part of the United Kingdom. It shares land borders with Scotland to the north and Wales to the west; the Irish Sea is to the north west, the Celtic Sea to the south west, with the North Sea to the east and the English Channel to the south separating it from continental...
as well as in surnames
Ludgate (surname)
Ludgate is a surname, and may refer to:* Percy Ludgate , Irish engineer* William Ludgate , United States Army soldier* April Ludgate, Parks and Recreation character played by Aubrey Plaza...
.

The Romans
Roman Empire
The Roman Empire was the post-Republican period of the ancient Roman civilization, characterised by an autocratic form of government and large territorial holdings in Europe and around the Mediterranean....
built a road along the north bank of the River Thames
River Thames
The River Thames flows through southern England. It is the longest river entirely in England and the second longest in the United Kingdom. While it is best known because its lower reaches flow through central London, the river flows alongside several other towns and cities, including Oxford,...
westwards through the gate later called Lud Gate as part of the fortifications of London
Fortifications of London
The fortifications of London are extensive and mostly well maintained, though many of the City of London's fortifications and defences were dismantled in the 17th and 18th century...
. Guarding the road from the west, it led to the Romans' main burial ground in what is now Fleet Street. The gate stood just above a crossing of the Fleet River (this now runs underground). It stood almost opposite what is now St Martin's Church on what is now called Ludgate Hill. The site of the gate is marked by a plaque on the north side of Ludgate Hill, halfway between Ludgate Circus
Ludgate Circus
Ludgate Circus is a location in the City of London at the intersection of Farringdon Street / New Bridge Street with Fleet Street/Ludgate Hill....
and St Paul's Cathedral
St Paul's Cathedral
St Paul's Cathedral, London, is a Church of England cathedral and seat of the Bishop of London. Its dedication to Paul the Apostle dates back to the original church on this site, founded in AD 604. St Paul's sits at the top of Ludgate Hill, the highest point in the City of London, and is the mother...
.

Rebuilt in 1215, the rooms above the gate became used as a prison
Prison
A prison is a place in which people are physically confined and, usually, deprived of a range of personal freedoms. Imprisonment or incarceration is a legal penalty that may be imposed by the state for the commission of a crime...
for petty offenders. The gate was one of three separate sites that bore the name Ludgate Prison. In 1378 it was decided that Newgate Prison
Newgate Prison
Newgate Prison was a prison in London, at the corner of Newgate Street and Old Bailey just inside the City of London. It was originally located at the site of a gate in the Roman London Wall. The gate/prison was rebuilt in the 12th century, and demolished in 1777...
would be used for serious criminals, and Ludgate for Freemen
Freedom of the City
Freedom of the City is an honour bestowed by some municipalities in Australia, Canada, Ireland, France, Italy, New Zealand, South Africa, Spain, the United Kingdom, Gibraltar and Rhodesia to esteemed members of its community and to organisations to be honoured, often for service to the community;...
of the City and clergy
Clergy
Clergy is the generic term used to describe the formal religious leadership within a given religion. A clergyman, churchman or cleric is a member of the clergy, especially one who is a priest, preacher, pastor, or other religious professional....
who were imprisoned for minor offences such as debt. By 1419 it became clear that prisoners were far too comfortable here, as they were more likely to want to stay than to pay their debts and leave. They were all transferred to Newgate prison for this reason, although that prison was so overcrowded and unhealthy that they soon returned. It had a flat lead roof for prisoners to exercise on, as well as a 'large walking place' at ground level. The gate was rebuilt about 1450 by a man called Foster who at one time was lodged in the Debtor's Prison over the gate. He eventually became Sir Stephen Foster, Lord Mayor of London
Lord Mayor of London
The Right Honourable Lord Mayor of London is the legal title for the Mayor of the City of London Corporation. The Lord Mayor of London is to be distinguished from the Mayor of London; the former is an officer only of the City of London, while the Mayor of London is the Mayor of Greater London and...
. He rebuilt Lud Gate and the Debtor's Prison and remembering his own sufferings abolished the practice of making the debtors pay for their own food and lodging.

Rebuilt by the City in 1586, a statue of King Lud was placed on the east side, and one of Queen Elizabeth I on the west. These statues are now outside St Dunstan's Church
St Dunstan-in-the-West
The Guild Church of St Dunstan-in-the-West is in Fleet Street in London, England. An octagonal-shaped building, it is dedicated to a former bishop of London and archbishop of Canterbury.-History:...
, Fleet Street. It was rebuilt again after being destroyed in the Great Fire
Great Fire of London
The Great Fire of London was a major conflagration that swept through the central parts of the English city of London, from Sunday, 2 September to Wednesday, 5 September 1666. The fire gutted the medieval City of London inside the old Roman City Wall...
. Like the other City gates it was demolished in 1760. The prisoners were moved to a section of the workhouse in Bishopsgate
Bishopsgate
Bishopsgate is a road and ward in the northeast part of the City of London, extending north from Gracechurch Street to Norton Folgate. It is named after one of the original seven gates in London Wall...
Street.

Ludgate is mentioned in Geoffrey of Monmouth
Geoffrey of Monmouth
Geoffrey of Monmouth was a cleric and one of the major figures in the development of British historiography and the popularity of tales of King Arthur...
's Historia Regum Britanniae
Historia Regum Britanniae
The Historia Regum Britanniae is a pseudohistorical account of British history, written c. 1136 by Geoffrey of Monmouth. It chronicles the lives of the kings of the Britons in a chronological narrative spanning a time of two thousand years, beginning with the Trojans founding the British nation...
, written around 1136. According to the pseudohistorical work the name comes from the mythic Welsh King Lud son of Heli
Lud son of Heli
Lud , according to Geoffrey of Monmouth's legendary History of the Kings of Britain and related medieval texts, was a king of Britain in pre-Roman times. He was the eldest son of Geoffrey's King Heli, and succeeded his father to the throne. He was succeeded, in turn, by his brother Cassibelanus...
whom he claims also gave his name to London
London
London is the capital city of :England and the :United Kingdom, the largest metropolitan area in the United Kingdom, and the largest urban zone in the European Union by most measures. Located on the River Thames, London has been a major settlement for two millennia, its history going back to its...
.

"The Cronycullys of Englonde" tell us of an early king of Britain: "he lete make a fayre gate and called hit Lud Gate after his name" in 66 BC, but it is more likely that the Romans were the first to build it, and that it is simply named after him. One proposed derivation, entirely prosaic, is that the name is a variation on Fleodgaet ie 'Fleet-gate'.