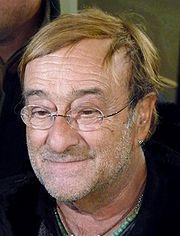 Lucio Dalla is a popular Italian
Italy
Italy , officially the Italian Republic languages]] under the European Charter for Regional or Minority Languages. In each of these, Italy's official name is as follows:;;;;;;;;), is a unitary parliamentary republic in South-Central Europe. To the north it borders France, Switzerland, Austria and...
singer-songwriter
Singer-songwriter
Singer-songwriters are musicians who write, compose and sing their own musical material including lyrics and melodies. As opposed to contemporary popular music singers who write their own songs, the term singer-songwriter describes a distinct form of artistry, closely associated with the...
and musician. He also plays clarinet
Clarinet
The clarinet is a musical instrument of woodwind type. The name derives from adding the suffix -et to the Italian word clarino , as the first clarinets had a strident tone similar to that of a trumpet. The instrument has an approximately cylindrical bore, and uses a single reed...
and keyboards
Keyboard instrument
A keyboard instrument is a musical instrument which is played using a musical keyboard. The most common of these is the piano. Other widely used keyboard instruments include organs of various types as well as other mechanical, electromechanical and electronic instruments...
.

He is the composer of Caruso
Caruso (song)
"Caruso" by Italian singer-songwriter Lucio Dalla in 1986. It is dedicated to Enrico Caruso, an Italian tenor.-Unclear meaning of the song:Controversially, the song simply tells about the pains and longings of a man who is about to die while he is looking in the eyes of a girl who was very dear to...
(1986), which has been covered by numerous international artists. A version of Caruso sung by Luciano Pavarotti
Luciano Pavarotti
right|thumb|Luciano Pavarotti performing at the opening of the Constantine Palace in [[Strelna]], 31 May 2003. The concert was part of the celebrations for the 300th anniversary of [[St...
sold over 9 million copies, and another version was a track on Andrea Bocelli
Andrea Bocelli
Andrea Bocelli, is an Italian tenor, multi-instrumentalist and classical crossover artist. Born with poor eyesight, he became blind at the age of twelve following a soccer accident....
's first international album Romanza, which later sold over 16 million copies worldwide. This piece is also on Josh Groban
Josh Groban
Joshua Winslow "Josh" Groban is an American singer-songwriter, musician, actor, and record producer. His four solo albums have been certified at least multi-platinum, and in 2007, he was charted as the number-one best selling artist in the United States with over 21 million records in that country...
's album "Closer", which sold over 5 million copies in the United States alone. The song is a tribute to the emblematic opera tenor Enrico Caruso.

He began to play the clarinet
Clarinet
The clarinet is a musical instrument of woodwind type. The name derives from adding the suffix -et to the Italian word clarino , as the first clarinets had a strident tone similar to that of a trumpet. The instrument has an approximately cylindrical bore, and uses a single reed...
at an early age, in a jazz
Jazz
Jazz is a musical style that originated at the beginning of the 20th century in African American communities in the Southern United States. It was born out of a mix of African and European music traditions. From its early development until the present, jazz has incorporated music from 19th and 20th...
band in Rome
Rome
Rome is the capital of Italy and the country's largest and most populated city and comune, with over 2.7 million residents in . The city is located in the central-western portion of the Italian Peninsula, on the Tiber River within the Lazio region of Italy.Rome's history spans two and a half...
. The singer-songwriter Gino Paoli
Gino Paoli
Gino Paoli is an Italian singer-songwriter. He wrote four masterpieces of Italian popular music: "Il cielo in una stanza", "Che cosa c'è", "Senza fine" and "Sapore di sale".- Biography :...
noticed Dalla's vocal qualities and suggested he attempt a solo career as an Italian soul singer. However, Dalla's debut at the Cantagiro
Cantagiro
Cantagiro was an Italian summer festival held from 1962 to 1972 and 1990 to 1993. It had three categories, A for famous artists, B for newcomers and C for groups. The "Father" of the competition was Ezio Radaelli.- Cantagiro :-Nuovo Cantagiro:...
festival in 1965 was unsuccessful probably due to his appearance and to his music, which was considered too experimental for the time. His first album, 1999, was released the following year. His next album, Terra di Gaibola (from the name of a suburb of Bologna), was released in 1970 and contained some early Dalla classics.

His first hit was "4 Marzo 1943", which garnered some success at the Sanremo Festival. Regardless of its title, the song became popularly known as "Gesù bambino". Also successful was "Piazza grande", which Dalla would sing again at Sanremo.

At this point, Dalla made a decisive move in his career, starting a collaboration with the Bolognese poet Roberto Roversi. Roversi wrote the lyrics to Dalla's next three albums Il giorno aveva cinque teste (The Day Had Five Heads) (1973), Anidride solforosa (1975) and Automobili (Automobiles) (1976) Although these albums did not sell in large numbers, they were noted by critics for the unusual mix of Roversi's weird lyrics with Dalla's improvisatory, and sometimes experimental, compositional abilities.

The duo had already broken up by the time the concept album Automobili was released. Roversi, who had been against the album's release, chose the pseudonym "Norisso" when it was time to register the songs. The album, however, included one of Dalla's most popular songs, "Nuvolari
Tazio Nuvolari
Tazio Giorgio Nuvolari was an Italian motorcycle and racecar driver, known as Il Mantovano Volante or Nivola. He was the 1932 European Champion in Grand Prix motor racing...
", named after the famous 1930s Italian racer.

Affected by the end of the collaboration, Dalla decided to write the lyrics of his next albums himself. This decision proved to be surprisingly good, and he soon emerged as one of the most intelligent and musically cultured of the Italian singer-songwriters. The first album of this new phase was Com'è profondo il mare (1977), in which Dalla was accompanied by some members of the future pop band Stadio. The title track or "Quale allegria" are today ranked among the best Italian songs.

Dalla's poetic inspiration was confirmed by the following albums, all entitled Lucio Dalla or Dalla and all best-sellers. They contain classics like "Anna e Marco", "L'anno che verrà", "Futura", and "Cara".

He was invited for duetting on Pavarotti and friends, singing his own hit "Caruso" with Luciano Pavarotti.