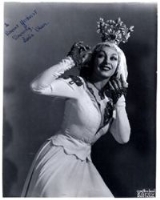 She created the Eldest Sister in Tudor's Pillar of Fire (1942) and the Greedy One in Agnes de Mille
Agnes de Mille
Agnes George de Mille was an American dancer and choreographer.-Early years:Agnes de Mille was born in New York City into a well-connected family of theater professionals. Her father William C. deMille and her uncle Cecil B. DeMille were both Hollywood directors...
's Three Virgins and a Devil (1941). In 1945 she and Oliver Smith
Oliver Smith (designer)
Oliver Smith was an American scenic designer.Born in Waupun, Wisconsin, Smith attended Penn State, after which he moved to New York City and began to form friendships that blossomed into working relationships with such talents as Leonard Bernstein, Jerome Robbins, Carson McCullers, and Agnes de...
jointly took over direction of American Ballet Theatre
American Ballet Theatre
American Ballet Theatre , based in New York City, was one of the foremost ballet companies of the 20th century. It continues as a leading dance company in the world today...
.

She retired from the stage in 1960, and retired as company director in 1980, when she was succeeded by Mikhail Baryshnikov
Mikhail Baryshnikov
Mikhail Nikolaevich Baryshnikov is a Soviet and American dancer, choreographer, and actor, often cited alongside Vaslav Nijinsky and Rudolf Nureyev as one of the greatest ballet dancers of the 20th century. After a promising start in the Kirov Ballet in Leningrad, he defected to Canada in 1974...
.

During the course of forty years she devoted her energy and a large part of her personal fortune to ensure the company's survival. She brought Tudor and Baryshnikov to American Ballet Theater and encouraged US choreographers such as Jerome Robbins
Jerome Robbins
Jerome Robbins was an American theater producer, director, and choreographer known primarily for Broadway Theater and Ballet/Dance, but who also occasionally directed films and directed/produced for television. His work has included everything from classical ballet to contemporary musical theater...
, Walter Tetley
Walter Tetley
Walter Tetley , an American voice actor, was a child impersonator in radio's classic era, with regular roles on The Great Gildersleeve and The Phil Harris-Alice Faye Show, as well as continuing as a voice-over artist in animated cartoons, commercials, and spoken-word record albums...
and Twyla Tharp
Twyla Tharp
Twyla Tharp is an American dancer and choreographer, who lives and works in New York City.-Early years:Tharp was born in 1941 on a farm in Portland, Indiana, and was named after Twila Thornburg, the "Pig Princess" of the 89th Annual Muncie Fair in Indiana.she spend hours working on it to help her...
. She was awarded the US Presidential Medal of Freedom
Presidential Medal of Freedom
The Presidential Medal of Freedom is an award bestowed by the President of the United States and is—along with thecomparable Congressional Gold Medal bestowed by an act of U.S. Congress—the highest civilian award in the United States...
in 1980.

In private life she was Mrs Thomas Ewing, with whom she had two sons.