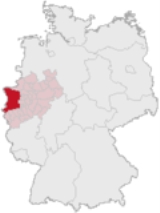 The Lower Rhine region or Niederrhein is a region around the Lower Rhine
Lower Rhine
The Lower Rhine flows from Bonn, Germany, to the North Sea at Hoek van Holland, Netherlands.Almost immediately after entering the Netherlands, the Rhine splits into many branches. The main branch is called the Waal which flows from Nijmegen to meet the river Meuse; after which it is called Merwede...
section of the river Rhine in North-Rhine Westphalia, Germany
Germany
Germany , officially the Federal Republic of Germany , is a federal parliamentary republic in Europe. The country consists of 16 states while the capital and largest city is Berlin. Germany covers an area of 357,021 km2 and has a largely temperate seasonal climate...
between approximately Neuss
Neuss
Neuss is a city in North Rhine-Westphalia, Germany. It is located on the west bank of the Rhine opposite Düsseldorf. Neuss is the largest city within the Rhein-Kreis Neuss district and owes its prosperity to its location at the crossing of historic and modern trade routes. It is primarily known...
and Düsseldorf
Düsseldorf
Düsseldorf is the capital city of the German state of North Rhine-Westphalia and centre of the Rhine-Ruhr metropolitan region.Düsseldorf is an important international business and financial centre and renowned for its fashion and trade fairs. Located centrally within the European Megalopolis, the...
in the South and the Dutch
Netherlands
The Netherlands is a constituent country of the Kingdom of the Netherlands, located mainly in North-West Europe and with several islands in the Caribbean. Mainland Netherlands borders the North Sea to the north and west, Belgium to the south, and Germany to the east, and shares maritime borders...
border around Emmerich in the North. As the region can be defined either geographically, linguistically, culturally, or by political, economic and traffic relations throughout the centuries, as well as by more recent political subdivisions, its precise borders are disputable and occasionally may be seen as extending beyond the Dutch border. Yet, while the Dutch half of the Lower Rhine geographic area is called Nederrijn
Nederrijn
thumb|left|300px|Course of the NederrijnNederrijn is the name of the Dutch part of the River Rhine from the confluence at the town of Angeren of the cut-off Rhine bend of Oude Rijn and the Pannerdens Kanaal...
in Dutch, it does practically not overlap with the German Niederrhein
Niederrhein
Niederrhein could refer to:* The northernmost German section of the river Rhine, see: Lower Rhine * The Lower Rhine region* Airport Weeze, also known as Airport Niederrhein*Niederrhein , a song by Austrian musician Herwig Mitteregger...
region, although one term is the translation of the other.

A cultural bond of the German Lower Rhine region is its Low Rhenish language, which belongs to the Cleves languages of the Rhine-Maaslands language group. Other typicalities of the area include the predominantly Catholic background as well as the Rhenish Carnival
Carnival
Carnaval is a festive season which occurs immediately before Lent; the main events are usually during February. Carnaval typically involves a public celebration or parade combining some elements of a circus, mask and public street party...
tradition.

The Lower Rhine region's landscape is mostly flat green grass land with wide views of the horizon. Sights include the historic town centers of Cleves and Xanten
Xanten
Xanten is a historic town in the North Rhine-Westphalia state of Germany, located in the district of Wesel.Xanten is known for the Archaeological Park or archaeological open air museum , its medieval picturesque city centre with Xanten Cathedral and many museums, its large man-made lake for...
, as well as the latter town's Roman archeological museum, the castle "Schloss Moyland
Moyland Castle
Moyland Castle is a moated castle in Bedburg-Hau in the district of Kleve , one of the most important neo-Gothic buildings in North Rhine-Westphalia. Its name derives from the Dutch word Moiland which means "beautiful country"...
" in Bedburg-Hau
Bedburg-Hau
Bedburg-Hau is a municipality in the district of Cleves in the state of North Rhine-Westphalia, Germany. It is located approx. 5 km south-east of Cleves....
or the Catholic pilgrimage town of Kevelaer
Kevelaer
Kevelaer is a municipality in the district of Kleve, in North Rhine-Westphalia in Germany. It is the best visited Catholic pilgrimage location within north-western Europe. More than 800,000 pilgrims, mostly from Germany and the Netherlands, visit Kevelaer every year to honour the Virgin Mary.The...
.