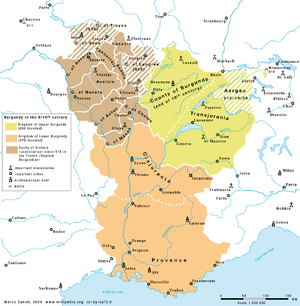 Lower Burgundy was a historical kingdom in what is now southeastern France
France
The French Republic , The French Republic , The French Republic , (commonly known as France , is a unitary semi-presidential republic in Western Europe with several overseas territories and islands located on other continents and in the Indian, Pacific, and Atlantic oceans. Metropolitan France...
, so-called because it was lower down the Rhone Valley than Upper Burgundy
Upper Burgundy
Upper Burgundy is the part of Burgundy east of the Jura mountains, that together with the western County of Burgundy from 868 formed the Kingdom of Upper Burgundy, encompassing both sides of the Jura mountains range...
. Lower Burgundy is sometimes called the Kingdom of Arelat or the Kingdom of Cisjurane Burgundy. The borders of Lower Burgundy were the Mediterranean Sea
Mediterranean Sea
The Mediterranean Sea is a sea connected to the Atlantic Ocean surrounded by the Mediterranean region and almost completely enclosed by land: on the north by Anatolia and Europe, on the south by North Africa, and on the east by the Levant...
to the south, Septimania
Septimania
Septimania was the western region of the Roman province of Gallia Narbonensis that passed under the control of the Visigoths in 462, when Septimania was ceded to their king, Theodoric II. Under the Visigoths it was known as simply Gallia or Narbonensis. It corresponded roughly with the modern...
to the southwest, Aquitaine
Aquitaine
Aquitaine , archaic Guyenne/Guienne , is one of the 27 regions of France, in the south-western part of metropolitan France, along the Atlantic Ocean and the Pyrenees mountain range on the border with Spain. It comprises the 5 departments of Dordogne, :Lot et Garonne, :Pyrénées-Atlantiques, Landes...
to the west, the Kingdom of Upper Burgundy to the north, and the Kingdom of Italy to the east.

Lower Burgundy was founded by Boso, Count of Arles in 879, following the death of the West Frankish King Louis the Stammerer
Louis the Stammerer
Louis the Stammerer was the King of Aquitaine and later King of West Francia. He was the eldest son of Charles the Bald and Ermentrude of Orléans. He succeeded his younger brother in Aquitaine in 866 and his father in West Francia in 877, though he was never crowned Emperor...
. Boso was an incompetent ruler and by 882 the kingdom was reintegrated into the West Frankish realm by one of Louis' sons, Carloman. Lower Burgundy passed to Charles the Fat
Charles the Fat
Charles the Fat was the King of Alemannia from 876, King of Italy from 879, western Emperor from 881, King of East Francia from 882, and King of West Francia from 884. In 887, he was deposed in East Francia, Lotharingia, and possibly Italy, where the records are not clear...
in 884 following Carloman's death and in 890, following the revolt of Arnulf of Carinthia
Arnulf of Carinthia
Arnulf of Carinthia was the Carolingian King of East Francia from 887, the disputed King of Italy from 894 and the disputed Holy Roman Emperor from February 22, 896 until his death.-Birth and Illegitimacy:...
and the death of Charles in 888, Boso's son Louis the Blind
Louis the Blind
Louis the Blind was the king of Provence from January 11, 887, King of Italy from October 12, 900, and briefly Holy Roman Emperor, as Louis III, between 901 and 905. He was the son of Boso, the usurper king of Provence, and Ermengard, a daughter of the Emperor Louis II. Through his father, he was...
was crowned King of Lower Burgundy.

Louis the Blind was invited into Italy by Adalbert II of Tuscany
Adalbert II of Tuscany
Adalbert II , called the Rich, son and successor of Adalbert I of Tuscany, and grandson of Boniface II, was much concerned in the troubles of Lombardy, at a time when so many princes were contending for the wrecks of the Carolingian Empire. Before his father died in 884 or 886, he is accredited the...
who wished to keep Berengar of Friuli from gaining control of the Italian peninsula. Louis defeated Berengar and was crowned Holy Roman Emperor
Holy Roman Empire
The Holy Roman Empire was a realm that existed from 962 to 1806 in Central Europe.It was ruled by the Holy Roman Emperor. Its character changed during the Middle Ages and the Early Modern period, when the power of the emperor gradually weakened in favour of the princes...
by Pope Benedict IV
Pope Benedict IV
Pope Benedict IV was Pope from 900 to 903. He was the son of Mammalus, a native of Rome. The tenth-century historian Frodoard, who nicknamed him the Great, commended his noble birth and public generosity...
. Berengar defeated Louis the next year, forced him to flee Italy and promise to never return. In 905, Louis again invaded Italy but was defeated and blinded for breaking his oath. Louis lost his titles King of Italy and Holy Roman Emperor to Berengar.

Blinded, Louis had Hugh of Arles, the Count of Provence, be his regent. Hugh was elected King of Italy in 924 during a Civil War, and he spent the next two years ejecting his opponent, King Rudolph II
Rudolph II of Burgundy
Rudolph II was king of Upper Burgundy , Lower Burgundy , and Italy . He was the son of Rudolph I, king of Upper Burgundy, and it is presumed that his mother was his father's known wife, Guilla of Provence...
of Upper Burgundy, from Italy. Louis died 928 and was succeeded by Hugh. After failing to expand his power by a marriage to Marozia
Marozia
Marozia, born Maria and also known as Mariuccia or Mariozza , was a Roman noblewoman who was the alleged mistress of Pope Sergius III and was given the unprecedented titles senatrix and patricia of Rome by Pope John X.Edward Gibbon wrote of her that the "influence of two sister prostitutes,...
(the effective ruler of Rome
Rome
Rome is the capital of Italy and the country's largest and most populated city and comune, with over 2.7 million residents in . The city is located in the central-western portion of the Italian Peninsula, on the Tiber River within the Lazio region of Italy.Rome's history spans two and a half...
), Hugh spent the next five years of his reign fighting Magyar raids and Andalusian
Al-Andalus
Al-Andalus was the Arabic name given to a nation and territorial region also commonly referred to as Moorish Iberia. The name describes parts of the Iberian Peninsula and Septimania governed by Muslims , at various times in the period between 711 and 1492, although the territorial boundaries...
pirates. In 933, Hugh made peace with Rudolph of Upper Burgundy by giving him the Kingdom of Lower Burgundy, and the two Burgundies were combined into the Kingdom of Arles
Kingdom of Arles
The Kingdom of Arles or Second Kingdom of Burgundy of the High Middle Ages was a Frankish dominion established in 933 from lands of the early medieval Kingdom of Burgundy at Arles...
The source of this article is wikipedia, the free encyclopedia.  The text of this article is licensed under the GFDL.