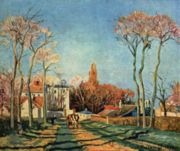 Louveciennes was frequented by impressionist painters
Impressionism
Impressionism was a 19th-century art movement that originated with a group of Paris-based artists whose independent exhibitions brought them to prominence during the 1870s and 1880s...
in the 19th century; according to the official site, there are over 120 paintings by Renoir
Pierre-Auguste Renoir
Pierre-Auguste Renoir was a French artist who was a leading painter in the development of the Impressionist style. As a celebrator of beauty, and especially feminine sensuality, it has been said that "Renoir is the final representative of a tradition which runs directly from Rubens to...
, Pissarro
Camille Pissarro
Camille Pissarro was a French Impressionist and Neo-Impressionist painter born on the island of St Thomas . His importance resides in his contributions to both Impressionism and Post-Impressionism, as he was the only artist to exhibit in both forms...
, Sisley
Alfred Sisley
Alfred Sisley was an Impressionist landscape painter who was born and spent most of his life, in France, but retained British citizenship. He was the most consistent of the Impressionists in his dedication to painting landscape en plein air...
, and Monet
Claude Monet
Claude Monet was a founder of French impressionist painting, and the most consistent and prolific practitioner of the movement's philosophy of expressing one's perceptions before nature, especially as applied to plein-air landscape painting. . Retrieved 6 January 2007...
depicting Louveciennes.

Louis, 7th duc de Broglie
Louis, 7th duc de Broglie
Louis-Victor-Pierre-Raymond, 7th duc de Broglie, FRS was a French physicist and a Nobel laureate in the year 1929. He was the sixteenth member elected to occupy seat 1 of the Académie française in 1944, and served as Perpetual Secretary of the Académie des sciences, France.-Biography :Louis de...
, physicist
Physicist
A physicist is a scientist who studies or practices physics. Physicists study a wide range of physical phenomena in many branches of physics spanning all length scales: from sub-atomic particles of which all ordinary matter is made to the behavior of the material Universe as a whole...
and Nobel Prize
Nobel Prize
The Nobel Prizes are annual international awards bestowed by Scandinavian committees in recognition of cultural and scientific advances. The will of the Swedish chemist Alfred Nobel, the inventor of dynamite, established the prizes in 1895...
laureate, died in Louveciennes 19 March 1987.

Louveciennes is twinned
Town twinning
Twin towns and sister cities are two of many terms used to describe the cooperative agreements between towns, cities, and even counties in geographically and politically distinct areas to promote cultural and commercial ties.- Terminology :...
with: