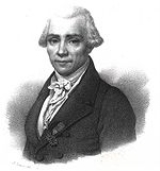 Encyclopedia
Nicolas Louis Vauquelin was a French pharmacist
Pharmacist
Pharmacists are allied health professionals who practice in pharmacy, the field of health sciences focusing on safe and effective medication use...
and chemist
Chemist
A chemist is a scientist trained in the study of chemistry. Chemists study the composition of matter and its properties such as density and acidity. Chemists carefully describe the properties they study in terms of quantities, with detail on the level of molecules and their component atoms...
.

Vauquelin was born at Saint-André-d'Hébertot
Saint-André-d'Hébertot
Saint-André-d'Hébertot is a commune in the Calvados department in the Basse-Normandie region in northwestern France.-Population:-References:*...
in Normandy
Normandy
Normandy is a geographical region corresponding to the former Duchy of Normandy. It is in France.The continental territory covers 30,627 km² and forms the preponderant part of Normandy and roughly 5% of the territory of France. It is divided for administrative purposes into two régions:...
, France. His first acquaintance with chemistry was gained as laboratory assistant to an apothecary in Rouen
Rouen
Rouen , in northern France on the River Seine, is the capital of the Haute-Normandie region and the historic capital city of Normandy. Once one of the largest and most prosperous cities of medieval Europe , it was the seat of the Exchequer of Normandy in the Middle Ages...
(1777–1779), and after various vicissitudes he obtained an introduction to A.F. Fourcroy
Antoine François, comte de Fourcroy
Antoine François, comte de Fourcroy was a French chemist and a contemporary of Antoine Lavoisier. Fourcroy collaborated with Lavoisier, Guyton de Morveau, and Claude Berthollet on the Méthode de nomenclature chimique, a work that helped standardize chemical nomenclature.-Life and work:Fourcroy...
, in whose laboratory he was an assistant from 1783 to 1791.

Moving to Paris, he became a laboratory assistant at the Jardin du Roi and was befriended by a professor of chemistry. In 1791 he was made a member of the Academy of Sciences and from that time he helped to edit the journal Annales de Chimie (Chemical annals), although he left the country for a while during the height of the French Revolution
French Revolution
The French Revolution , sometimes distinguished as the 'Great French Revolution' , was a period of radical social and political upheaval in France and Europe. The absolute monarchy that had ruled France for centuries collapsed in three years...
. In 1798 Vauquelin discovered beryllium
Beryllium
Beryllium is the chemical element with the symbol Be and atomic number 4. It is a divalent element which occurs naturally only in combination with other elements in minerals. Notable gemstones which contain beryllium include beryl and chrysoberyl...
by extracting it from an emerald
Emerald
Emerald is a variety of the mineral beryl colored green by trace amounts of chromium and sometimes vanadium. Beryl has a hardness of 7.5–8 on the 10 point Mohs scale of mineral hardness...
(a beryl
Beryl
The mineral beryl is a beryllium aluminium cyclosilicate with the chemical formula Be3Al26. The hexagonal crystals of beryl may be very small or range to several meters in size. Terminated crystals are relatively rare...
variety) and reducing the beryllium chloride
Beryllium chloride
Beryllium chloride is an inorganic compound with the formula BeCl2. It is a colourless, hygroscopic solid that dissolves well in many polar solvents...
with potassium
Potassium
Potassium is the chemical element with the symbol K and atomic number 19. Elemental potassium is a soft silvery-white alkali metal that oxidizes rapidly in air and is very reactive with water, generating sufficient heat to ignite the hydrogen emitted in the reaction.Potassium and sodium are...
in a platinum crucible.


Contributions to chemistry and discoverer of a chemical element

At first his work appeared as that of his master and patron, then in their joint names; in 1790 he began to publish on his own, and between that year and 1833 his name is associated with 376 papers. Most of these were simple records of patient and laborious analytical operations, and it is perhaps surprising that among all the substances he analysed he only detected two new elements, beryllium
Beryllium
Beryllium is the chemical element with the symbol Be and atomic number 4. It is a divalent element which occurs naturally only in combination with other elements in minerals. Notable gemstones which contain beryllium include beryl and chrysoberyl...
in 1798 in beryl and chromium
Chromium
Chromium is a chemical element which has the symbol Cr and atomic number 24. It is the first element in Group 6. It is a steely-gray, lustrous, hard metal that takes a high polish and has a high melting point. It is also odorless, tasteless, and malleable...
in 1797 in a red lead ore from Siberia
Siberia
Siberia is an extensive region constituting almost all of Northern Asia. Comprising the central and eastern portion of the Russian Federation, it was part of the Soviet Union from its beginning, as its predecessor states, the Tsardom of Russia and the Russian Empire, conquered it during the 16th...
. He also managed to get liquid ammonia
Ammonia
Ammonia is a compound of nitrogen and hydrogen with the formula . It is a colourless gas with a characteristic pungent odour. Ammonia contributes significantly to the nutritional needs of terrestrial organisms by serving as a precursor to food and fertilizers. Ammonia, either directly or...
at atmospheric pressure.

Either together or successively he held the offices of inspector of mines, professor at the School of Mines and at the Polytechnic School, assayer of gold and silver articles, professor of chemistry in the College de France and at the Jardin des Plantes
Jardin des Plantes
The Jardin des Plantes is the main botanical garden in France. It is one of seven departments of the Muséum national d'histoire naturelle. It is situated in the 5ème arrondissement, Paris, on the left bank of the river Seine and covers 28 hectares .- Garden plan :The grounds of the Jardin des...
, member of the Council of Industry and Commerce, commissioner on the pharmacy laws, and finally professor of chemistry to the Medical Faculty, to which he succeeded on Fourcroy's death in 1809. His lectures, which were supplemented with practical laboratory teaching, were attended by many chemists who subsequently attained distinction.

From 1809 he was professor at the University of Paris
University of Paris
The University of Paris was a university located in Paris, France and one of the earliest to be established in Europe. It was founded in the mid 12th century, and officially recognized as a university probably between 1160 and 1250...
. In 1816, he was elected a foreign member of the Royal Swedish Academy of Sciences
Royal Swedish Academy of Sciences
The Royal Swedish Academy of Sciences or Kungliga Vetenskapsakademien is one of the Royal Academies of Sweden. The Academy is an independent, non-governmental scientific organization which acts to promote the sciences, primarily the natural sciences and mathematics.The Academy was founded on 2...
. He was elected to the Chamber of Deputies
Chamber of Deputies
Chamber of deputies is the name given to a legislative body such as the lower house of a bicameral legislature, or can refer to a unicameral legislature.-Description:...
in 1828. In 1806, working with asparagus
Asparagus
Asparagus officinalis is a spring vegetable, a flowering perennialplant species in the genus Asparagus. It was once classified in the lily family, like its Allium cousins, onions and garlic, but the Liliaceae have been split and the onion-like plants are now in the family Amaryllidaceae and...
, he and Pierre Jean Robiquet
Pierre Jean Robiquet
Pierre Jean Robiquet was a French chemist, who laid founding work in identifying amino acids, the fundamental bricks of proteins, through recognizing the first of them, asparagin, in 1806, in the take up of the industry of industrial dyes, with the identification of alizarin in 1826, and in the...
(future discoverer of the famous red dye alizarin
Alizarin
Alizarin or 1,2-dihydroxyanthraquinone is an organic compound with formula that has been used throughout history as a prominent dye, originally derived from the roots of plants of the madder genus.Alizarin was used as a red dye for the English parliamentary "new model" army...
, then a young chemist and his assistant) isolated the amino acid asparagine
Asparagine
Asparagine is one of the 20 most common natural amino acids on Earth. It has carboxamide as the side-chain's functional group. It is not an essential amino acid...
, the first one to be discovered. He also discovered pectin
Pectin
Pectin is a structural heteropolysaccharide contained in the primary cell walls of terrestrial plants. It was first isolated and described in 1825 by Henri Braconnot...
and malic acid
Malic acid
Malic acid is an organic compound with the formula HO2CCH2CHOHCO2H. It is a dicarboxylic acid which is made by all living organisms, contributes to the pleasantly sour taste of fruits, and is used as a food additive. Malic acid has two stereoisomeric forms , though only the L-isomer exists...
in apple
Apple
The apple is the pomaceous fruit of the apple tree, species Malus domestica in the rose family . It is one of the most widely cultivated tree fruits, and the most widely known of the many members of genus Malus that are used by humans. Apple grow on small, deciduous trees that blossom in the spring...
s, and isolated camphoric acid
Camphoric acid
Camphoric acid, C10H16O4 or in Latin form Acidum camphoricum, is a white crystallisable substance obtained from the oxidation of camphor, it exists in three optically different forms; dextrorotatory one is obtained by the oxidation of dextrorotatory camphor and used in...
and quinic acid
Quinic acid
Quinic acid is a cyclitol, a cyclic polyol. It is a crystalline acid obtained from cinchona bark, coffee beans, and other plant products and made synthetically by hydrolysis of chlorogenic acid. Quinic acid is also implicated in the perceived acidity of coffee...
.

His death occurred while he was on a visit to his birthplace.

Among his best known works is "Manuel de l'essayeur" (Manual of the experimental).

The plant genus Vauquelinia
Vauquelinia
Vauquelinia, commonly known as the rosewoods, is a genus of the rose family Rosaceae. It consists of two species of shrubs found in the southwestern United States and northwestern Mexico.V...
is named in his honor, as is the Vauquelin
Vauquelin
Vauquelin is a Norman-French surname, former first name . It may refer to one of the following :People:* Vauquelin de Ferrière, the French name of Walkelin de Ferrers , a Norman baron of Ferrières-Saint-Hilaire...
, an egg white foam associated with molecular gastronomy
Molecular gastronomy
Molecular gastronomy is a subdiscipline of food science that seeks to investigate, explain and make practical use of the physical and chemical transformations of ingredients that occur while cooking, as well as the social, artistic and technical components of culinary and gastronomic phenomena in...
, and the mineral vauquelinite
Vauquelinite
Vauquelinite is a complex mineral with the formula CuPb2CrO4PO4OH making it a combined chromate and phosphate of copper and lead. Discovered in 1818 in the Beryozovskoye deposit, Urals, Russia, it is named after Louis Vauquelin , a French chemist....
, discovered at the same mine as the crocoite
Crocoite
Crocoite is a mineral consisting of lead chromate, PbCrO4, and crystallizing in the monoclinic crystal system. It is sometimes used as a paint, being identical in composition with the artificial product chrome yellow. It was discovered at Berezovsky deposit near Ekaterinburg in the Urals in 1766;...
from which Vauquelin isolated chromium.
The source of this article is wikipedia, the free encyclopedia.  The text of this article is licensed under the GFDL.