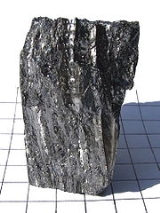 Overview
Beryllium is the chemical element
Chemical element
A chemical element is a pure chemical substance consisting of one type of atom distinguished by its atomic number, which is the number of protons in its nucleus. Familiar examples of elements include carbon, oxygen, aluminum, iron, copper, gold, mercury, and lead.As of November 2011, 118 elements...
with the symbol Be and atomic number
Atomic number
In chemistry and physics, the atomic number is the number of protons found in the nucleus of an atom and therefore identical to the charge number of the nucleus. It is conventionally represented by the symbol Z. The atomic number uniquely identifies a chemical element...
4. It is a divalent
Divalent
In chemistry, a divalent ion or molecule has a valence of two and thus can form two bonds with other ions or molecules. An older term for divalent is bivalent....
element which occurs naturally only in combination with other elements in mineral
Mineral
A mineral is a naturally occurring solid chemical substance formed through biogeochemical processes, having characteristic chemical composition, highly ordered atomic structure, and specific physical properties. By comparison, a rock is an aggregate of minerals and/or mineraloids and does not...
s. Notable gemstones which contain beryllium include beryl
Beryl
The mineral beryl is a beryllium aluminium cyclosilicate with the chemical formula Be3Al26. The hexagonal crystals of beryl may be very small or range to several meters in size. Terminated crystals are relatively rare...
(aquamarine, emerald
Emerald
Emerald is a variety of the mineral beryl colored green by trace amounts of chromium and sometimes vanadium. Beryl has a hardness of 7.5–8 on the 10 point Mohs scale of mineral hardness...
) and chrysoberyl
Chrysoberyl
The mineral or gemstone chrysoberyl is an aluminate of beryllium with the formula BeAl2O4. The name chrysoberyl is derived from the Greek words χρυσός chrysos and βήρυλλος beryllos, meaning "a gold-white spar". Despite the similarity of their names, chrysoberyl and beryl are two completely...
. As a free element it is a steel-gray, strong, lightweight and brittle alkaline earth metal
Alkaline earth metal
The alkaline earth metals are a group in the periodic table. In the modern IUPAC nomenclature, the alkaline earth metals are called the group 2 elements. Previously, they were called the Group IIA elements . The alkaline earth metals contain beryllium , magnesium , calcium , strontium , barium and...
.

Beryllium is used primarily as a hardening agent in alloy
Alloy
An alloy is a mixture or metallic solid solution composed of two or more elements. Complete solid solution alloys give single solid phase microstructure, while partial solutions give two or more phases that may or may not be homogeneous in distribution, depending on thermal history...
s, notably beryllium copper
Beryllium copper
Beryllium copper , also known as copper beryllium, beryllium bronze and spring copper, is a copper alloy with 0.5—3% beryllium and sometimes with other alloying elements. Beryllium copper combines high strength with non-magnetic and non-sparking qualities. It has excellent metalworking, forming...
. In structural applications, high flexural rigidity, thermal stability
Thermal stability
Thermal stability is the stability of a molecule at high temperatures; i.e. a molecule with more stability has more resistance to decomposition at high temperatures....
, thermal conductivity
Thermal conductivity
In physics, thermal conductivity, k, is the property of a material's ability to conduct heat. It appears primarily in Fourier's Law for heat conduction....
and low density
Density
The mass density or density of a material is defined as its mass per unit volume. The symbol most often used for density is ρ . In some cases , density is also defined as its weight per unit volume; although, this quantity is more properly called specific weight...
(1.85 times that of water) make beryllium a quality aerospace
Aerospace
Aerospace comprises the atmosphere of Earth and surrounding space. Typically the term is used to refer to the industry that researches, designs, manufactures, operates, and maintains vehicles moving through air and space...
material for high-speed aircraft
Aircraft
An aircraft is a vehicle that is able to fly by gaining support from the air, or, in general, the atmosphere of a planet. An aircraft counters the force of gravity by using either static lift or by using the dynamic lift of an airfoil, or in a few cases the downward thrust from jet engines.Although...
, missile
Missile
Though a missile may be any thrown or launched object, it colloquially almost always refers to a self-propelled guided weapon system.-Etymology:The word missile comes from the Latin verb mittere, meaning "to send"...
s, space vehicles and communication satellites.

Does beryllium rust or tarnish

What mineral is Beryllium found naturally in?
More
x