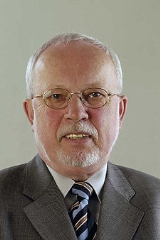 Encyclopedia
Lothar de Maizière is a German
Germany
Germany , officially the Federal Republic of Germany , is a federal parliamentary republic in Europe. The country consists of 16 states while the capital and largest city is Berlin. Germany covers an area of 357,021 km2 and has a largely temperate seasonal climate...
christian democratic
Christian Democracy
Christian democracy is a political ideology that seeks to apply Christian principles to public policy. It emerged in nineteenth-century Europe under the influence of conservatism and Catholic social teaching...
politician. In 1990, he served as the only democratically elected Prime Minister
Prime minister
A prime minister is the most senior minister of cabinet in the executive branch of government in a parliamentary system. In many systems, the prime minister selects and may dismiss other members of the cabinet, and allocates posts to members within the government. In most systems, the prime...
of the German Democratic Republic
German Democratic Republic
The German Democratic Republic , informally called East Germany by West Germany and other countries, was a socialist state established in 1949 in the Soviet zone of occupied Germany, including East Berlin of the Allied-occupied capital city...
, and as such was the last leader of an independent East Germany.

He was born in Nordhausen
Nordhausen
Nordhausen is a town at the southern edge of the Harz Mountains, in the state of Thuringia, Germany. It is the capital of the district of Nordhausen...
, Thuringia
Thuringia
The Free State of Thuringia is a state of Germany, located in the central part of the country.It has an area of and 2.29 million inhabitants, making it the sixth smallest by area and the fifth smallest by population of Germany's sixteen states....
and studied viola at the Hanns Eisler College of Music
Hochschule für Musik Hanns Eisler
The " in Berlin, Germany is one of the leading music conservatories in Europe. It was established in East Berlin in 1950 as the ' because the older was in West Berlin...
in East Berlin
East Berlin
East Berlin was the name given to the eastern part of Berlin between 1949 and 1990. It consisted of the Soviet sector of Berlin that was established in 1945. The American, British and French sectors became West Berlin, a part strongly associated with West Germany but a free city...
from 1959 to 1965. He used to be in the Berlin Symphony Orchestra before he went on to study law (distance learning) at the Humboldt-Universität zu Berlin from 1969 to 1975.

In March 1990, in East Germany's only free election
East German general election, 1990
Legislative elections were held in the German Democratic Republic on 18 March 1990. It was the first—and as it turned out, only—free parliamentary election in East Germany, and the first truly free election held in that part of Germany since 1933...
, he was elected to the Volkskammer
Volkskammer
The People's Chamber was the unicameral legislature of the German Democratic Republic . From its founding in 1949 until the first free elections on 18 March 1990, all members of the Volkskammer were elected on a slate controlled by the Socialist Unity Party of Germany , called the National Front...
as a member of the East German Christian Democratic Union
Christian Democratic Union (East Germany)
The Christian Democratic Union of Germany ) was an East German political party founded in 1945. It was part of the National Front with the Socialist Unity Party of Germany until 1989....
. One month later, he succeeded Hans Modrow
Hans Modrow
Hans Modrow is a German politician, best known as the last communist premier of East Germany. He currently is the honorary Chairman of the Left Party....
as Premier and held this position from April 12 until October 2, 1990; on October 3, the East German state was reunified
German reunification
German reunification was the process in 1990 in which the German Democratic Republic joined the Federal Republic of Germany , and when Berlin reunited into a single city, as provided by its then Grundgesetz constitution Article 23. The start of this process is commonly referred by Germans as die...
with the Federal Republic of Germany
Germany
Germany , officially the Federal Republic of Germany , is a federal parliamentary republic in Europe. The country consists of 16 states while the capital and largest city is Berlin. Germany covers an area of 357,021 km2 and has a largely temperate seasonal climate...
(from 1949 to 1990, West Germany
West Germany
West Germany is the common English, but not official, name for the Federal Republic of Germany or FRG in the period between its creation in May 1949 to German reunification on 3 October 1990....
). As premier he signed the “2+4” treaty
Treaty on the Final Settlement with Respect to Germany
The Treaty on the Final Settlement With Respect to Germany, was negotiated in 1990 between the Federal Republic of Germany and the German Democratic Republic , and the Four Powers which occupied Germany at the end of World War II in Europe: France, the Soviet Union, the United Kingdom, and the...
which ended the four wartime allied powers' rights and responsibilities in Berlin and Germany, and which preceded the unification. The treaty provided that it would be signed by the four allies and the two Germanys but ratified only by the unified Germany and the allies.

After German reunification
German reunification
German reunification was the process in 1990 in which the German Democratic Republic joined the Federal Republic of Germany , and when Berlin reunited into a single city, as provided by its then Grundgesetz constitution Article 23. The start of this process is commonly referred by Germans as die...
he was appointed Minister for Special Affairs in the CDU government of Helmut Kohl
Helmut Kohl
Helmut Josef Michael Kohl is a German conservative politician and statesman. He was Chancellor of Germany from 1982 to 1998 and the chairman of the Christian Democratic Union from 1973 to 1998...
, until his resignation on December 17, 1990 amid rumors that he had worked for the East German Stasi
Stasi
The Ministry for State Security The Ministry for State Security The Ministry for State Security (German: Ministerium für Staatssicherheit (MfS), commonly known as the Stasi (abbreviation , literally State Security), was the official state security service of East Germany. The MfS was headquartered...
.

He belongs to a noble family who, as Huguenot
Huguenot
The Huguenots were members of the Protestant Reformed Church of France during the 16th and 17th centuries. Since the 17th century, people who formerly would have been called Huguenots have instead simply been called French Protestants, a title suggested by their German co-religionists, the...
s, fled France
France
The French Republic , The French Republic , The French Republic , (commonly known as France , is a unitary semi-presidential republic in Western Europe with several overseas territories and islands located on other continents and in the Indian, Pacific, and Atlantic oceans. Metropolitan France...
for asylum in Prussia
Prussia
Prussia was a German kingdom and historic state originating out of the Duchy of Prussia and the Margraviate of Brandenburg. For centuries, the House of Hohenzollern ruled Prussia, successfully expanding its size by way of an unusually well-organized and effective army. Prussia shaped the history...
in the late 17th century. He is a son of the lawyer Clement de Maizière. His uncle Ulrich de Maizière
Ulrich de Maizière
Ulrich de Maizière was a German general. He served as an aide to general Adolf Heusinger during World War II and later succeeded Heusinger as Chief of Staff of the Bundeswehr, holding the position from 1966 to 1972...
was Inspector General of the (West) German Armed Forces
Bundeswehr
The Bundeswehr consists of the unified armed forces of Germany and their civil administration and procurement authorities...
. His cousin Thomas de Maizière
Thomas de Maizière
Karl Ernst Thomas de Maizière is a German politician , currently serving as the Minister of Defence in the Second Cabinet of Chancellor Angela Merkel....
is Federal Minister of Defense as of 3 March 2011.