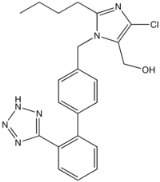 As with all angiotensin II type 1 receptor (AT1) antagonists, losartan is indicated for the treatment of hypertension. It may also delay progression of diabetic nephropathy
Diabetic nephropathy
Diabetic nephropathy , also known as Kimmelstiel-Wilson syndrome, or nodular diabetic glomerulosclerosis and intercapillary glomerulonephritis, is a progressive kidney disease caused by angiopathy of capillaries in the kidney glomeruli. It is characterized by nephrotic syndrome and diffuse...
, and is also indicated for the reduction of renal disease progression in patients with type 2 diabetes, hypertension and microalbuminuria (>30 mg/24 hours) or proteinuria (>900 mg/24 hours).

Although clinical evidence shows calcium channel blockers and thiazide-type diuretics are preferred first-line treatments for most patients (from both efficacy and cost points of view), an angiotensin II receptor antagonist such as losartan is recommended as first-line treatment in patients under the age of 55 who cannot tolerate an ACE inhibitor
ACE inhibitor
ACE inhibitors or angiotensin-converting enzyme inhibitors are a group of drugs used primarily for the treatment of hypertension and congestive heart failure...
. The LIFE study demonstrated losartan was significantly superior to atenolol in the primary prevention of adverse cardiovascular events (myocardial infarction or stroke), with a significant reduction in cardiovascular morbidity and mortality for a comparable reduction in blood pressure. A study hints that losartan has a beneficial effect on mitochondria by reversing age related dysfunction in maintaining normal blood pressure and cellular energy usage.

Losartan is well absorbed following oral administration and undergoes significant first-pass metabolism to produce 5-carboxylic acid metabolite, designated as EXP3174. This metabolite is a long-acting (6 to 8 hr), noncompetitive antagonist at the AT1 receptor, and contributes to the pharmacological effects of losartan. EXP3174 is 10-40 times more potent in blocking AT1 receptors than losartan. Losartan's bioavailability
Bioavailability
In pharmacology, bioavailability is a subcategory of absorption and is used to describe the fraction of an administered dose of unchanged drug that reaches the systemic circulation, one of the principal pharmacokinetic properties of drugs. By definition, when a medication is administered...
is about 32%.

Losartan has been found to downregulate the expression of transforming growth factor beta (TGF-β) types I and II receptors in the kidney of diabetic rats, which may partially account for its nephroprotective effects. Effects on TGF-β expression may also account for its potential efficacy in Marfan syndrome
Marfan syndrome
Marfan syndrome is a genetic disorder of the connective tissue. People with Marfan's tend to be unusually tall, with long limbs and long, thin fingers....
and Duchenne muscular dystrophy
Duchenne muscular dystrophy
Duchenne muscular dystrophy is a recessive X-linked form of muscular dystrophy, which results in muscle degeneration, difficulty walking, breathing, and death. The incidence is 1 in 3,000 boys. Females and males are affected, though females are rarely affected and are more often carriers...
(DMD) – losartan has been shown to prevent aortic aneurysm
Aortic aneurysm
An aortic aneurysm is a general term for any swelling of the aorta to greater than 1.5 times normal, usually representing an underlying weakness in the wall of the aorta at that location...
and certain pulmonary complications in a mouse model of the disease.

Mechanism of action and pharmacological actions

Losartan is a uricosuric
Uricosuric
Uricosuric medications are substances that increase the excretion of uric acid in the urine, thus reducing the concentration of uric acid in blood plasma. In general, this effect is achieved by action on the proximal tubule...
. Because losartan can cause hyperkalemia
Hyperkalemia
Hyperkalemia refers to the condition in which the concentration of the electrolyte potassium in the blood is elevated...
, potassium supplements or salt substitutes containing potassium should not be used without consulting the prescribing physician.

Losartan is being researched as a possible drug for marked slowing of aortic enlargement in Marfan and related syndromes.

Losartan is being researched as a possible protection against loss of damaged or old muscle.

Losartan has recently been found to be a cognitive enhancer. It improved memory in people with normal blood pressure under standard conditions, as well as during memory impaired tasks (co-administration of scopolamine
Scopolamine
Scopolamine, also known as levo-duboisine, and hyoscine, is a tropane alkaloid drug with muscarinic antagonist effects. It is among the secondary metabolites of plants from Solanaceae family of plants, such as henbane, jimson weed and Angel's Trumpets , and corkwood...
).