The event is a street parade which in its modern form is a fairly light-hearted combination of traditional British pageantry and elements of carnival
Carnival
Carnaval is a festive season which occurs immediately before Lent; the main events are usually during February. Carnaval typically involves a public celebration or parade combining some elements of a circus, mask and public street party...
. On the day after being sworn in, the Lord Mayor and several others participate in a procession from the City of London to the Royal Courts of Justice
Royal Courts of Justice
The Royal Courts of Justice, commonly called the Law Courts, is the building in London which houses the Court of Appeal of England and Wales and the High Court of Justice of England and Wales...
in the City of Westminster
City of Westminster
The City of Westminster is a London borough occupying much of the central area of London, England, including most of the West End. It is located to the west of and adjoining the ancient City of London, directly to the east of the Royal Borough of Kensington and Chelsea, and its southern boundary...
, where the Lord Mayor swears his allegiance to the Crown
Monarchy of the United Kingdom
The monarchy of the United Kingdom is the constitutional monarchy of the United Kingdom and its overseas territories. The present monarch, Queen Elizabeth II, has reigned since 6 February 1952. She and her immediate family undertake various official, ceremonial and representational duties...
.


Date of the Lord Mayor's Show

Originally, the Show occurred annually on 29 October. In 1751, Great Britain replaced the Julian Calendar
Julian calendar
The Julian calendar began in 45 BC as a reform of the Roman calendar by Julius Caesar. It was chosen after consultation with the astronomer Sosigenes of Alexandria and was probably designed to approximate the tropical year .The Julian calendar has a regular year of 365 days divided into 12 months...
with the Gregorian Calendar
Gregorian calendar
The Gregorian calendar, also known as the Western calendar, or Christian calendar, is the internationally accepted civil calendar. It was introduced by Pope Gregory XIII, after whom the calendar was named, by a decree signed on 24 February 1582, a papal bull known by its opening words Inter...
; the Lord Mayor's Show was then moved to 9 November. In 1959, another change was made: now, the Lord Mayor's Show is held on the second Saturday in November. The Lord Mayor's Show has regularly been held on the scheduled day; it has not been moved since 1852, when the Show made way for Arthur Wellesley, 1st Duke of Wellington
Arthur Wellesley, 1st Duke of Wellington
Field Marshal Arthur Wellesley, 1st Duke of Wellington, KG, GCB, GCH, PC, FRS , was an Irish-born British soldier and statesman, and one of the leading military and political figures of the 19th century...
's funeral. The Show was not interrupted by the Second World War
World War II
World War II, or the Second World War , was a global conflict lasting from 1939 to 1945, involving most of the world's nations—including all of the great powers—eventually forming two opposing military alliances: the Allies and the Axis...
. The Lord Mayor has been making that journey every year for 785 years, surviving plague and fire and countless wars and insurrections. The modern Lord Mayor's procession is a direct descendant of that first journey to Westminster.


The Lord Mayor's transport and the origin of parade "floats"

Formerly, the route was varied each year so that the procession could pass through the Lord Mayor's home ward; since 1952, however, the route has been fixed. The Lord Mayor rode on horseback or went on a barge via the River Thames
River Thames
The River Thames flows through southern England. It is the longest river entirely in England and the second longest in the United Kingdom. While it is best known because its lower reaches flow through central London, the river flows alongside several other towns and cities, including Oxford,...
, based on the route chosen. The river transport for the Lord Mayor's Show gave rise to the word float, used in the context of parade
Parade
A parade is a procession of people, usually organized along a street, often in costume, and often accompanied by marching bands, floats or sometimes large balloons. Parades are held for a wide range of reasons, but are usually celebrations of some kind...
s.

After Lord Mayor Sir Gilbert Heathcote was unseated by a drunken flower girl in 1710, state coaches replaced horses. The last time barges were used was in 1856. Now the Lord Mayor travels in a State Coach with side panels painted by Cipriani
Giovanni Battista Cipriani
Giovanni Battista Cipriani , Italian painter and engraver, Pistoiese by descent, was born in Florence.-History:His first lessons were given him by a Florentine of English descent, Ignatius Hugford, and then under Anton Domenico Gabbiani...
, who also did the panels of the Gold State Coach
Gold State Coach
The Gold State Coach is an enclosed, eight horse-drawn carriage used by the British Royal Family. It was built in the London workshops of Samuel Butler in 1762 and has been used at the coronation of every British monarch since George IV...
used by Queen Elizabeth II. The Lord Mayor's Coach was built in 1757 at a cost of £1,065.0s.3d. (over £120,000 in modern terms). It is pulled by six horses - only two fewer than that of the Queen.


Privileged Regiments of the City of London, and others 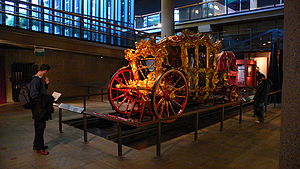 The many other participants lend a unique flavour to the occasion which include organizations that the Lord Mayor wishes to support or has belonged to, such as charities, old schools and business associations before becoming Lord Mayor. St John Ambulance participates, for instance, as do the Zurich Guilds
Zünfte of Zürich
There are fourteen historical Zünfte of Zurich, under the system established in 1336 with the "guild revolution" of Rudolf Brun...
.

Gog and Magog
Gog and Magog
Gog and Magog are names that appear primarily in various Jewish, Christian and Muslim scriptures, as well as numerous subsequent references in other works. Their context can be either genealogical or eschatological and apocalyptic, as in Ezekiel and Revelation...
are two woven willow giant reproductions of a pair of statues in Guildhall
Guildhall, London
The Guildhall is a building in the City of London, off Gresham and Basinghall streets, in the wards of Bassishaw and Cheap. It has been used as a town hall for several hundred years, and is still the ceremonial and administrative centre of the City of London and its Corporation...
. These popular icons reflect the pre-Roman legendary past of the City of London
City of London
The City of London is a small area within Greater London, England. It is the historic core of London around which the modern conurbation grew and has held city status since time immemorial. The City’s boundaries have remained almost unchanged since the Middle Ages, and it is now only a tiny part of...
and they too are paraded by volunteers each year. The most recent representations were created by members of the Worshipful Company of Basketmakers
Worshipful Company of Basketmakers
The Worshipful Company of Basketmakers is one of the Livery Companies of the City of London. The Company was constituted in 1569. It was recognised as a Livery Company in 1825, and received a Royal Charter in 1937. The Company has recently instituted Yeoman memberships for working basketmakers and...
.

The procession begins at Guildhall
Guildhall, London
The Guildhall is a building in the City of London, off Gresham and Basinghall streets, in the wards of Bassishaw and Cheap. It has been used as a town hall for several hundred years, and is still the ceremonial and administrative centre of the City of London and its Corporation...
; the Lord Mayor joins the rear from his official residence, Mansion House
Mansion House, London
Mansion House is the official residence of the Lord Mayor of the City of London in London, England. It is used for some of the City of London's official functions, including an annual dinner, hosted by the Lord Mayor, at which the Chancellor of the Exchequer customarily gives a speech – his...
, having watched a flypast
Flypast
Flypast is a term used in the United Kingdom, the Commonwealth, and other countries to denote ceremonial or honorific flights by groups of aircraft and, rarely, by a single aircraft...
.

Along the route, the Lord Mayor stops at St Paul's Cathedral
St Paul's Cathedral
St Paul's Cathedral, London, is a Church of England cathedral and seat of the Bishop of London. Its dedication to Paul the Apostle dates back to the original church on this site, founded in AD 604. St Paul's sits at the top of Ludgate Hill, the highest point in the City of London, and is the mother...
in order to receive a blessing from the Dean on the Cathedral steps. On his arrival at the Royal Courts of Justice
Royal Courts of Justice
The Royal Courts of Justice, commonly called the Law Courts, is the building in London which houses the Court of Appeal of England and Wales and the High Court of Justice of England and Wales...
in Westminster, he takes the oath of allegiance; the return procession then recongregates on Aldwych, outside the London School of Economics
London School of Economics
The London School of Economics and Political Science is a public research university specialised in the social sciences located in London, United Kingdom, and a constituent college of the federal University of London...
stretching down to the River, before it begins from Temple Place. When returning, as when going to the Royal Courts of Justice, the Lord Mayor joins the back of the procession. Upon his return to Mansion House, members of the City of London Corporation welcome him.

The parade, which begins at about eleven o'clock in the forenoon, concludes at about half past two in the afternoon. The procession is over three miles (roughly five kilometres) long, but the route itself is much shorter; the head of the procession reaches the end of the route before the Lord Mayor even leaves his home. In the evening, a fireworks
Fireworks
Fireworks are a class of explosive pyrotechnic devices used for aesthetic and entertainment purposes. The most common use of a firework is as part of a fireworks display. A fireworks event is a display of the effects produced by firework devices...
display is held.

The Show has been televised live by the BBC each year in recent years, in a special programme broadcast on BBC One
BBC One
BBC One is the flagship television channel of the British Broadcasting Corporation in the United Kingdom. It was launched on 2 November 1936 as the BBC Television Service, and was the world's first regular television service with a high level of image resolution...
.