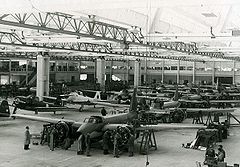 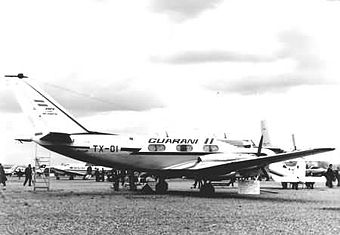 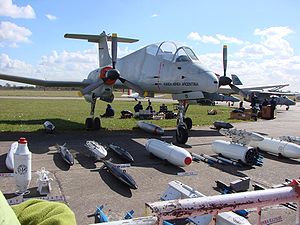 The Fábrica Argentina de Aviones or FAdeA SA officially Fábrica Argentina de Aviones "Brigadier San Martín" S.A., is Argentina
Argentina
Argentina , officially the Argentine Republic , is the second largest country in South America by land area, after Brazil. It is constituted as a federation of 23 provinces and an autonomous city, Buenos Aires...
's main aircraft manufacturer. Founded on 10 October 1927 and located in Córdoba
Córdoba, Argentina
Córdoba is a city located near the geographical center of Argentina, in the foothills of the Sierras Chicas on the Suquía River, about northwest of Buenos Aires. It is the capital of Córdoba Province. Córdoba is the second-largest city in Argentina after the federal capital Buenos Aires, with...
, for most of its existence it was known as Fábrica Militar de Aviones (hence the acronym FMA), until its privatisation in the 1990s. On 2010 the concession ended and is now wholly owned by the Argentine government.

Formed on October 10, 1927 and on July 18, 1928 ends the construction and testing begins on the track the first domestically produced aircraft: the license built Avro 504 Gosport training aircraft equipped with a 100 hp Gnome engine. It had a speed of 140 km/h with a flying endurance of 2hours.

The factory is known for producing the first fighter aircraft in Latin America: the Pulqui I (1947) and the Pulqui II (1950) under the direction of engineers Emile Dewoitine
Émile Dewoitine
Émile Dewoitine was a French aviation industrialist.- Prewar industrial activities :Born in Crépy-en-Laonnois, Émile Dewoitine entered the aviation industry by working at Latécoère during Word War I...
(French) and Kurt Tank
Kurt Tank
Kurt Waldemar Tank was a German aeronautical engineer and test pilot, heading the design department at Focke-Wulf from 1931-45. He designed several important aircraft of World War II, including the Focke-Wulf Fw 190 fighter aircraft.-Early life:Tank was born in Bromberg , Province of Posen...
(German) respectively.

FMA was closed in 1995 and was privatized by the government of Carlos Menem
Carlos Menem
Carlos Saúl Menem is an Argentine politician who was President of Argentina from 1989 to 1999. He is currently an Argentine National Senator for La Rioja Province.-Early life:...
and from 1995 until March 2009 it belonged concession to LMAASA (Lockheed Martin Aircraft Argentina SA, a subsidiary of Lockheed Martin Corporation). Under the terms of the privatization agreement LMAASA would operate it for 25 years and could be renewed for two 10 year periods.

During the government of Cristina Fernández de Kirchner
Cristina Fernández de Kirchner
Cristina Elisabet Fernández de Kirchner , commonly known as Cristina Fernández or Cristina Kirchner is the 55th and current President of Argentina and the widow of former President Néstor Kirchner. She is Argentina's first elected female president, and the second female president ever to serve...
the factory was nationalised
Nationalization
Nationalisation, also spelled nationalization, is the process of taking an industry or assets into government ownership by a national government or state. Nationalization usually refers to private assets, but may also mean assets owned by lower levels of government, such as municipalities, being...
in August 2009 after paying ARS $
Argentine peso
The peso is the currency of Argentina, identified by the symbol $ preceding the amount in the same way as many countries using dollar currencies. It is subdivided into 100 centavos. Its ISO 4217 code is ARS...
67 million. The text of the expropriation law provides that "the State shall not return to get rid of a majority stake in the power or decision-making factory."

Its was renamed after Argentine Air Force Brigadier :es:Juan Ignacio San Martín a military engineer who laid the foundations of the aeronautics industry at Córdoba when he directed the Instituto Aerotécnico, the forerunner of the FMA, in the 1940s.

The FMA has produced numerous innovative aircraft prototypes, but the state of the Argentine economy has usually prevented most of them from entering large-scale production. Nevertheless the FMA has managed to put several aircraft types of more conventional designs into full productions. It also engaged in production of licensed aircraft from other countries.

The prefixes used for the aircraft locally developed (and produced) are:

|3+1+3
|Glider, flying wing. Designed by Reimar Horten
Horten brothers
Walter Horten and Reimar Horten , sometimes credited as the Horten Brothers, were German aircraft pilots and enthusiasts, and members of the Hitler Youth and Nazi party...
, also known as the Horten XVa and XVb
|-----
|1950
|I.Ae. 33 Pulqui II
FMA IAe 33 Pulqui II
The FMA IAe 33 Pulqui II was a jet fighter aircraft designed by Kurt Tank in the late 1940s in Argentina, under the Perón government, and built by the Fábrica Militar de Aviones...

|120
|Counter-insurgency/light attack aircraft
|-----
|1978
|FMA IA 62
FMA IA 62
The FMA IA.62 was a military trainer aircraft under development in Argentina in the late 1970s. It was developed in response to an Argentine Air Force request for a replacement for its Beech B-45 trainers then in service. The new aircraft was to combine its main role as a primary trainer with...

|18
|other 18 by Lockheed Martin
Lockheed Martin
Lockheed Martin is an American global aerospace, defense, security, and advanced technology company with worldwide interests. It was formed by the merger of Lockheed Corporation with Martin Marietta in March 1995. It is headquartered in Bethesda, Maryland, in the Washington Metropolitan Area....
in Pasadena, California
Pasadena, California
Pasadena is a city in Los Angeles County, California, United States. Although famous for hosting the annual Rose Bowl football game and Tournament of Roses Parade, Pasadena is the home to many scientific and cultural institutions, including the California Institute of Technology , the Jet...
.
|-----
|2003
|T-34 Mentor
T-34 Mentor
The Beechcraft T-34 Mentor is a propeller-driven, single-engined, military trainer aircraft derived from the Beechcraft Model 35 Bonanza. The earlier versions of the T-34, dating from around the late 1940s to the 1950s, were piston-engined. These were eventually succeeded by the upgraded T-34C...

|
|Refurbished of Argentine
Argentine Air Force
The Argentine Air Force is the national aviation branch of the Armed Forces of the Argentine Republic. , it had 14,606 military and 6,854 civilian staff.-History:...
and Bolivia
Military of Bolivia
- Army :The Bolivian Army has around 55,500 men. There are six military regions in the army. The Army is organized into ten divisions...
Air Forces
|-----
|2006
|C-130 Hercules
C-130 Hercules
The Lockheed C-130 Hercules is a four-engine turboprop military transport aircraft designed and built originally by Lockheed, now Lockheed Martin. Capable of using unprepared runways for takeoffs and landings, the C-130 was originally designed as a troop, medical evacuation, and cargo transport...

|
|Refurbished of Argentine
Argentine Air Force
The Argentine Air Force is the national aviation branch of the Armed Forces of the Argentine Republic. , it had 14,606 military and 6,854 civilian staff.-History:...
and Colombian
Colombian Air Force
The Colombian Air Force or FAC is the Air Force of the Republic of Colombia.The Colombian Air Force is one of the three institutions of the Armed Forces of Colombia, charge according to the 1991 Constitution of the work to exercise and maintain control of Colombia's airspace to defend the...
Air Forces
|-----
! colspan=4 style="text-align: center; background: #C4CCFC;"|Name changed to FADEA SA
|-----
|2009
|FMA IA 63 Pampa
FMA IA 63 Pampa
|-See also:-References:*Flores, Jackson, . "The Pampa...A Tutor with a Teutonic Flavour". Air International, February 1987, Vol 32 No. 2. Bromley, UK:Fine Scroll. ISSN 0306-5634. pp. 59—66, 90....