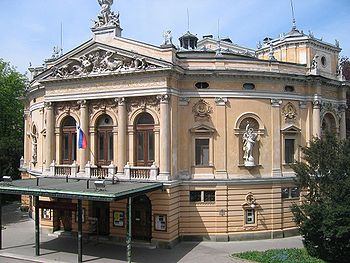 Slovenian National Opera and Ballet Theatre is an opera house
Opera house
An opera house is a theatre building used for opera performances that consists of a stage, an orchestra pit, audience seating, and backstage facilities for costumes and set building...
in Ljubljana
Ljubljana
Ljubljana is the capital of Slovenia and its largest city. It is the centre of the City Municipality of Ljubljana. It is located in the centre of the country in the Ljubljana Basin, and is a mid-sized city of some 270,000 inhabitants...
, the capital of Slovenia
Slovenia
Slovenia , officially the Republic of Slovenia , is a country in Central and Southeastern Europe touching the Alps and bordering the Mediterranean. Slovenia borders Italy to the west, Croatia to the south and east, Hungary to the northeast, and Austria to the north, and also has a small portion of...
. It serves as the national opera building of the country.

It was previously the home of the Provincial Theatre which was built between 1890 and 1892 in the Neo-Renaissance
Neo-Renaissance
Renaissance Revival is an all-encompassing designation that covers many 19th century architectural revival styles which were neither Grecian nor Gothic but which instead drew inspiration from a wide range of classicizing Italian modes...
style by the Czech
Czech people
Czechs, or Czech people are a western Slavic people of Central Europe, living predominantly in the Czech Republic. Small populations of Czechs also live in Slovakia, Austria, the United States, the United Kingdom, Chile, Argentina, Canada, Germany, Russia and other countries...
architects Jan Vladimír Hráský
Jan Vladimir Hrásky
Jan Vladimir Hrásky was a Czech architect, builder, engineer, and hydrologist.Hrásky is known in Slovenia as an original author of building in Neo-Renaissance style of Carniolan Provincial Manor in Ljubljana , where from 1919 is a seat of the University of Ljubljana, and of the National Hall in...
and Anton Hruby. Before the construction of the German Theatre (the present Slovene National Theatre
Slovene National Theatre
Slovene National Theatre is a theatre in Maribor in Slovenia,With performances of dramas, operas and ballets the theatre has the largest annual attendance in the entire country of Slovenia .-Performances:...
(SNG) on Erjavčeva 1) in 1911, the building served as a venue for productions in both Slovenian
Slovenian language
Slovene or Slovenian is a South Slavic language spoken by approximately 2.5 million speakers worldwide, the majority of whom live in Slovenia. It is the first language of about 1.85 million people and is one of the 23 official and working languages of the European Union...
and German
German language
German is a West Germanic language, related to and classified alongside English and Dutch. With an estimated 90 – 98 million native speakers, German is one of the world's major languages and is the most widely-spoken first language in the European Union....
, and afterwards only in Slovenian.

The facade of the Opera House has Ionic columns supporting a tympanum
Tympanum (architecture)
In architecture, a tympanum is the semi-circular or triangular decorative wall surface over an entrance, bounded by a lintel and arch. It often contains sculpture or other imagery or ornaments. Most architectural styles include this element....
above the entrance and has two niches at the side adorned with allegorical
Allegory
Allegory is a demonstrative form of representation explaining meaning other than the words that are spoken. Allegory communicates its message by means of symbolic figures, actions or symbolic representation...
statues of Tragedy
Tragedy
Tragedy is a form of art based on human suffering that offers its audience pleasure. While most cultures have developed forms that provoke this paradoxical response, tragedy refers to a specific tradition of drama that has played a unique and important role historically in the self-definition of...
and Comedy
Comedy
Comedy , as a popular meaning, is any humorous discourse or work generally intended to amuse by creating laughter, especially in television, film, and stand-up comedy. This must be carefully distinguished from its academic definition, namely the comic theatre, whose Western origins are found in...
by sculptor Alojzij Gangl (1859-1935). The Ljubljana Opera House is located between the Slovenian Parliament
Slovenian Parliament
The Slovenian Parliament is the informal designation of the general representative body of the Slovenian nation and the legislative body of the Republic of Slovenia....
building, the National Museum
National Museum of Slovenia
The National Museum of Slovenia is located in Ljubljana, the capital of Slovenia. It is situated in the Center district of the city near the Tivoli Park....
and the National Gallery
National Gallery of Slovenia
The National Gallery of Slovenia is the national art gallery of Slovenia. It is located in the capital Ljubljana.The Slovenian National Gallery was founded in 1918, after the dissolution of Austria-Hungary and the establishment of the State of Slovenes, Croats and Serbs...
.