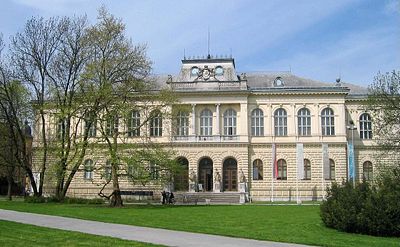 The National Museum of Slovenia is located in Ljubljana
Ljubljana
Ljubljana is the capital of Slovenia and its largest city. It is the centre of the City Municipality of Ljubljana. It is located in the centre of the country in the Ljubljana Basin, and is a mid-sized city of some 270,000 inhabitants...
, the capital of Slovenia
Slovenia
Slovenia , officially the Republic of Slovenia , is a country in Central and Southeastern Europe touching the Alps and bordering the Mediterranean. Slovenia borders Italy to the west, Croatia to the south and east, Hungary to the northeast, and Austria to the north, and also has a small portion of...
. It is situated in the Center
Center (Ljubljana)
The Center District or simply Center is a city district in the center of Ljubljana, the capital of Slovenia. It has an area of about . Its major thoroughfares are Slovenian Street , Čop Street , Cankar Street , Wolf Street , Trubar Street , and Miklošič Street , and the major squares are Congress...
district of the city near the Tivoli Park.

Along with the Slovenian Museum of Natural History
Slovenian Museum of Natural History
The Slovenian Museum of Natural History is a Slovenian national museum with natural history, scientific, and educational contents. It is the oldest cultural and scientific Slovenian institution stemming from the Carniolian Museum founded in 1821...
, located in the same building, the National Museum of Slovenia is the country's oldest scientific and cultural institution. The museum has an extensive collection of archaeological artefacts, old coins
COinS
ContextObjects in Spans, commonly abbreviated COinS, is a method to embed bibliographic metadata in the HTML code of web pages. This allows bibliographic software to publish machine-readable bibliographic items and client reference management software to retrieve bibliographic metadata. The...
and banknotes (in the numismatics
Numismatics
Numismatics is the study or collection of currency, including coins, tokens, paper money, and related objects. While numismatists are often characterized as students or collectors of coins, the discipline also includes the broader study of money and other payment media used to resolve debts and the...
department on the ground floor) and displays related to the applied arts.

The museum was founded in 1821 by the as the "Estate Museum of Carniola
Carniola
Carniola was a historical region that comprised parts of what is now Slovenia. As part of Austria-Hungary, the region was a crown land officially known as the Duchy of Carniola until 1918. In 1849, the region was subdivided into Upper Carniola, Lower Carniola, and Inner Carniola...
" . Five years later, the Austrian Emperor
Austrian Empire
The Austrian Empire was a modern era successor empire, which was centered on what is today's Austria and which officially lasted from 1804 to 1867. It was followed by the Empire of Austria-Hungary, whose proclamation was a diplomatic move that elevated Hungary's status within the Austrian Empire...
Francis I
Francis II, Holy Roman Emperor
Francis II was the last Holy Roman Emperor, ruling from 1792 until 6 August 1806, when he dissolved the Empire after the disastrous defeat of the Third Coalition by Napoleon at the Battle of Austerlitz...
decided to personally sponsor the museum and ordered its renaming to "Provincial Museum of Carniola". In 1882, the museum was renamed to "Provincial Museum of Carniola - Rudolfinium" in honour of the Crown Prince Rudolph.

The current building, designed in a Neo-Renaissance
Neo-Renaissance
Renaissance Revival is an all-encompassing designation that covers many 19th century architectural revival styles which were neither Grecian nor Gothic but which instead drew inspiration from a wide range of classicizing Italian modes...
style by the Slovene architect Viljem Treo, was built between 1881 and 1885. The interior decorations were made by the painters Janez and Jurij Šubic. A monument to the Carniola
Carniola
Carniola was a historical region that comprised parts of what is now Slovenia. As part of Austria-Hungary, the region was a crown land officially known as the Duchy of Carniola until 1918. In 1849, the region was subdivided into Upper Carniola, Lower Carniola, and Inner Carniola...
n polyhistor Janez Vajkard Valvasor
Janez Vajkard Valvasor
Johann Weichard Freiherr von Valvasor or simply Valvasor was a Slovenian nobleman, scientist and polymath, and a fellow of the Royal Society in London.-Biography:...
, designed by the sculptor Alojz Gangl, was placed in front of the Museum in 1904. The National Museum is located close to the Slovenian Parliament
Slovenian Parliament
The Slovenian Parliament is the informal designation of the general representative body of the Slovenian nation and the legislative body of the Republic of Slovenia....
building and the Slovenian Foreign Ministry
Mladika
The Mladika building is the headquarters of the Ministry of Foreign Affairs of the Republic of Slovenia , located in the country's capital Ljubljana....
, while the Ljubljana opera house
Ljubljana opera house
Slovenian National Opera and Ballet Theatre is an opera house in Ljubljana, the capital of Slovenia. It serves as the national opera building of the country.-Opera in Slovenia:...
stands just opposite to it on the same square.