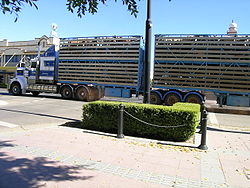 Livestock transportation is the movement of live animals, by ship, rail, road or air. Livestock
Livestock
Livestock refers to one or more domesticated animals raised in an agricultural setting to produce commodities such as food, fiber and labor. The term "livestock" as used in this article does not include poultry or farmed fish; however the inclusion of these, especially poultry, within the meaning...
are transported for many reasons, including but not limited to sale, auction
Auction
An auction is a process of buying and selling goods or services by offering them up for bid, taking bids, and then selling the item to the highest bidder...
, breeding
Selective breeding
Selective breeding is the process of breeding plants and animals for particular genetic traits. Typically, strains that are selectively bred are domesticated, and the breeding is sometimes done by a professional breeder. Bred animals are known as breeds, while bred plants are known as varieties,...
, livestock shows, rodeo
Rodeo
Rodeo is a competitive sport which arose out of the working practices of cattle herding in Spain, Mexico, and later the United States, Canada, South America and Australia. It was based on the skills required of the working vaqueros and later, cowboys, in what today is the western United States,...
s, fairs, slaughter
Animal slaughter
Slaughter is the term used to describe the killing and butchering of animals, usually for food. Commonly it refers to killing and butchering of domestic livestock ....
, and grazing
Grazing
Grazing generally describes a type of feeding, in which a herbivore feeds on plants , and also on other multicellular autotrophs...
.

The first known records of livestock transportation occurred in about 1607 on an English
England
England is a country that is part of the United Kingdom. It shares land borders with Scotland to the north and Wales to the west; the Irish Sea is to the north west, the Celtic Sea to the south west, with the North Sea to the east and the English Channel to the south separating it from continental...
ship named the Susan Constant
Susan Constant
Susan Constant, captained by Christopher Newport, was the largest of three ships of the English Virginia Company on the 1606-1607 voyage that resulted in the founding of Jamestown in the new Colony of Virginia.-History:Susan Constant was rated at 120 tons. Her keel length is estimated at 55.2 feet...
, which was transporting Jamestown
Jamestown, Virginia
Jamestown was a settlement in the Colony of Virginia. Established by the Virginia Company of London as "James Fort" on May 14, 1607 , it was the first permanent English settlement in what is now the United States, following several earlier failed attempts, including the Lost Colony of Roanoke...
bound colonists. As time passed and the New World developed, supply ships from England carried livestock as regular cargo. Purebred stock was imported to Plymouth and Philadelphia. By about 1700, the exports of cattle and packed meat regularly left the port of Philadelphia which was bound for the West Indies. Livestock fatalities during sea shipments would often be 50% or more, which was attributed to poor feed supply, overcrowding, and rough seas.

Chicago
Chicago
Chicago is the largest city in the US state of Illinois. With nearly 2.7 million residents, it is the most populous city in the Midwestern United States and the third most populous in the US, after New York City and Los Angeles...
’s meat exports had risen to almost 10% by 1848. Supposedly the first shipment of live cattle to Chicago by rail car was in 1867 on the Kansas Pacific Railway
Kansas Pacific Railway
The Kansas Pacific Railway was a historic railroad company that operated in the western United States in the late 19th century. It was a federally chartered railroad, backed with government land grants. It operated many of the first long-distance lines in the state of Kansas in the 1870s,...
. About twenty carloads of Longhorns from Texas left the rail yard at Abilene, Kansas
Abilene, Kansas
Abilene is a city in and the county seat of Dickinson County, Kansas, United States. As of the 2010 census, the city population was 6,844.-History:...
on the Kansas Pacific Railroad destined for the Chicago Stock Yards
Union Stock Yards
The Union Stock Yard & Transit Co., or The Yards, was the meat packing district in Chicago for over a century starting in 1865. The district was operated by a group of railroad companies that acquired swampland, and turned it to a centralized processing area...
. This event changed the face of the livestock industry. Cattle from Texas were driven
Cattle drives in the United States
Cattle drives were a major economic activity in the American west, particularly between the years 1866-1886, when 20 million cattle were herded from Texas to railheads in Kansas for shipments to stockyards in Chicago and points east...
to rail yards for transport to major feeders, processors, and packers. Cattle trails were carefully chosen to minimize distance and maximize feed to sustain and fatten cattle. Cowboys were hired to gather, drive, and hold cattle at major buying stations. Cowboys reported route trail fatalities of about 3%. As the railroads expanded, processors multiplied and refrigeration
Refrigeration
Refrigeration is a process in which work is done to move heat from one location to another. This work is traditionally done by mechanical work, but can also be done by magnetism, laser or other means...
technology developed, the refrigerated rail car was patented in 1867. The need to drive cattle ended and the cattle drive trail disappeared by 1889. The improvement of refrigerated transport gave birth to the dressed meat market. The distribution of dressed meat exploded, causing the need to ship live cattle by rail to slowly decrease and to become economically unfeasible.

By the early 20th century, railroads dominated the dressed meat market and the commodity trucking industry was in its infancy. By the middle of the 20th century, the refrigerated trailer was developed for commercial trucking and then the shipping of processed meats was done primarily by the trucking industry. The rail roads had fallen in to disrepair nor could they offer as many options for shipping and receiving of cattle and other livestock. Shipping live cattle by truck was much more economical, humane and offered more options in routing cattle to auctions, feeders, and processors. The trucking industry helped to create an interconnected road system throughout the United States.

Today most livestock and processed meat is transported by trucking companies that have specialized trailers for this purpose. Droving
Droving
Droving is the practice of moving livestock over large distances by walking them "on the hoof".Droving stock to market, usually on foot and often with the aid of dogs, has a very long history in the old world...
or herding
Herding
Herding is the act of bringing individual animals together into a group , maintaining the group and moving the group from place to place—or any combination of those. While the layperson uses the term "herding", most individuals involved in the process term it mustering, "working stock" or...
, the movement of animals over ground, is still used in more remote or local areas.

Due to international demand for livestock there is the need for various countries to be able to trade via import/export. For various reasons, primarily due to animal welfare and quarantine conditions the need for Livestock transportation by air is a growing service. Particular innovators such as Intradco Cargo Services in the U.K have developed capabilities to transport all types on livestock by air. Intradco now transport a variety of livestock on a global scale. This involves specially designed penning system and stalls which all are different for the various types of Livestock. Cattle is a regular international shipment, however Horses are also frequent flyers between various events and races that occur on an international stage.
The source of this article is wikipedia, the free encyclopedia.  The text of this article is licensed under the GFDL.