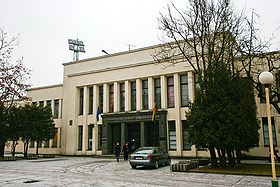 The Lithuanian Academy of Physical Education is the only state-supported institution of tertiary physical education
Physical education
Physical education or gymnastics is a course taken during primary and secondary education that encourages psychomotor learning in a play or movement exploration setting....
in Kaunas
Kaunas
Kaunas is the second-largest city in Lithuania and has historically been a leading centre of Lithuanian economic, academic, and cultural life. Kaunas was the biggest city and the center of a powiat in Trakai Voivodeship of the Grand Duchy of Lithuania since 1413. During Russian Empire occupation...
, Lithuania
Lithuania
Lithuania , officially the Republic of Lithuania is a country in Northern Europe, the biggest of the three Baltic states. It is situated along the southeastern shore of the Baltic Sea, whereby to the west lie Sweden and Denmark...
. It has the university status. Since its establishment, the academy is headquartered in Žaliakalnis
Žaliakalnis
Žaliakalnis is an elderate in Lithuania's second largest city, Kaunas. Žaliakalnis is located north of the old town and the downtown area, between the Neris and Girstupis rivers...
neighbourhood of Kaunas, in close proximity to the Kaunas Sports Hall
Kaunas Sports Hall
Kaunas Sports Hall , also known as the S. Darius and S. Girėnas Hall is the second largest arena of Kaunas, Lithuania. It is the first arena built in the residential Žaliakalnis neighbourhood of Kaunas specially for basketball in Europe and is referred to as a "Mecca of the Lithuanian basketball"....
and the S. Darius and S. Girėnas Stadium, adjacent to the Ąžuolynas
Ažuolynas
Ąžuolynas is a public park in Lithuania's second largest city, Kaunas, in the Žaliakalnis neighbourhood. The park covers about 63 hectares and is the largest urban stand of mature oaks in Europe. Vydūnas Alley serves as the park's northern border. It is a popular recreational destination for the...
Park.

The different University sports clubs are set up at the Academy: football clubs LKKA ir Teledema Kaunas
LKKA ir Teledema Kaunas
FK Atletas Kaunas is a Lithuanian football club from the city of Kaunas. The majority of the players is recruited from the Lithuanian Academy of Physical Education. LKKA ir Teledema earned promotion to the A Lyga, Lithuanias top football division, for the 2009 season after FBK Kaunas and Atlantas...
, basketball
Basketball
Basketball is a team sport in which two teams of five players try to score points by throwing or "shooting" a ball through the top of a basketball hoop while following a set of rules...
clubs Viktorija and Atletas, handball
Team handball
Handball is a team sport in which two teams of seven players each pass a ball to throw it into the goal of the other team...
club LKKA–Žalgiris, weightlifting club Lokys, volleyball
Volleyball
Volleyball is a team sport in which two teams of six players are separated by a net. Each team tries to score points by grounding a ball on the other team's court under organized rules.The complete rules are extensive...
club Svaja, Greco-Roman wrestling
Greco-Roman wrestling
Greco-Roman wrestling is a style of wrestling that is practised worldwide. It was contested at the first modern Olympic Games in 1896 and has been included in every edition of the summer Olympics held since 1908. Two wrestlers are scored for their performance in three two-minute periods, which can...
club Lokys, swimming
Swimming (sport)
Swimming is a sport governed by the Fédération Internationale de Natation .-History: Competitive swimming in Europe began around 1800 BCE, mostly in the form of the freestyle. In 1873 Steve Bowyer introduced the trudgen to Western swimming competitions, after copying the front crawl used by Native...
club Kiras, sports aerobics club Šėlsmas.