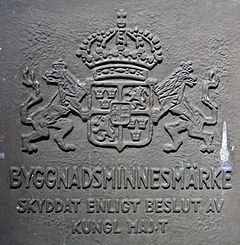 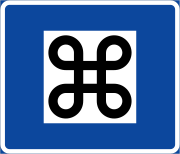 A listed building in Sweden enjoys the strongest legal
Law
Law is a system of rules and guidelines which are enforced through social institutions to govern behavior, wherever possible. It shapes politics, economics and society in numerous ways and serves as a social mediator of relations between people. Contract law regulates everything from buying a bus...
cultural and historical protection available. Listed buildings range widely from mediaeval castle
Castle
A castle is a type of fortified structure built in Europe and the Middle East during the Middle Ages by European nobility. Scholars debate the scope of the word castle, but usually consider it to be the private fortified residence of a lord or noble...
s to a cinema
Movie theater
A movie theater, cinema, movie house, picture theater, film theater is a venue, usually a building, for viewing motion pictures ....
from the 1950s. The listing is not restricted to buildings per se; park
Park
A park is a protected area, in its natural or semi-natural state, or planted, and set aside for human recreation and enjoyment, or for the protection of wildlife or natural habitats. It may consist of rocks, soil, water, flora and fauna and grass areas. Many parks are legally protected by...
s, garden
Garden
A garden is a planned space, usually outdoors, set aside for the display, cultivation, and enjoyment of plants and other forms of nature. The garden can incorporate both natural and man-made materials. The most common form today is known as a residential garden, but the term garden has...
s or other sites of cultural or historical significance are also protected by law. Listed buildings recount the passage of history and how Swedish society has changed over time. More than 2,000 buildings and sites have been protected as listed buildings in Sweden.

The purpose of listing buildings and environments is to protect traces of history that have had great significance for the understanding of today's society and to guarantee people's access to the Swedish cultural heritage
Cultural heritage
Cultural heritage is the legacy of physical artifacts and intangible attributes of a group or society that are inherited from past generations, maintained in the present and bestowed for the benefit of future generations...
. To protect the cultural and historical value of the buildings, Swedish law provides protective measures to be taken for each such listed building or site.

There are two kinds of listed buildings: individual and government.

The County Administrative Boards of Sweden
County Administrative Boards of Sweden
A County Administrative Board is a Government appointed board of a County in Sweden. It is led by a Governor or Landshövding appointed for a term of six years and the list of succession, in most cases, stretches back to 1634 when the counties were created...
have the authority, through the third chapter of the Cultural memory law, to list those buildings and sites whose "cultural and historical value is especially notable or which are part of a especially notable site". This can pertain to personal housing as well as industrial buildings, parks and bridge
Bridge
A bridge is a structure built to span physical obstacles such as a body of water, valley, or road, for the purpose of providing passage over the obstacle...
s.

The County Administrative Boards decide whether a building is to be listed. Anyone can initiate the process deciding about a listing with the county. The County Board also has the authority to initiate such processes on its own initiative, and to rule in cases regarding actions that conflict with the protective measures. Private persons who own a listed building have the right to apply for subsidies
Subsidy
A subsidy is an assistance paid to a business or economic sector. Most subsidies are made by the government to producers or distributors in an industry to prevent the decline of that industry or an increase in the prices of its products or simply to encourage it to hire more labor A subsidy (also...
for costs incurred in for instance restorations
Building restoration
Building restoration describes a particular treatment approach and philosophy within the field of architectural conservation. According the U.S...
.

There are over 2,000 individual listed buildings in Sweden.

There are about 260 governmental listed buildings, for example government and court houses, defensive structures such as fortresses, bridges, royal palace
Palace
A palace is a grand residence, especially a royal residence or the home of a head of state or some other high-ranking dignitary, such as a bishop or archbishop. The word itself is derived from the Latin name Palātium, for Palatine Hill, one of the seven hills in Rome. In many parts of Europe, the...
s and lighthouses. The governmental listed buildings are owned by the state and recount important parts of the history of Sweden and its government.

The government of Sweden
Government of Sweden
The Government of the Kingdom of Sweden is the supreme executive authority of Sweden. It consists of the Prime Minister and cabinet ministers appointed by the Prime Minister. The Government is responsible for their actions to the Riksdag, which is the legislative assembly...
decides whether a governmental building or site is to be listed. Riksantikvarieämbetet
Riksantikvarieämbetet
-External links:*...
, the National Heritage Board, submits suggested new governmental listed buildings and is responsible for their maintenance. Objects in Sweden that are listed are protected according to the law of cultural heritage (kulturminneslagen or KML) and the ordinance
Act of Parliament
An Act of Parliament is a statute enacted as primary legislation by a national or sub-national parliament. In the Republic of Ireland the term Act of the Oireachtas is used, and in the United States the term Act of Congress is used.In Commonwealth countries, the term is used both in a narrow...
of governmental listed buildings (förordningen om statliga byggnadsminnen). Decisions regarding listed buildings are announced by Administrative Board in the respective county
Counties of Sweden
The Counties of Sweden are the first level administrative and political subdivisions of Sweden. Sweden is divided into 21 counties. The counties were established in 1634 on Count Axel Oxenstierna's initiative, superseding the historical provinces of Sweden to introduce a modern administration...
. Record keeping is administered by Riksantikvarieämbetet.