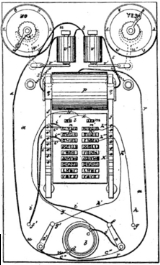 Encyclopedia
Below is a list of Edison patents. Thomas Edison
Thomas Edison
Thomas Alva Edison was an American inventor and businessman. He developed many devices that greatly influenced life around the world, including the phonograph, the motion picture camera, and a long-lasting, practical electric light bulb. In addition, he created the world’s first industrial...
was an inventor who accumulated 2,332 patents worldwide for his invention
Invention
An invention is a novel composition, device, or process. An invention may be derived from a pre-existing model or idea, or it could be independently conceived, in which case it may be a radical breakthrough. In addition, there is cultural invention, which is an innovative set of useful social...
s. 1,093 of Edison's patents were in the United States
United States
The United States of America is a federal constitutional republic comprising fifty states and a federal district...
, but other patents were approved in countries around the globe.

Edison is credited for contributing to various inventions, including the phonograph
Phonograph
The phonograph record player, or gramophone is a device introduced in 1877 that has had continued common use for reproducing sound recordings, although when first developed, the phonograph was used to both record and reproduce sounds...
, the kinetoscope
Kinetoscope
The Kinetoscope is an early motion picture exhibition device. Though not a movie projector—it was designed for films to be viewed individually through the window of a cabinet housing its components—the Kinetoscope introduced the basic approach that would become the standard for all cinematic...
, the dictaphone
Dictaphone
Dictaphone was an American company, a producer of dictation machines—sound recording devices most commonly used to record speech for later playback or to be typed into print. The name "Dictaphone" is a trademark, but in some places it has also become a common way to refer to all such devices, and...
, radio
Radio
Radio is the transmission of signals through free space by modulation of electromagnetic waves with frequencies below those of visible light. Electromagnetic radiation travels by means of oscillating electromagnetic fields that pass through the air and the vacuum of space...
, the electric lamp (in particular the incandescent light bulb
Incandescent light bulb
The incandescent light bulb, incandescent lamp or incandescent light globe makes light by heating a metal filament wire to a high temperature until it glows. The hot filament is protected from air by a glass bulb that is filled with inert gas or evacuated. In a halogen lamp, a chemical process...
), the autographic printer, and the tattoo machine. He also greatly improved the telephone by inventing the carbon microphone
Carbon microphone
The carbon microphone, also known as a carbon button microphone or a carbon transmitter, is a sound-to-electrical signal transducer consisting of two metal plates separated by granules of carbon. One plate faces outward and acts as a diaphragm...
. Most of these inventions were not completely original but improvements of earlier inventions. Many of his patented inventions were actually made by his employees, but Edison did not share credit with his employees. However, one of Edison's major innovations was the first industrial research and development
Research and development
The phrase research and development , according to the Organization for Economic Co-operation and Development, refers to "creative work undertaken on a systematic basis in order to increase the stock of knowledge, including knowledge of man, culture and society, and the use of this stock of...
lab, which was built in Menlo Park and West Orange
West Orange, New Jersey
West Orange is a township in central Essex County, New Jersey, United States. As of the 2010 United States Census, the township population was 46,207...
.

Throughout the 20th century, Edison was the world's most prolific inventor. At the beginning of the century, he held 736 U.S. patents. His final count was 1,093 U.S. patents, including 1084 utility patents (patents for inventions) and 9 design patents. It was not until June 17, 2003 that he was passed by Japanese
Japanese people
The are an ethnic group originating in the Japanese archipelago and are the predominant ethnic group of Japan. Worldwide, approximately 130 million people are of Japanese descent; of these, approximately 127 million are residents of Japan. People of Japanese ancestry who live in other countries...
inventor Shunpei Yamazaki
Shunpei Yamazaki
is a Japanese inventor in the field of computer science and solid-state physics. He holds over 2,647 U.S. utility patents, and in 2005 he was named as most prolific inventor in history by USA Today...
. Yamazaki was subsequently passed by Australian inventor Kia Silverbrook
Kia Silverbrook
Kia Silverbrook is an Australian inventor, scientist, and serial entrepreneur. He is the world's most prolific inventor with 4,097 granted U.S. utility patents as of 23 August 2011...
on February 26, 2008.

The first hundred patents mainly deal with the telegraph system. John Kruesi
John Kruesi
John Kruesi was a Swiss born machinist and close associate of Thomas Edison.-Career:Kruesi had been apprenticed as a clock maker in Switzerland, migrating to the United States where he settled in Newark, New Jersey...
was the shop manager beginning in 1872. Kruesi built models, instruments, and apparatus for Edison's work.
John Ott
John Ott
Dr. John Nash Ott was a photographer and cinematographer who developed many modern photographic practices, including time-lapse photography and full-spectrum lighting.-Photography:...
worked with Edison throughout his career. Ott was Edison's main model and instrument maker. Charles Batchelor
Charles Batchelor
Charles W. Batchelor was an inventor and close associate of American inventor Thomas Alva Edison during much of Edison’s career. He was involved in some of the greatest inventions and technological developments in history....
was a superintendent for Edison toward the end of this series of patents. Jonas Aylsworth worked, from the opening in 1887 of Edison's labs, testing materials for phonograph recordings. 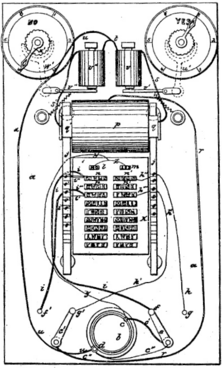 In the second hundred patents, Edison continues his work with the telegraph. He also starts to patent electrical distribution and the light. Francis R. Upton began working for Edison at Menlo Park in 1878. 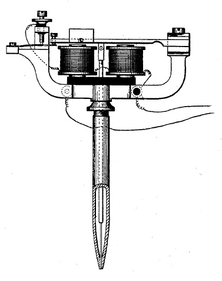 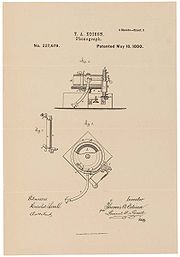 The next series of patents Edison received was mainly for the electrical distribution of power and the electric light. In 1883, Edward H. Johnson
Edward H. Johnson
Edward Hibberd Johnson was an inventor and business associate of American inventor Thomas Alva Edison. He was involved in many of Edison's projects, and was a partner in an early organization which evolved into the General Electric Company, one of the largest Fortune 500 companies in the United...
, a business associate of Edison, persuaded Frank J. Sprague
Frank J. Sprague
Frank Julian Sprague was an American naval officer and inventor who contributed to the development of the electric motor, electric railways, and electric elevators...
to work for Edison. One of Sprague's significant contributions to the Edison Laboratory was the introduction of mathematical methods.

During the timeframe that the next few series of patents were obtained, the esteemed electrical engineer Nikola Tesla
Nikola Tesla
Nikola Tesla was a Serbian-American inventor, mechanical engineer, and electrical engineer...
worked for Edison in America (beginning in 1884). When Tesla first arrived in the United States, he was offered a job by Edison when the latter saw his letter of recommendation from Charles Batchelor
Charles Batchelor
Charles W. Batchelor was an inventor and close associate of American inventor Thomas Alva Edison during much of Edison’s career. He was involved in some of the greatest inventions and technological developments in history....
which read simply "I know two great men, and you are one of them. This young man is the other". Tesla's work for Edison began with simple electrical engineering. Eventually Tesla earned the respect of Edison and undertook a complete re-design of the Edison company's DC dynamo
Dynamo
- Engineering :* Dynamo, a magnetic device originally used as an electric generator* Dynamo theory, a theory relating to magnetic fields of celestial bodies* Solar dynamo, the physical process that generates the Sun's magnetic field- Software :...
s. Lewis Latimer also was under the employ of Edison companies (though never working with Edison).

Before losing the War of Currents
War of Currents
In the "War of Currents" era in the late 1880s, George Westinghouse and Thomas Edison became adversaries due to Edison's promotion of direct current for electric power distribution over alternating current advocated by several European companies and Westinghouse Electric based out of Pittsburgh,...
, Edison continued to patent electrical distribution circuits and methods. He also continued to patent improvements in telegraphy, phonography, and lighting. Reginald Fessenden
Reginald Fessenden
Reginald Aubrey Fessenden , a naturalized American citizen born in Canada, was an inventor who performed pioneering experiments in radio, including early—and possibly the first—radio transmissions of voice and music...
served as an electrician and a chemist for Edison. Fessenden left the Edison's lab around 1889. Arthur Edwin Kennelly
Arthur Edwin Kennelly
Arthur Edwin Kennelly , was an Irish-American electrical engineer.-Biography:Kennelly was born December 17, 1861 in Colaba, in South Mumbai, India and was educated at University College School in London. He was the son of an Irish naval officer Captain David Joseph Kennelly and Catherine Gibson...
contributed to a variety of Edison's endeavors undertaken to create a unique product or service from 1887 to 1893. Walter S. Mallory started working for Edison in 1888 (or 1889). Tesla was still working for Edison, but leaves before the end of this series of patents (ending his employ around 1886).

This series of patents mainly focus on the phonograph, telegraphy, telephone, and electrical generation and distribution.

This series of patents contain patents for the phonograph, lamps, telephone, dynamo systems, motors, and locomotives.

Around these patents issuances, Thomas Armat
Thomas Armat
Thomas J. Armat was an American mechanic and inventor, a pioneer of cinema best known through the co-invention of the Edison Vitascope.-Biography:...
joined Edison and sold him the patents to the machine known as the Vitascope
Vitascope
Vitascope was an early film projector first demonstrated in 1895 by Charles Francis Jenkins and Thomas Armat. They had made modifications to Jenkins patented "Phantoscope", which cast images via film & electric light onto a wall or screen...
.

Alvin Caskey was working under the direction of Edison during these patents. Toward the end of this series of patents, Ott was the superintendent of experimenters for Edison.

This series of patents focus mainly on the phonograph and other talking-machines. There are several battery patents included in this portion of legal protections.