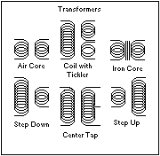 Overview
A coil is a series of loops. A coiled coil is a structure in which the coil itself is in turn also looping.
An electromagnetic coil (or simply a "coil") is formed when a conductor (usually an insulated solid copper wire
Wire
A wire is a single, usually cylindrical, flexible strand or rod of metal. Wires are used to bear mechanical loads and to carry electricity and telecommunications signals. Wire is commonly formed by drawing the metal through a hole in a die or draw plate. Standard sizes are determined by various...
) is wound around a core or form to create an inductor
Inductor
An inductor is a passive two-terminal electrical component used to store energy in a magnetic field. An inductor's ability to store magnetic energy is measured by its inductance, in units of henries...
or electromagnet
Electromagnet
An electromagnet is a type of magnet in which the magnetic field is produced by the flow of electric current. The magnetic field disappears when the current is turned off...
. One loop of wire is usually referred to as a turn, and a coil consists of one or more turns.

I want to model an elliptical rogowski coil for low frequency application(50Hz). Can anybody give me the expressions for lumped parameters (R,L,C) for...
More
x