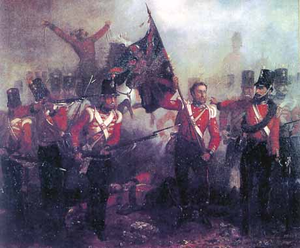 In 1854, the Crimean War broke out between the Russian Empire
Russian Empire
The Russian Empire was a state that existed from 1721 until the Russian Revolution of 1917. It was the successor to the Tsardom of Russia and the predecessor of the Soviet Union...
and an alliance of France, Great Britain, the Kingdom of Sardinia
Kingdom of Sardinia
The Kingdom of Sardinia consisted of the island of Sardinia first as a part of the Crown of Aragon and subsequently the Spanish Empire , and second as a part of the composite state of the House of Savoy . Its capital was originally Cagliari, in the south of the island, and later Turin, on the...
and the Ottoman Empire
Ottoman Empire
The Ottoman EmpireIt was usually referred to as the "Ottoman Empire", the "Turkish Empire", the "Ottoman Caliphate" or more commonly "Turkey" by its contemporaries...
. One of the first battles of the War was the Battle of the Alma where allied forces convincingly defeated the Russian forces. The Siege of Sevastapol followed shortly after in September 1854; it was to last for a year at the cost of over 128,000 lives, three quarters of which died from disease. After the siege at Sevastapol, the fighting mainly ceased and on 30 March 1856, after two years of action, the Russians negotiated a Peace Treaty at the Congress of Paris
Congress of Paris (1856)
The Congress of Paris was a peace conference held in Paris, France, in 1856, , between representatives of the great powers in Europe to make peace after the almost three year long Crimean War.- Before the Congress :...
. The Treaty set the Black Sea
Black Sea
The Black Sea is bounded by Europe, Anatolia and the Caucasus and is ultimately connected to the Atlantic Ocean via the Mediterranean and the Aegean seas and various straits. The Bosphorus strait connects it to the Sea of Marmara, and the strait of the Dardanelles connects that sea to the Aegean...
as neutral territory, closing it to all warships, and prohibiting fortifications and the presence of armaments on its shores. The Crimean War led to a number of large-scale changes in the British Army
British Army
The British Army is the land warfare branch of Her Majesty's Armed Forces in the United Kingdom. It came into being with the unification of the Kingdom of England and Scotland into the Kingdom of Great Britain in 1707. The new British Army incorporated Regiments that had already existed in England...
. The sale of commissions came under great scrutiny during the war, especially in connection with the Battle of Balaclava
Battle of Balaclava
The Battle of Balaclava, fought on 25 October 1854 during the Crimean War, was part of the Anglo-French-Turkish campaign to capture the port and fortress of Sevastopol, Russia's principal naval base on the Black Sea...
, which saw the ill-fated Charge of the Light Brigade
Charge of the Light Brigade
The Charge of the Light Brigade was a charge of British cavalry led by Lord Cardigan against Russian forces during the Battle of Balaclava on 25 October 1854 in the Crimean War. The charge was the result of a miscommunication in such a way that the brigade attempted a much more difficult objective...
. This scrutiny eventually led to the abolition of the sale of commissions
Sale of commissions
The sale of commissions was a common practice in most European armies where wealthy and noble officers purchased their rank. Only the Imperial Russian Army and the Prussian Army never used such a system. While initially shunned in the French Revolutionary Army, it was eventually revived in the...
.

The dispatches of William Howard Russell
William Howard Russell
William Howard Russell was an Irish reporter with The Times, and is considered to have been one of the first modern war correspondents, after he spent 22 months covering the Crimean War including the Charge of the Light Brigade.-Career:As a young reporter, Russell reported on a brief military...
during the war highlighted how many acts of bravery and valour by British servicemen went unrewarded. There was a growing feeling amongst the public and in the Royal Court that a new award was needed to recognise incidents of gallantry that were unconnected with a man's lengthy or meritorious service. Queen Victoria
Victoria of the United Kingdom
Victoria was the monarch of the United Kingdom of Great Britain and Ireland from 20 June 1837 until her death. From 1 May 1876, she used the additional title of Empress of India....
issued a warrant
Warrant (law)
Most often, the term warrant refers to a specific type of authorization; a writ issued by a competent officer, usually a judge or magistrate, which permits an otherwise illegal act that would violate individual rights and affords the person executing the writ protection from damages if the act is...
under the Royal sign-manual
Royal sign-manual
The royal sign manual is the formal name given in the Commonwealth realms to the autograph signature of the sovereign, by the affixing of which the monarch expresses his or her pleasure either by order, commission, or warrant. A sign-manual warrant may be either an executive actfor example, an...
on 29 January 1856 (gazetted
London Gazette
The London Gazette is one of the official journals of record of the British government, and the most important among such official journals in the United Kingdom, in which certain statutory notices are required to be published...
5 February 1856) that officially constituted the VC. The order was backdated to 1854 to recognise acts of valour during the Crimean War
Crimean War
The Crimean War was a conflict fought between the Russian Empire and an alliance of the French Empire, the British Empire, the Ottoman Empire, and the Kingdom of Sardinia. The war was part of a long-running contest between the major European powers for influence over territories of the declining...
. The first awards ceremony was held on 26 June 1857 where Queen Victoria invested 62 of the 111 Crimean recipients in a ceremony in Hyde Park.

In the first citations of the VC, particularly those in the first gazette of 24 February 1857, there are multiple actions commended for many individuals. The details of each action are varied between each recipient, some specify the actual date, some the name of the battle and others have both sets of information. The original Royal Warrant
Royal sign-manual
The royal sign manual is the formal name given in the Commonwealth realms to the autograph signature of the sovereign, by the affixing of which the monarch expresses his or her pleasure either by order, commission, or warrant. A sign-manual warrant may be either an executive actfor example, an...
did not contain a specific clause regarding posthumous awards, although official policy was to not award the VC posthumously. Between 1897 and 1901, several notices were issued in the London Gazette
London Gazette
The London Gazette is one of the official journals of record of the British government, and the most important among such official journals in the United Kingdom, in which certain statutory notices are required to be published...
regarding soldiers who would have been awarded the VC had they survived. In a partial reversal of policy in 1902, six of the soldiers mentioned were granted the VC, but not "officially" awarded the medal. In 1907, the posthumous policy was completely reversed and medals were sent to the next of kin of the six officers and men. The Victoria Cross warrant was not officially amended to explicitly allow posthumous awards until 1920 but one quarter of all awards for the First World War were posthumous.